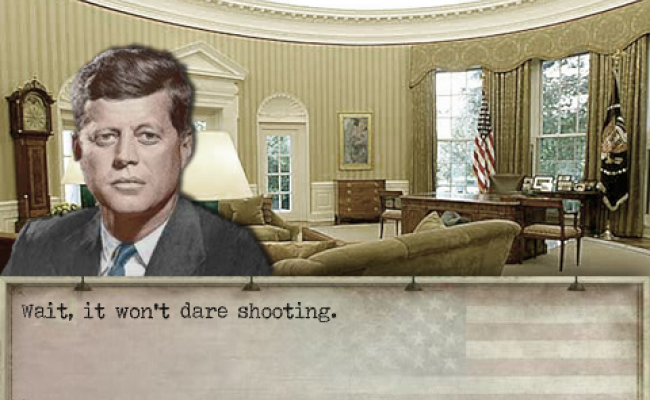 For those of us old enough to remember it, the Cold War was a scary time. Day after day, we lived under the phantom threat of nuclear war – and at no time did we ever come closer than in October of 1962. During that time, the Soviet Union began to set up medium and intermediate range ballistic nuclear missiles on the island of Cuba. America was under the leadership of President Kennedy, and Kennedy had to make some tough choices. Given the same situation, could you do the same?

Cuba’s Days is a simple piece of interactive fiction that challenges players to take up the mantle of John F. Kennedy during the toughest thirteen days of his presidency. Cuba’s Days is also a poorly written, grammatical nightmare. You don’t even have to boot up the game to discover the problems here – on the App Store, the game is listed as “CUBAS DAYS.” If the developers don’t know the difference between a possessive and a plural, you know you’re going to be in for a rough ride. 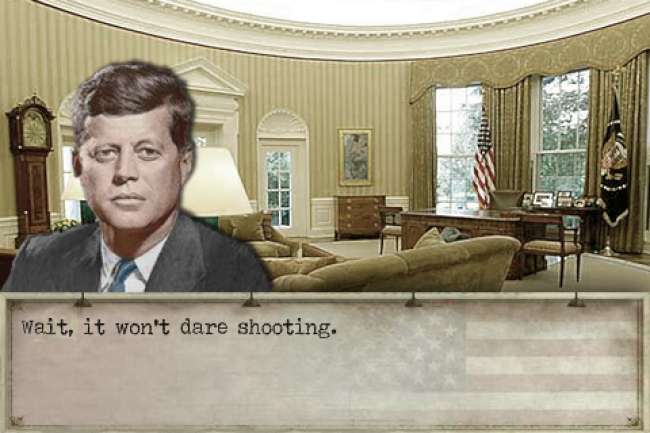 “Wait, it won’t dare shooting.” “Yes, what is you idea?” President Kennedy was one of the most well-spoken public speakers of the 20th century, so it’s doubly offensive to hear such grammatical atrocities pouring out of the late great JFK’s mouth. The bad grammar goes beyond just the president though – it permeates every corner of Cuba’s Days, from presidential aides to newspaper articles and everything in between. Even the main menu has an option labelled “Informations.” It would have only taken a simple spell-check in Microsoft Word to have caught that.

The gameplay itself is fairly run of the mill, but had it been joined by well-written text, it could have truly been captivating. During each day of the Missile Crisis, players will make some tough executive decisions. After being presented with a scenario based on real life events (Rudolf Anderson’s U-2 is shot down by Cuba, for example), players will select an option from a decision tree. Most of these are clear enough to be understood, but even here poor grammar and word choices can lead to a bit of confusion.

At the end of the game, you’ll be given a score based on how well you’ve performed. Instead of just giving you a numerical value, your score will come complete with a sentence that compares you to another of history’s great presidents. In yet another misguided turn of design, these scores have no real correlation to what’s transpired in the game. For instance, when I decided to go all out and nuke Moscow, I was told I was “scandalous but good like Clinton.” Maybe I slept through most of the 90’s, but I’m pretty sure someone would have woke me if Clinton had launched us into nuclear war. 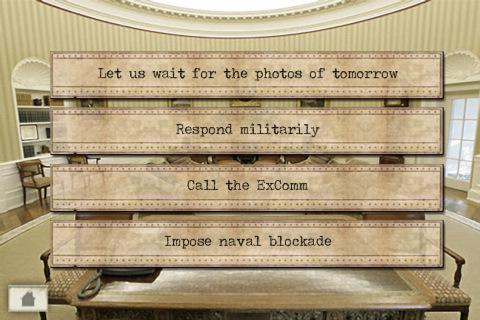 There are other less notable flaws with the game as well. For example, there’s a total lack of audio. There’s also no way to scroll back to previous text – a single tap on the screen advances you, but there’s no mechanic to reverse that decision if you want to re-read the scenario before making your choice. Compared to everything else though, these complaints are small potatoes.

Cuba’s Days is a shining example of a brilliant concept marred by poor execution. As both a history buff and a fan of interactive fiction, the idea of playing out different scenarios surrounding the Cuban Missile Crisis had me frothing in anticipation. Instead, what I was left with was a fairly amateur experience rife with confusing and downright incorrect grammar.

Here’s a word of advice to developers: if you struggle with English, you probably shouldn’t be working on an English-language text-driven story game – at least not without the help of a localization expert.