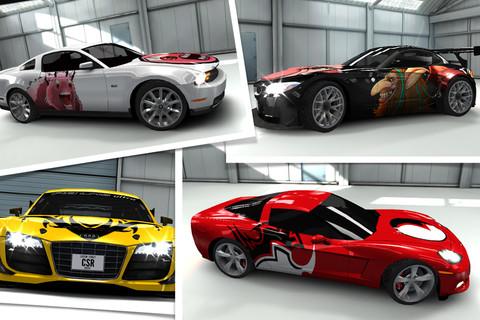 CSR Racing looks and plays great, but the waits are a drag

With its short but exciting matches, drag racing seems the perfect subject for racing games on mobile devices, so it’s a little surprising that we’re just now seeing the genre make some headlines. Android delivered Drag Racing earlier this year, and now iOS users have access to the impressive CSR Racing. In short, it makes Drag Racing look like a cave painting beside a Rembrandt.

For one, it’s a looker. If you’ve never believed that a Ford Focus could be an object of beauty, then you’ll be pleasantly surprised by the way light reflects off your hubcaps and how you can customize each of its many licensed cars. CSR Racing looks better than some games from the precious console generation. For another, the roughly 15 second matches are fun and intense, and revolve around shifting gears at exactly the right time. It’s a shame that CSR Racing simplifies the process by switching on a green light at the best moment, but there’s still some challenge involved in nailing it for the win.

Still, that relative ease of gameplay is probably why there’s no online multiplayer mode; instead, you merely test your racing skills against the computer. If you’re anything like me, that knowledge might take out much of the fun.

It also leaves you idling. CSR Racing is built on the standard freemium model we’ve been seeing since FarmVille and its ilk came out, which means an energy bar limits your plays. Here, it’s called a gas tank, but that still means you need to wait or fork out some cash if you want to keep playing soon after you run out. You also have to wait for 10 minutes every time you purchase a new car (and yes, that’s with the app running), which can prove irritating if you’re the type of hot-blooded player who’s attracted to drag racing games in the first place. 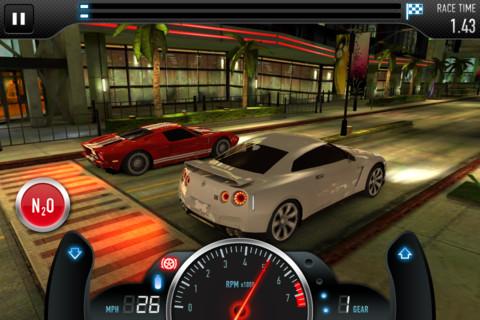 In-game currency accumulates with all the speed of a dolphin on a dirt road, so you’ll probably have to spend real money for cars if you don’t feel like waiting. The good news is that spending premium currency never feels necessary apart from speeding up the time between matches–in fact, it feels so unnecessary that I wonder if the developers would have been better off charging at least a dollar for the app.

For all that, CSR Racing is more than worth a look if you’re looking for a racing game that doesn’t require you to set aside five minutes to get the most out of it. Indeed, most races are so short that I once used it as a form of toin-coss: if I won, I’d go get something to eat; if I lost, I’d take my diet more seriously and skip it. (Alas, I lost.) Just be prepared to pay if you want to sample the absolute most it has to offer. In the absence of an online multiplayer component, you may find that amassing a huge collection of cars and customization just isn’t worth the cost.