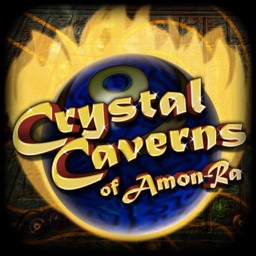 It’s probably for the best that Amon Ra, Ancient Egypt’s sun god, isn’t around anymore. If he could see his name in Crystal Caverns of Amon Ra, I’m pretty certain that he’d rain fire down on the land from his sky barge. Honestly, he’d be pretty justified, because this new game for the Mac isn’t worthy of his association.

In a nutshell, Crystal Caverns of Amon Ra is a poor-man’s clone of Zuma, right down to the marble-busting amidst the setting of an ancient civilization. Unfortunately, it seems like the clone should have sat in the vat for a little longer, because this isn’t going to wow anyone.

Each level features a meandering track with waves of marbles rolling towards a ball of fire (or a lava pit — it’s never really explained other than the marbles will burn up if they hit it). Your job is to shoot more marbles at the track, engaging in match-three gameplay to remove all the baubles from the map. At random intervals, upgrades drop down from the top of the screen with little warning; if you’re able to catch them, you earn temporary ammunition upgrades with different effects like stopping time, reversing the marbles’ movement, or creating a black hole that will swallow up a large number of marbles before it goes away. It’s all pretty standard stuff, but it’s not even remotely inspired.

The main problem with this game is that it’s just not fun. The marble tracks show little imagination or creativity in their designs. They’re only challenging because they’re often so short, meaning you barely have any time to clear a level. At first, the tracks are just short; after a while, they become even more irritating because they have overlapping sections and/or warp portals.

When you shoot a marble at an area on the map with an overpass, it won’t make contact with anything; I realize that figuring out a way to make this work is a challenge, but having the marble fly past everything is not the solution. The warp portals present the same problem: if you shoot a marble into a portal, (or, at times, just too close to) it’ll either disappear or unpredictably be added to the marble train.

The production values are also pretty underwhelming, unless you like staring at fake stone walls over and over again. Things change up a little, with varied hieroglyph and spider web placement, but it gets boring pretty quickly. Not only that, but there seemed to be some occasional tearing with the game’s graphics, where jagged edges would obscure the track. The music works well enough, but it’s nothing special and it quickly becomes boring and repetitive within a couple of levels.

The game does contain a lot of content to play through. There are over a thousand different levels, bug good luck accessing them all, especially if you end up exiting the game and then re-opening it. Several times, I would play through over a dozen levels, quit, and come back to the game a couple of hours later only to find my progress wasn’t auto-saved. Instead, I’d find myself back at the same level I’d started at the last time I’d booted up the game. There’s no way around this either, when you pause the game, there isn’t a save option in the menu.

There’s no reason to pick up Crystal Caverns of Amon Ra unless you’re a marble-shooter fanatic.Yes, it’s got a ton of levels, but the design is shallow and frustrating, the visuals are underwhelming, and the gameplay often feels borderline-broken. Save yourself a few bucks and a lot of irritation; give this a pass.