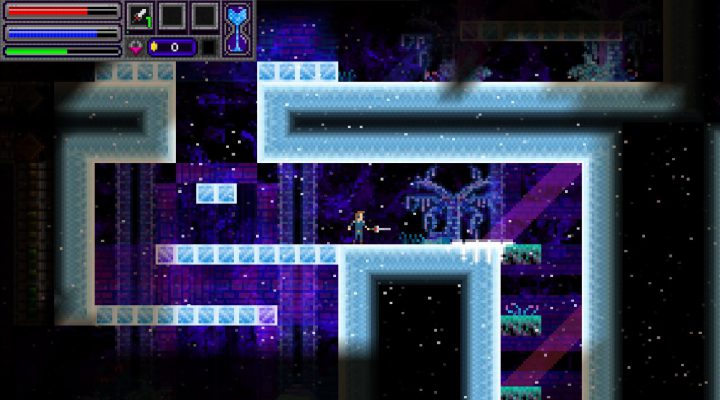 Wide assortment of enemy types to match the levels.

Nearly two years ago, Crystal Catacombs blew past its $7,500 Kickstarter goal, going on to collect over $16,000 in funding. Now, after years of development, Crystal Catacombs seeks to deliver players a vintage gaming experience, heavily inspired by Super Metroid and Castlevania.

Crystal Catacombs is one of those games that will test your patience. The blistering difficulty has been taken into consideration by the developers, and the “normal” game mode equips player with five lives, something of an anomaly for the roguelike genre. Two higher difficulty modes are also available, as well as a survival mode that keeps score of the player’s best runs.

Players start out each run by picking one of five zones: Lost Jungle, Ice Fortress, the Pitt, Keepenstein, and Deep Darkness, or as I called them: the jungle map, the snow map, the lava map, the castle map, and the nightmare map, respectively. Each level comes stocked with a handful of nasty critters which range from slow moving green caterpillars to giant Frankenstein-like monsters that shoot electricity around. Each playthough is randomly generated so while the zones keep the same theme, the exact layout will vary. Treasure rooms are scattered throughout each map and reward players with loot. 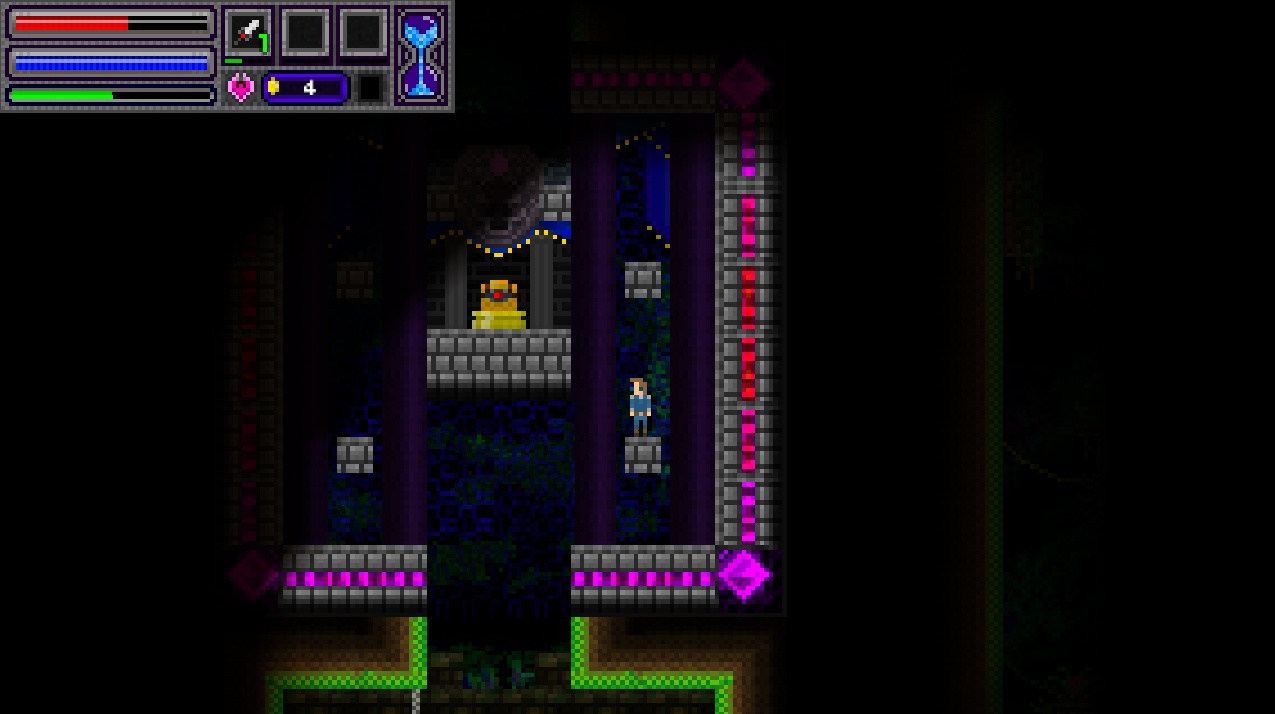 That reward, believe it or not, is my first issue with Crystal Catacombs. The drop rates are incredibly low. After six hours of playing Crystal Catacombs, I have not found a single weapon. Now, I’m not expecting to find Excalibur after squishing some grunts in the first room, but hours with nothing is just silly. The publisher even admitted to me that finding good loot in Crystal Catacombs is a rare occurrence. If it weren’t for the gameplay trailer, I wouldn’t believe there was anything else available beyond the starter sword. It doesn’t help that, following roguelike tradition, any gear I find is lost upon death.

To make matters worse, the starter sword is about the worst thing to use against most of the monsters in the game. Melee attacks against the enemies that take more than one hit to kill will usually result in Vasil taking damage, simply because he can’t attack fast enough to kill the monster before it retaliates. In order to combat the tougher enemies, especially the ones with ranged attacks, the player will need to dash in, attack, and dash away three or four times, to dispatch the foe, —a very passive and, with the clock ticking, time-wasting practice. Maneuvering around or avoiding enemies is largely impossible due to the constrictive nature of the game’s levels.

Further complicating the mobility of Vasil is Crystal Catacombs’ rigid controls. The stiff movement, dreary attack speed, and the clumsy dance we know as The Wall-Jump, resulted in ever-increasing amounts of frustration. Playing with a game controller (godspeed to the brave souls playing with a keyboard), Vasil was over-jumping platforms and falling awkwardly short of otherwise attainable wall-jumps. Don’t even remind me about the snow map and all the slippery ice everywhere.

The enemies themselves are easily the best part of the game. Each of the five zones features a handful of creeping monsters that help add a distinct feel to the zone. My personal favorite, the jungle map, featured plenty of spiders, giant bugs, and goo blobs, while the castle map had goblins, bats, and ghosts. It was fun encountering new monsters as each one required a slightly different strategic approach. Sadly, in combating them, I often lost due to the controls and overall pathetic nature of the sword combat. 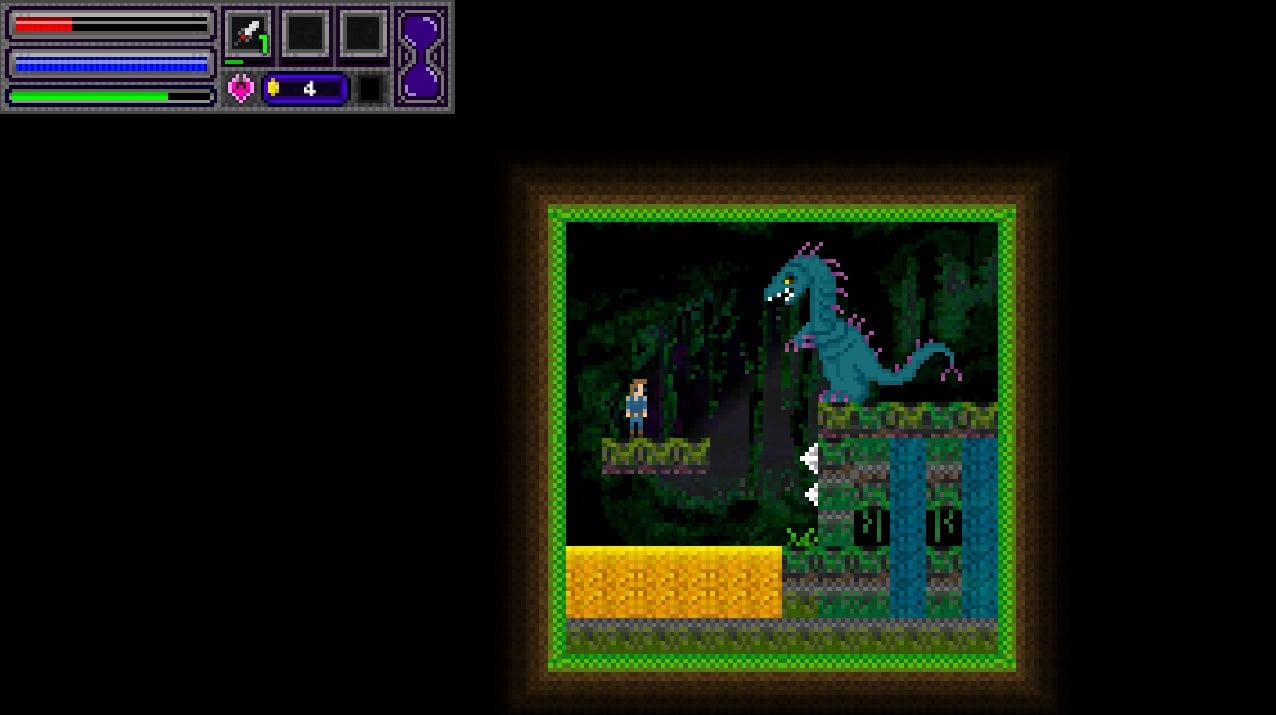 For whatever reason, killing monster yields gold and experience points. Crystal Catacombs explains absolutely nothing, and honestly, I couldn’t figure out what I was exactly leveling up or how it affected me in any way. I’m still not sure what I’m supposed to do with the gold, or the little blue and purple orbs I pick up from dead enemies. While I dislike a game hand-holding me through the experience, at the same time, nothing irks me more than unexplained mechanics.

There are some people out there who will love Crystal Catacombs. They can tank through the controls and make do with the sword. They will break their thumbs a hundred times over to get that perfect run, but they’ll do it and probably pull in a few hundred views on YouTube. But for the rest of us, unless you’re seriously itching for a new roguelike, you’re better off taking a pass.