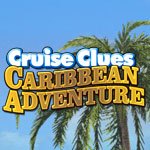 Cruise Clues: Caribbean Adventure is just another HOG that does not float above the water.

Most recent hidden object games have tried to switch up the formula a bit, adding new twists and features to the well-worn genre. But that’s not the case with Cruise Clues: Caribbean Adventure, which is instead about as straightforward as a HOG can get. It’s a strictly linear experience, with an underdeveloped story and a few generic mini-games holding it all together.

You play as Angelina, an FBI agent who’s tracking down an elusive jewel thief known only as the King of Diamonds. Most of the game will be spent searching for him throughout a Caribbean cruise ship, but you’ll also get the chance to explore the odd beach and even do some underwater investigation. And, for some reason, despite the fact that she’s an FBI agent, Angelina will also have to help ship staff do everything from find lost luggage to clean up a nightclub. There isn’t much to the story, as the tale is pretty straightforward and filled with a few very underdeveloped characters. It also ends incredibly abruptly, so there isn’t even a satisfying conclusion. It’s relayed via dialog between Angelina and the other characters, and, thankfully, it’s pretty easy to quickly skip past these moments if you want to.

Pretty much all of your time with Cruise Clues will be spent scouring still scenes on the lookout for hidden objects. You’re given a list of things to find, and when you’ve got them all, the game moves right along to the next scene. There are no multiple paths to choose from, instead you’re simply along for the ride. The HOG segments of the game are, for the most part, fairly easy, though the game does add a few wrinkles to up the difficulty. Some objects are hidden underneath other objects, so in these instances you won’t be able to find one until the other has been cleared out of the way. Occasionally you’ll also have to find a tool in order to get access to a hidden object. For the most part these are fairly easy to solve, such as finding a key to open a locked cabinet, while other times what you need to find doesn’t necessarily make much sense. Seriously, who uses a seashell to dig for treasure?

The only breaks in the object finding action comes from the odd mini-game that the game throws at you in between scenes. Again, these are pretty straightforward, and consist of traditional HOG mini-games like spot the difference or memory. Curiously, unlike most games in the genre, Cruise Clues doesn’t give you the option to skip these segments. So even if you’re struggling, you’ll be stuck trying to figure out the puzzle in order to progress. However, there is an in-game hint system that does alleviate some of this frustration.

Unfortunately, a lot of the game simply feels lazy. There are no new or interesting features, the story is bland and underdeveloped, and the mini-games are all ones you’ve seen many times before in other games. To make things worse, the game also repeats both locations and objects many times. You’ll constantly be searching for the same objects over and over, and you’ll frequently have to revisit locations several times. Even worse, most of the time objects are still in the same place when you come to a location for a second (or third) time. So if you remember where that seagull was hidden the first time around, you won’t have to do much searching the second.

Visually, Cruise Clues is pleasant if not remarkable. The various areas you’ll be searching are all very detailed, but the art style sometimes makes it difficult to find some objects, as it’s not always easy to determine just what they are. The only real exceptions are the underwater scenes, which look much better than the rest of the game. You might want to play with the sound off though, as the game features an incredibly dull and repetitive, elevator music style soundtrack.

Really, Cruise Clues probably would have been a lot more impressive had it been released several years ago. But as it stands, it’s lacking many of the features that modern HOG fans expect. You can’t skip puzzles, the experience is completely linear, and some of the design choices really make the game feel sloppy. And with a story that isn’t even remotely compelling, there’s little reason to recommend Cruise Clues over the huge library of HOGs already out there.