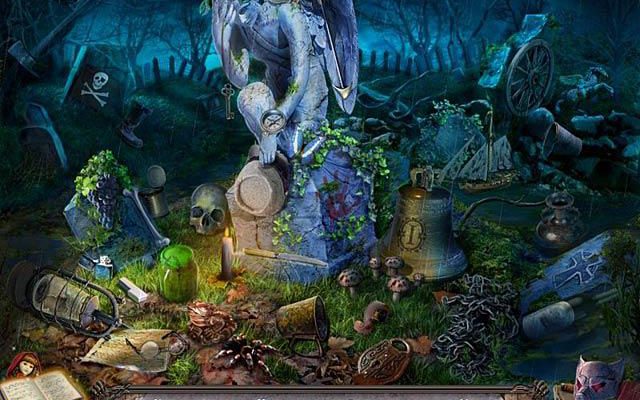 An ordinary hidden object game with a storyline that’s more than a little disturbing.

Looking for a version of Little Red Riding Hood that’s not quite as kid-oriented? Cruel Games: Red Riding Hood spins the tale anew in the form of a hidden object game, setting it in a modern day world with a twisted madman who spends his time kidnapping people and forcing them to act out versions of classic fairytales. It’s dark, often disturbing, and maybe just the thing for a quiet night when you’re ready to scare yourself half to death.

A young woman in red comes home to a dark house one night and is greeted by the ominous voice of Maniac the Storyteller, an apt name if we’ve ever heard one. He has kidnapped her fiancé Kevin and stashed him at the old cemetery, challenging the woman to find him before it’s too late. She’s going to have to play this demented little game if she wants Kevin back, taking on the role of Red Riding Hood and traveling to a series of isolated locations in the middle of the night. And wouldn’t you know it, there’s a big bad wolf prowling around, too! 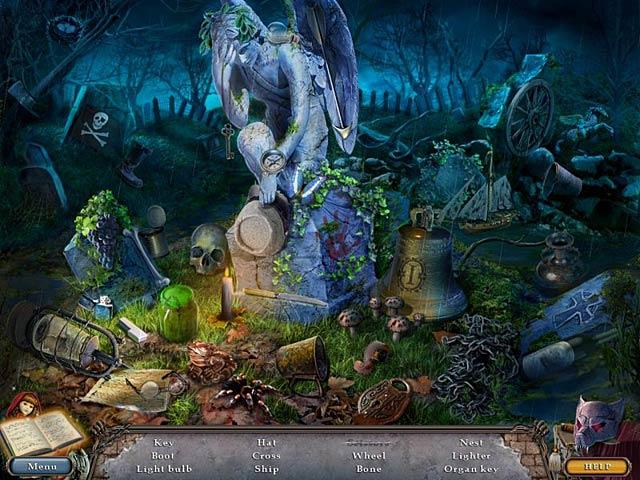 Red Riding Hood alternates areas of exploration with frequent hidden object diversions, allowing you to collect important items both by spotting them on the map as well as by finishing hidden object scenes. Progress forward will be frequently halted by puzzles, most of which are fairly straightforward to complete, especially with the game’s quick-charge hint system. Statue with a missing head? Easy. Locked door with the keys just out of reach? Not a problem. Biker dude needs a leather jacket? Uh, ok! Often, once you set the pieces together, you’ll complete a mini-game to solve the puzzle once and for all. Then it’s on to more creepy places!

Red Riding Hood almost seems to purposefully walk the middle of the road when it comes to content and design, never taking any chances on gameplay, puzzle construction, or even how hidden object scenes are carried out. It’s technically competent and never trips you up with awkward interface choices or unusual navigation, but there are absolutely no surprises to be found. No multi-part hidden objects, no creative item manipulation to solve puzzles. It’s simply a hidden object game, which can be good or bad depending on what you’re in the mood for.

Retreading old locations is one of the gameplay sins Red Riding Hood commits, and not only will you visit the same areas more than once, you’ll swear each new location is just a remix of the previous one. It can’t be easy to diversify locations in a game that takes place outside of a cemetery, but you can never shake the sense of sameness that settles over you after half an hour. 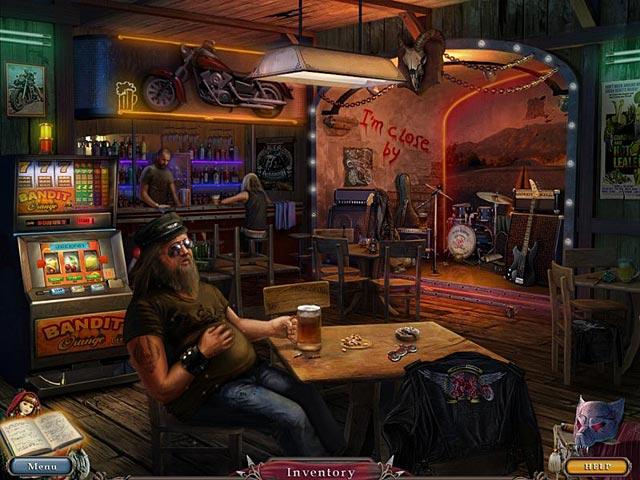 One thing that does stand out in Cruel Games is the story. It’s not particularly original or even very well told, but its core concept is pretty disturbing. Not the kind of disturbing that features zombies leaping out from freshly dug graves; the kind that can wiggle into your brain and become increasingly frightening the more you think about it. A demented madman is stalking a woman, complete with cameras in her house and speakers so he can talk to her whenever he feels like it. Not cool, Maniac the Storyteller. Not cool.

Red Riding Hood is only five chapters long; a bit short even by modern hidden object standards. But when a game sticks this close to established genre patterns, it really doesn’t need to go on any longer. The story has quite a bit of creep value, the settings are well-illustrated if a bit unimaginative, and the interface is snappy and quite easy to use. But every other aspect of the game, from puzzles to repeated mini-games, is almost exactly what you’d find in the other hidden object game on the market.