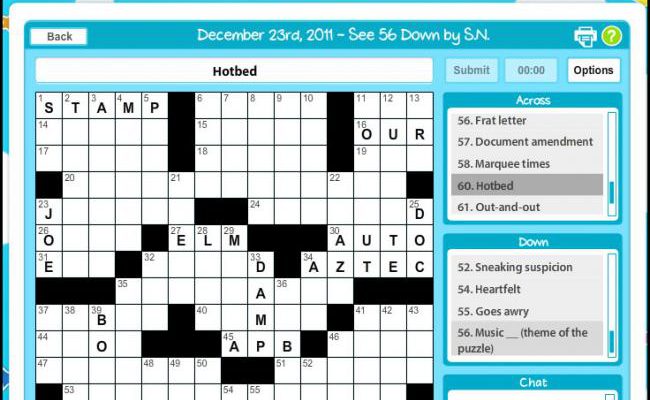 The early years of Facebook featured quite the number of word-based puzzle games, but crosswords tended to be a bit rare. And the genre is still very underrepresented, but a new social games developer by the name of PuzzleSocial is attempting to remedy that with the aptly named Crosswords. Holding rights to several major newspaper puzzles around the United States, the new application allows its players to solve new, complex crosswords on a daily basis.

If you’ve ever attempted to solve one of those massive crosswords in a newspaper or the back of a magazine, then you have pretty much played the game Crosswords. Given dozens of ambiguous clues for vertical and horizontal words, it is a significant test of both your general knowledge and vocabulary. The puzzles are not easy either as PuzzleSocial has the rights to publish the puzzles of major newspapers such as the Washington Post and the New York Times.

While this can make things difficult, you also have the option to choose your best topic from a handful of different categories including Newsday, A.V. Club, CrosSynergy, and celebrity. Respectively, these consist of daily newspaper puzzles, humorous crosswords from The Onion, the Washington Post‘s own puzzles, and one centered around celebrity gossip. What’s more is that each of these categories are updated with a new puzzle daily (though older ones can be replayed at any time). 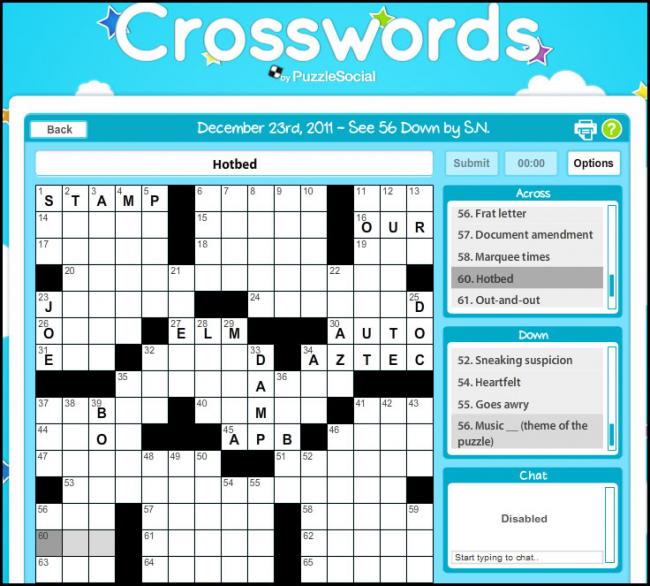 The game is quite challenging, so to help out a bit, it does grant marginal hints, such as highlighting incorrect letters in red. There is also the capability to play cooperatively with another user in the doubles mode. And if you happen to be a connoisseur of such word games, there are also competitive methods of play.

These include a tournament and head-to-head set-up where winners are based on things like speed and accuracy, with the amount awarded or taken away for correct or incorrect answers varying from tournament to tournament. Also, the noted hints are not available in such modes. All that said, these modes require players to buy their way in with the virtual currency of PuzzleTokens ,which can be bought in various amounts using Facebook credits. Currently, however, these are not available to players in every category. There is also competition to be found via the in-game leaderboards. (You can also opt to play the crosswords without having your score submitted.)

There really isn’t much more to say about Crosswords. It isn’t the most extravagant or complex game in the world, and is really more a digital rendition of the classic pen-and-paper versions (in fact, you can print out the crosswords as a PDF if you desire). It has a few nice bonuses such as the multiplayer facets and moderate hints, but will only be enjoyable if you like such puzzles in the first place. If you do, then this new app is a great way to enjoy your favorite pastime.