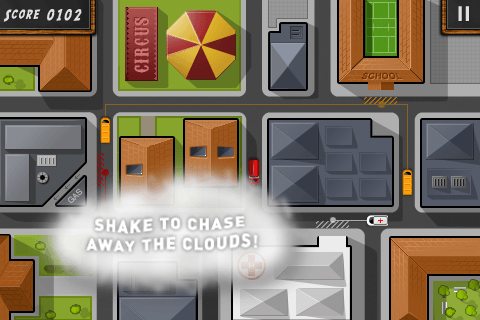 We play traffic warden in our review of CrossRoads

It may be a fairly new genre in the grand scheme of things, but that doesn’t mean the iPhone hasn’t seen dozens, if not hundreds, of line-drawing games. The runaway popularity of Flight Control (maybe that’s “runway” popularity?) has inspired countless clones and play-alikes. It takes something really special to set a line-drawing game apart from the crowd nowadays, and CrossRoads does that with style.

Like most line-drawing games, the object in CrossRoads is to draw lines with your finger that will connect different vehicles to their destinations. Once two vehicles collide, the game is over. Unlike some games in the genre, CrossRoads is all about road vehicles. This means you’ll need to draw your lines along pre-existing streets on the map rather than willy-nilly all over the sky.

CrossRoads may possess a number of similarities to the games that came before it, but it also blazes its own trail with some fairly unique features. The most noticeable of these are the game’s interactive events. Each map will offer up a different event that will in some way impede your progress, and you’ll have to deal with each in a unique way. On one level you may need to guide your vehicles out of the way of a train, while on another you’ll need to break the ice that forms on your screen. There’s a great deal of variety in these maps that make each one unique.

In Japan earthquakes happen regularly, causing rubble and broken bridges. You’ll need to rub on the damaged areas to clear a path for your cars to travel safely. On the Halloween map zombies roam the neighbourhood, and can only be stopped if you hit them with one of your cars. Another map has you shaking your iPhone to clear clouds, while yet another has you popping balloons. The game offers 7 maps at the moment, 3 of which you’ll need to pay extra for as downloadable content.

The themes of these maps vary as much as their gameplay. One map offers up a winter wonderland where players navigate snowmobiles past homes covered in Christmas lights. Another takes you back to the Wild West where you’ll need to guide horse-drawn stagecoaches to their destinations. These cosmetic changes might not affect the gameplay, but that doesn’t make them any less charming or appreciated. A good deal of imagination and care went into these maps, and it shows.

In addition to special events, the game offers up one other feature that makes it different from nearly every line-drawing game that’s come before: multiplayer. Available exclusively over Wi-Fi and Bluetooth (sorry folks, no online play here), players choose a map and each plays their own game to see who loses first. Players can send cars to the other person’s map to clutter their screen and use an assortment of weapons to disrupt their play. It’s a great feature, but unless you’re playing against someone who is equally skilled at CrossRoads expect the competition to feel a little lop-sided. 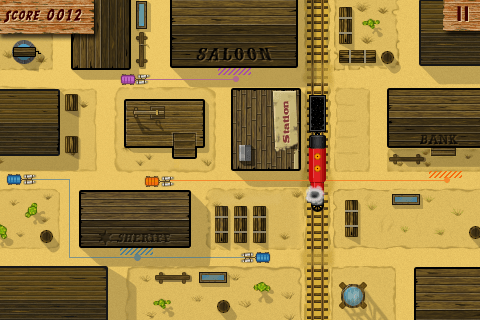 Our only real complaint with CrossRoads is that vehicles move a little slower than we’d like. We’re not saying that cars should be barrelling down the road at a hundred miles per hour, but sometimes it felt like things were moving at a snail’s pace. When the screen is full of vehicles it’s a perfect speed to run at, but when you only have one or two cars on the map? A fast-forward button would have done CrossRoads a world of good.

We would have also loved the opportunity to take the multiplayer online, but that option simply wasn’t available to us. Some games have local multiplayer because it’s better for the gameplay. After spending a few hours with the multiplayer mode, I can’t imagine why this game would be any less fun when played with a stranger half a world away.

We’re delighted to say that CrossRoads did the impossible – it made line-drawing games feel fresh again. If you’re a veteran of games like Flight Control and Harbor Master and you want a new challenge, I can’t imagine a better way to pass your time than with CrossRoads.