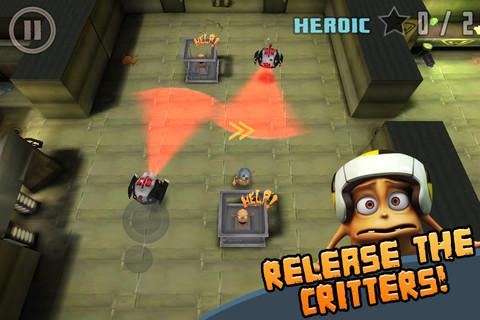 Watching science fail has never been this fun

Ever wonder why extraterrestrial life hasn’t ever landed on earth? Here’s a theory: we’re jerks. It seems the good old government just isn’t keen on letting a cute little alien observe and learn our world in a completely harmless state. Just watch E.T. Then, because E.T. is considered to be one of the worst games of all time, play Critter Escape: an engaging game that’s all about escaping your human captors.

After a fully-rendered 3D cutscene showing the cruelty of science, our goofy little chicken nugget of an alien find himself stuck within the confines of a top secret government lab. It’s up to you to sneak past guards, turn their evil experiments against them, and rescue the other little critters they’ve stolen.

In order to move through each mission, you use the touch screen in order to create a long, flowing path through each top-down level’s maze. Once you let your finger go, your critter follows his path to a T. If things ever start going awry, another tap on the screen will pause the action, allowing you to redirect your route to a safer area.

Missions begin with simple stealth elements (walk around corridors when the guards aren’t looking), but things get much more intense as you get deeper into the lab. Some floors will drop after a brief moment standing on them to reveal hazardous ooze, forcing you to make a route that travels no tile twice. Flame jets will toast your critter, but also give you an opportunity to trick a chasing guard. Rotating robot guards change their field of vision constantly, forcing you to approach extremely carefully before attempting to outsmart them.

Luckily, this escape plan won’t go unaided: it seems that the government’s plan to turn you into a weapon of mass destruction wasn’t such a good idea after all. By collecting various dropped items, you can turn into a guard-beating machine, dash at the speed of light, turn invisible, and even release a cloud of noxious gas from your hind parts. By employing and combining these leftover lab experiments, you can turn the odds against your so-called “genius” captors.

Critter Escape has a staggering amount of playability for a mobile title. It comes out of the gate with over 100 complete levels, each with their own unique gem location and challenge. The gem will often add difficulty into your run by forcing you into dangerous territory, while the challenge might require you to complete a task you wouldn’t want to otherwise, such as alerting all guards in the area of your presence before escaping, or completing a run without touching a single power-up. Completing these challenges builds on whether or not you’ll get a three-star rating on each level, which then adds toward your opportunity to advance to new stage packs.

For each of those elusive gems you pick up across your escape route, you’ll gain a little more purchasing power at the game’s store. Here, you’ll be able to purchase both instant-use and permanent upgrades in the form of power-ups and hats. While I never felt compelled to use the power-ups (every level is provides a fun amount of challenge and can be solved just fine without them), it was hard not to pass up on the Hermes helmet, which gave my critter a permanent speed boost. I never felt like I needed to dig into my wallet, and the game’s gem supply should be plenty to get you whatever hat you’d like to wear.

My only gripe with Critter Escape‘s gameplay is the way it’s presented. Something just doesn’t feel right about constantly pausing the game in order to re-draw a path that ended up causing problems halfway through the run. There’s no way to pan out across the stage to look ahead while you’re drawing, either: if your starting route ends up leading you into a guard that you didn’t see while you were drawing, you’ll have to release your finger and start all over again. It’s not terrible, but I couldn’t help but feel that this was one of those times where a controller might have worked better. 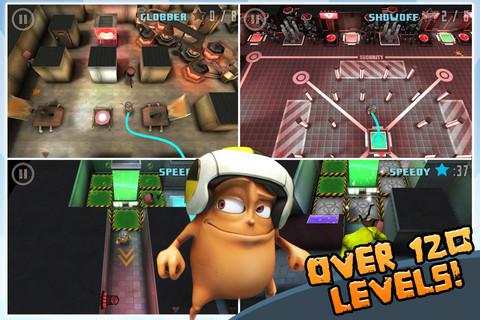 The other issue in Critter Escape is its inconsistent visuals. The main critter himself is well-rendered in the game’s cutscene, as well as when he presents body language to reflect whether you got one to three stars on your escape. However, the in-game graphics are pretty blocky. They aren’t terrible to the point where they’re unbearable, but a higher polygon count would have been a nice icing on the cake.

Critter Escape is what you want out of a mobile puzzle/action game. It has a ton of variation, huge relay value, and a clever concept. You might have minor gripes with its slightly awkward controls and less-than-perfect visuals, but after hours of outsmarting scientists at their own game, you’ll be having too much fun to care.