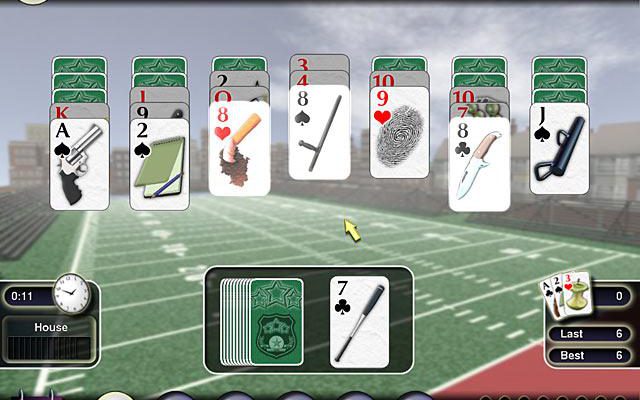 Fun solitaire game with a tacked on crime story

Many times when I play casual card or puzzle games, I just get stuck on how tacked on the story feels. Although players expect their games to have a plot, some types of games just don’t lend themselves to it. For instance, what does solving superficial crimes have to do with playing solitaire cards? I have no idea, but Crime Solitaire tries to connect the dots.

The city of Topley is virtually crime-free. As such, the police have gotten very bad at solving crimes. To give themselves work, the police start enforcing the really obscure goofy laws. That means it’s all hands on deck, investigator-wise, when someone is caught picking flowers in a public park, for example. 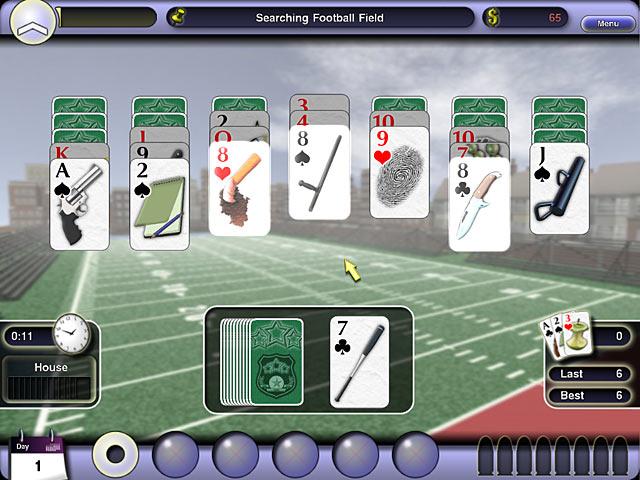 You’ll play an investigators who’s trying to whittle down suspects by traveling around the game using an overhead map while searching locations for clues to solve those cases. Typically you’ll find clues that rule out suspects, and when you have one suspect left you charge them with the crime, then move on to the next case. You do all this sleuthing and investigating by…. playing solitaire at various locations in town.

So, like I said, the connection between story and gameplay is kind of a stretch. There’s just no viable reason given why playing solitaire equates to searching locations for clues, but that’s what’s happening. As for the gameplay – the solitaire itself – it’s pretty standard fare. The cards are laid out in various ways, with some cards facing up and some facing down. You’ll need to pick up cards in ascending or descending order to try and clear everything on the board.

There’s a few differences from the regular old Windows solitaire that we’re all used to. For one, if you run through your draw pile and haven’t cleared all the cards in play, the round is over and you lose. There’s no flipping through the draw pile multiple times. You can also loop around and play a 2 card on top of an Ace and keep the streak going. 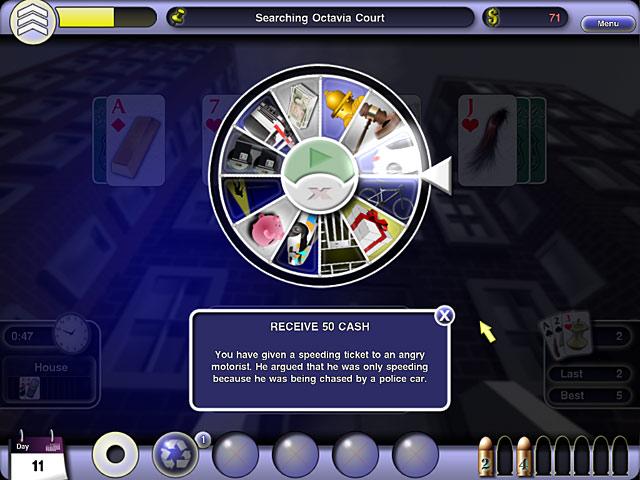 In addition to trying to just clear cards like in regular solitaire, you’ll be scored on various bonuses you can collect, like clearing multiple cards in order or making an entire run from 2 all the way up to the Ace in one shot. You’ll gain some power ups, like “undo” or bullets in a gun (that cop theme again) that can let you place specific cards in the pile to help your strings along.

I’ve knocked the storyline a lot here, and I still maintain it’s totally ridiculous. The solitaire game itself is compelling, with the power-ups and various layouts. The crime side of it basically plays itself, since if you gain enough clues the suspects will weed themselves out automatically. So while that who entire part of the game doesn’t matter the solitaire is good enough to justify to justify checking the game out. Just look elsewhere if you’re expecting to do any crime sleuthing or solving here, because Crime Solitaire is just a solitaire card game.