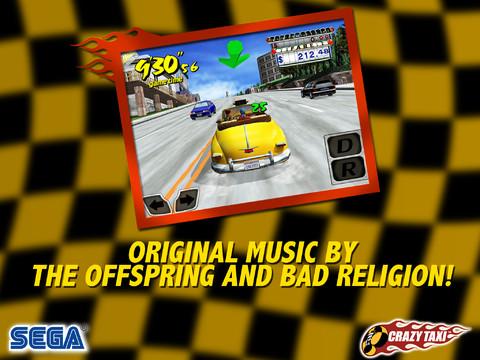 Crazy Taxi is exactly as good as you remember it

Crazy Taxi is a game that’s always held a special place in my heart.  When people talk about the frenzied, accessible gameplay of days gone by, my mind often goes to the days I’d plunk quarter after quarter into Crazy Taxi at the arcades.  Then later, I’d sink hour after hour into the Dreamcast release.  Even as recently as Steam’s Big Picture release last month, I found myself getting back behind the wheel of a taxi cab.  So when SEGA tipped us off about an iOS release, you’d better believe I jumped at the chance to check it out.

In case you’re new to the franchise (and considering how long ago it debuted, I’m going to bet that some of you reading this are), Crazy Taxi puts players in the driver’s seat of their very own taxi cab.  You’ll need to pick up fares and drive them to their destinations as quick as is humanly possible.  The more passengers you deliver, the more money you’ll make – and since that money is your score, making more is always a good thing.

Players net bonus cash for speedy deliveries, as well as for performing dangerous driving maneuvers that would put Days of Thunder to shame.

Since the game is meant to be digested in short bursts, it’s a perfect match for pocket gamers – and the smooth controls manage to seal the deal.  Being an “arcade” driving simulation, the controls here were never too complicated to begin with – but the on screen buttons for left and right, as well as an accelerate and reverse button, are easy to reach and responsive to use.  It’s the sort of game that feels like second nature as soon as you touch it, even if you’ve yet to learn some of the more advanced tricks that will help you let out all that pent up road rage. 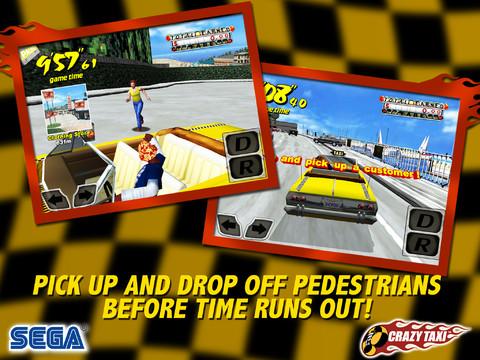 Despite all of the fun the game offers, if you’ve played it before, you’re going to find the iOS version of Crazy Taxi feels eerily familiar.  In fact, with the exception of its Retina Display clean-up and touch screen controls, the iOS version of Crazy Taxi is indistinguishable from the 2000 Dreamcast release (which we’ve seen ported time and time again).  And while this fact alone will make it worth a purchase for most veteran cabbies out there, I can’t help but feel there are better uses for this franchise than simply re-porting the game over and over to new devices.

Ignoring the fact that nobody ever thinks to port the game’s sequels to new platforms (who wouldn’t want to drive around in Crazy Taxi 3‘s Las Vegas setting?), the basics of Crazy Taxi seem desperate for a modern makeover.  Why not create a new game with randomized passengers, or even better, randomized maps?

The iOS version of Crazy Taxi is a hard game to judge.  On the one hand, it’s a pitch perfect port. It’s the kind of port that makes me wish more classic driving games would come to the App Store (Burnout, I’m looking at you).  On the other hand, the Crazy Taxi license has so much untapped potential that it’s killing us that SEGA isn’t doing more with it.  This release proves that the Crazy Taxi formula is a fantastic fit for mobile gamers… but SEGA needs to think about putting some new tires on this old cab.