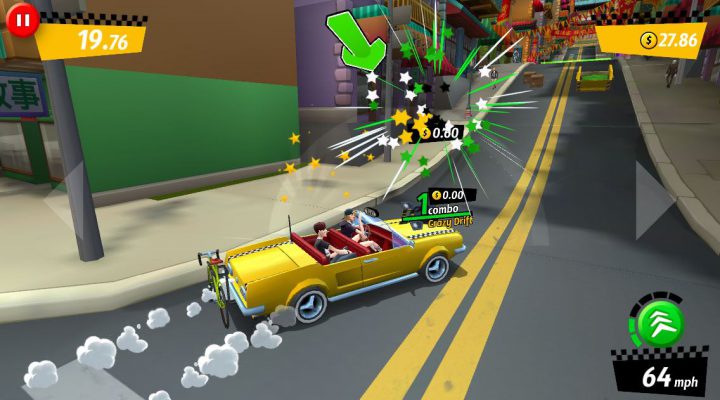 Simplified controls are great for playing in portrait mode.

Retains the same energy and vibe that people love from the series.

Uses a fairly painful energy system to monetize, throwing up a paywall all too frequently.

Due to button placement, right turns often end up as boosts.

When you stop and think about it, few established franchises seem like a better fit for quick bursts of mobile gaming that Crazy Taxi. Even at its birth in the arcades, players would only get a minute or two before that timer ticked down to nothing, forcing many a recreational cabbie into early retirement.

With that in mind, we went into Crazy Taxi: City Rush with a proper mix of excitement and hesitation. Excitement because, yes, on paper, a Crazy Taxi mobile game could be the greatest thing since sliced bread. Hesitant because, well… it’s been tried before.

This quote from our review of the 2012 mobile Crazy Taxi sums up the situation perfectly:

The Crazy Taxi license has so much untapped potential that it’s killing us that SEGA isn’t doing more with it.  This release proves that the Crazy Taxi formula is a fantastic fit for mobile gamers… but SEGA needs to think about putting some new tires on this old cab.

Crazy Taxi: City Rush, it would seem, is the answer to our prayers. Designed from the ground up for mobile, City Rush is a free-to-play game with quick session times, a simplified control scheme, and the same bright/loud/frantic atmosphere that gamers have come to love from the Crazy Taxi brand. 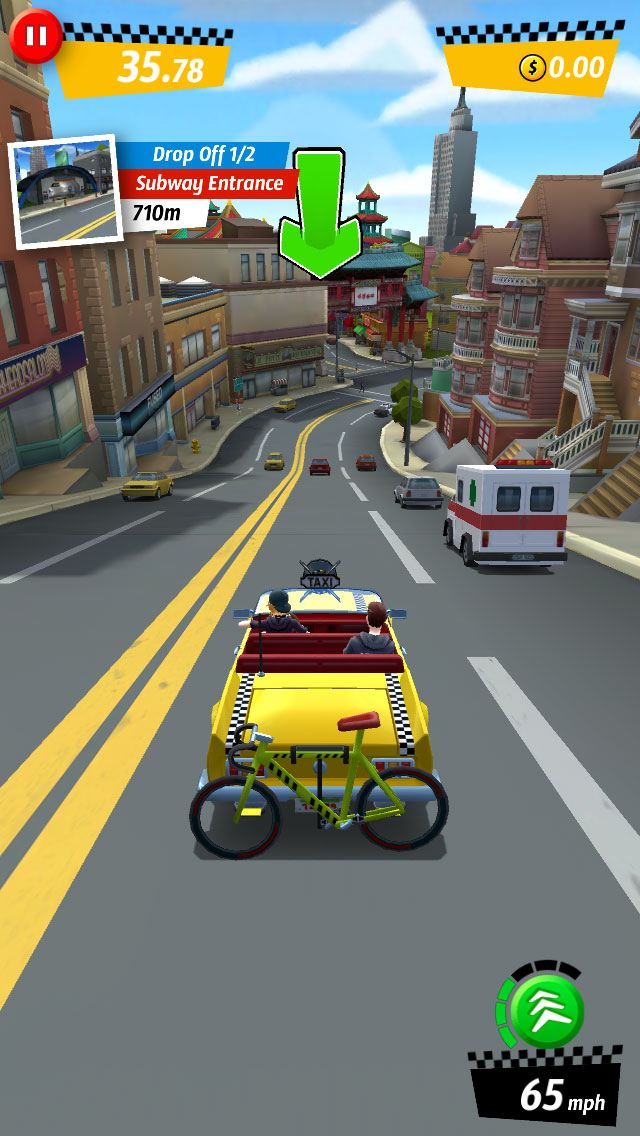 The simplified controls may sound off-putting at first, but in practice they work quite well. Rather than driving with standard gas/brake/steering controls, players will switch between lanes of traffic much like they would in an endless runner (think Subway Surfers). Turning corners requires a pretty over-the-top, tire-squealing  maneuver that requires little more than holding and releasing your thumb, and braking when you arrive requires a rapid mashing in a similar style.

If there’s one complaint to be had, though, it’s with the placement of the “boost” button. Boosting will give you a bunch of speed and — more importantly — let you barrel through cars, but the button for it occupies the bottom right portion of the screen. In my experience, I found that some of my attempts to move my cab to the right lane would end up triggering a boost instead.

You’ll be using these controls in a variety of missions. Most follow the classic Crazy Taxi “drive this person here” formula, but in the first hour alone we were treated to a Daily Challenge (complete as many checkpoints as you can) and a chance to rampage over traffic in a tank. 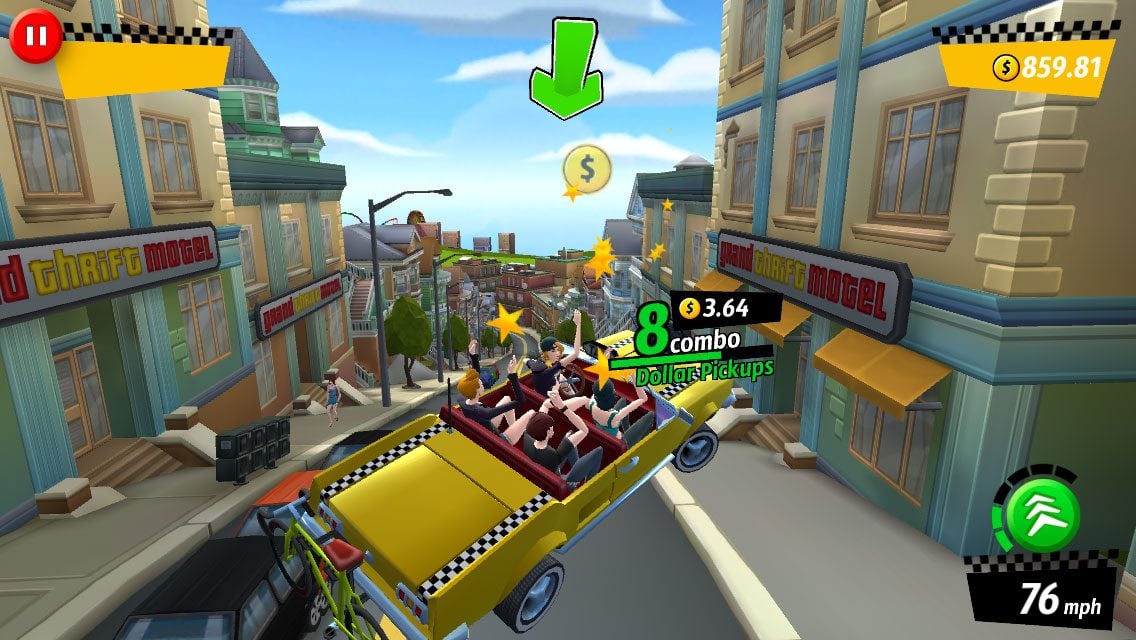 The only real disappointment in terms of variety is that there isn’t an endless mode to enjoy, where players get to race against the clock to earn more time and play as long as their performance would allow. This is something that’s at the very heart of Crazy Taxi, but at the same time, doesn’t really jive with the mission-based design of free-to-play offerings like this.

Though I suppose you could charge players X amount of fuel to play an endless session. The effect on SEGA’s bottom line would be negligible, I’d think. 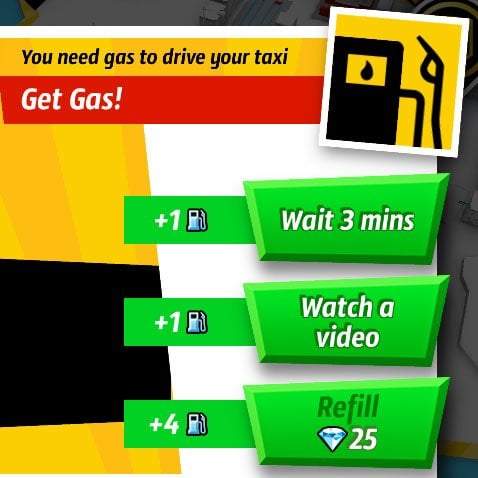 Which brings us to the game’s one real sticking point: you’ll only be able to play for so long before Crazy Taxi: City Rush’s free-to-play business model rears its ugly head.

Rather than abandoning the energy model like so many other freemium gamemakers have in the last year or so, Crazy Taxi gleefully takes it on as a passenger. You’ll have a limited amount of “fuel” to use before running out, at which time you’ll either have to wait for it to recharge or shell out some real money to keep playing.

King, the makers of Candy Crush, brilliantly got around this by only deducting a unit of energy if you don’t successfully complete a stage. If Crazy Taxi: City Rush went this route there’d be no reason to moan. Instead, it deducts a unit of fuel for every mission you undertake.

While frustrating, this is something I can live with and still enjoy the game. Many others, though, will not. Much of the intended audience for Crazy Taxi: City Rush is going to write this off with the same disdain that they did Trials: Frontiers (another free-to-play offering that I derived great enjoyment from, despite its use of the archaic energy model). And it’s a shame, because if you can push beyond that, there’s plenty of fun to be had here. 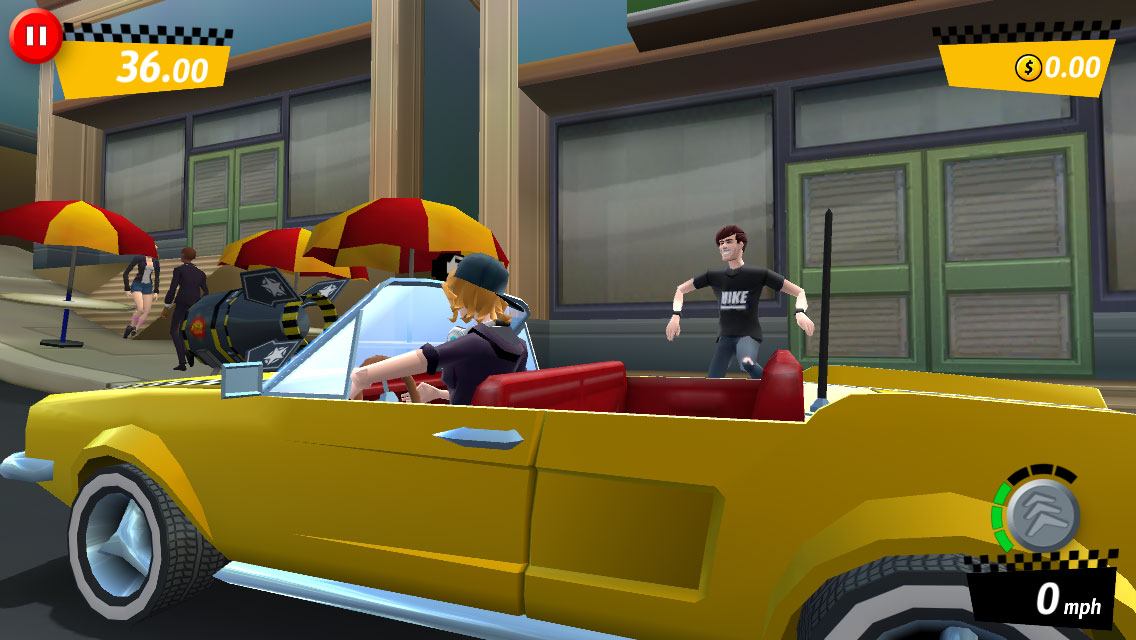 Don’t let it’s business model turn you off. If you’re a fan of the Crazy Taxi franchise, this is a unique spin on something you already know and love that’s well worth giving a chance.

Just buckle up – when you crash into that paywall, it’s going to hurt.