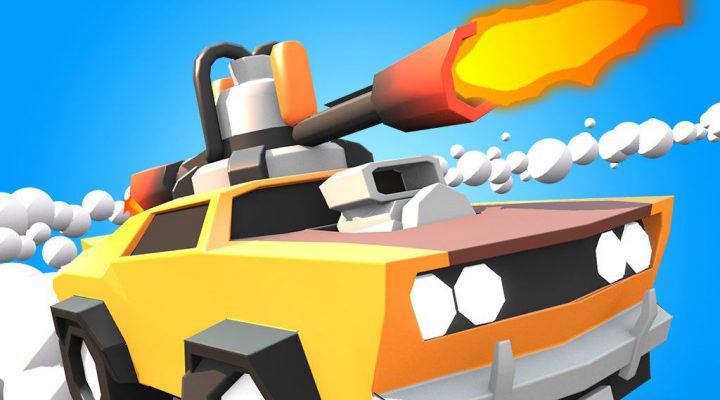 Low-level of coins per crown, much more about the ads.

Crash of Cars might be the first in-house mobile game effort from beloved Aussie games portal Not Doppler, but it certainly doesn’t feel like a rookie effort. In terms of depth, when compared with other multiplayer games, Crash of Cars falls somewhere right in the middle of Clash of Clans (surely the name is no coincidence) and Slither.io.  However, if you’re looking for comparisons, Crash of Cars might be best described as a cross between Slither.io and a stripped back Mario Kart.

The central objective in Crash of Cars is to zoom around one of four maps collecting as many crowns as possible until your vehicle is utterly destroyed. The more crowns you collect, the better your hourly leaderboard ranking and the more coins you’re rewarded with in the end. Unless you’re a Crash of Cars superstar, you’re likely going to get more coins (used to grab additional vehicles from the vending machine) from free gifts and watching videos, so it’s really your ranking that matters most in terms of a reward.

This reward structure is something that’s likely to put off less competitive players who like the idea of winning something more than bragging rights. However, if you’re way off your quarterly sales targets and looking to assert dominance within your office, this is likely the perfect game for you. While Crash of Cars isn’t an amazing, out of this world game, it is one many in your social circles are at least giving a try, like Slither.io last summer. 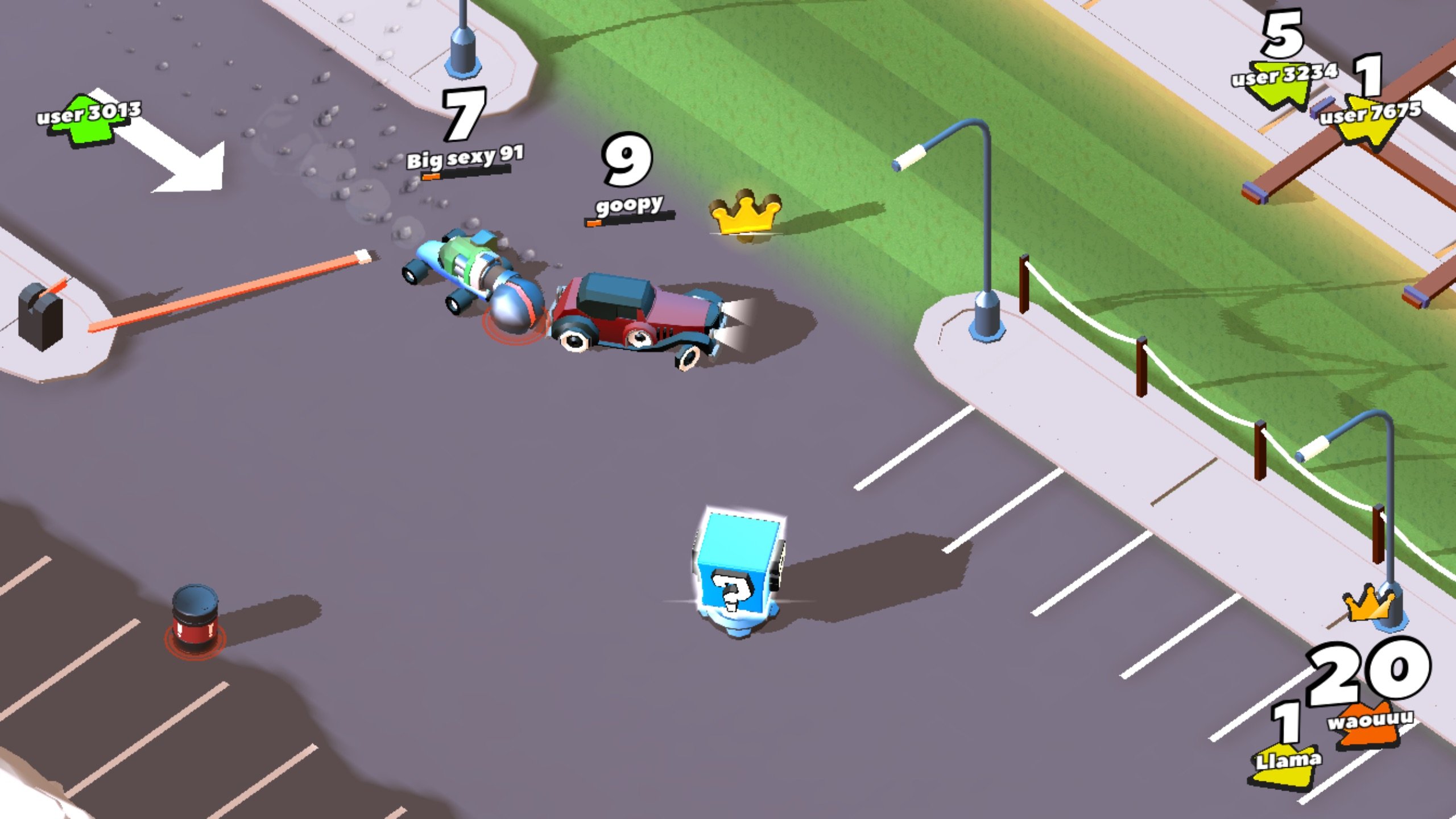 What makes Crash of Cars fun and a worthwhile gaming experience is not the crown capturing goal, but the method for capturing crowns. In this department, it’s quite a lot like Slither.io. There are a few single crowns that’ll be randomly generated within the map, but because they can seem few and far between, the better (and more exciting) plan of action is to knick them off the other players in your map world. How? By destroying their vehicles.

While your vehicle doesn’t grow with the number of crowns you’re holding on to, the number is prominently displayed overhead along with your health. The same is true of all those in the game. This information is useful in helping you plan who to target and who to avoid. A car with buckets of crowns and full health is probably not someone you want to mess with (like a massive snake when you’re middle of the road in Slither.io), however someone with 8-10 crowns and less health than you is a perfect target. Take them out and scoop those crowns up. 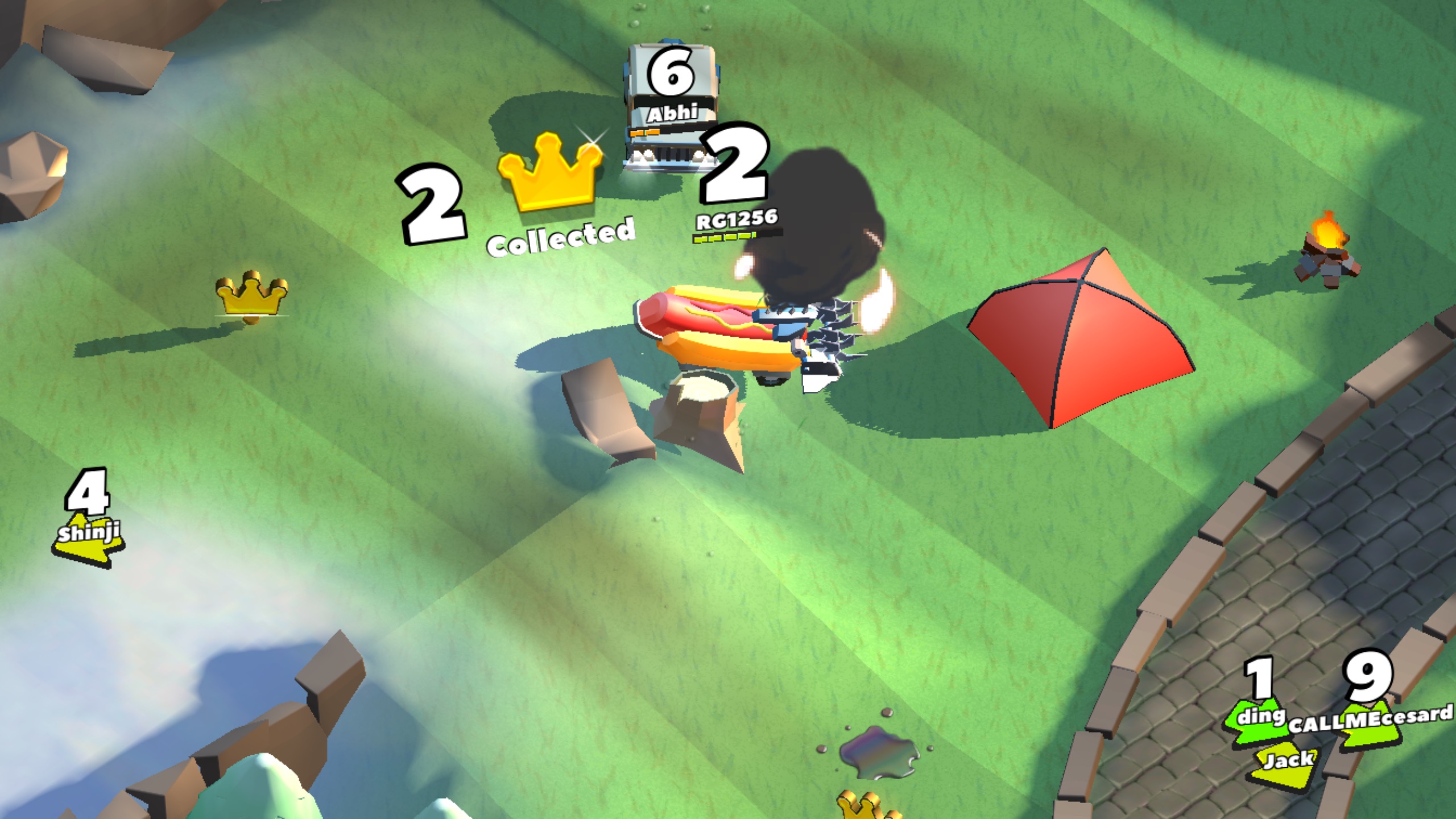 You don’t have to go into battle empty handed and, in fact, doing so is probably a very bad idea. Approach Crash of Cars like a free-for-all and your opponents like bumper cars at a fair ground and your adventure will end as quickly as it began. Instead look out for the Mario Kart style surprise boxes dotted around the map. They’re way more common than crowns and they’ll help you attack, protect yourself or eve restore some health. We’ve got a complete item guide that’ll go into even more detail for you, but spikes, homing missiles and shields will likely become your new best friends. These items add a layer of in-game complexity to Crash of Cars and a ton of fun. 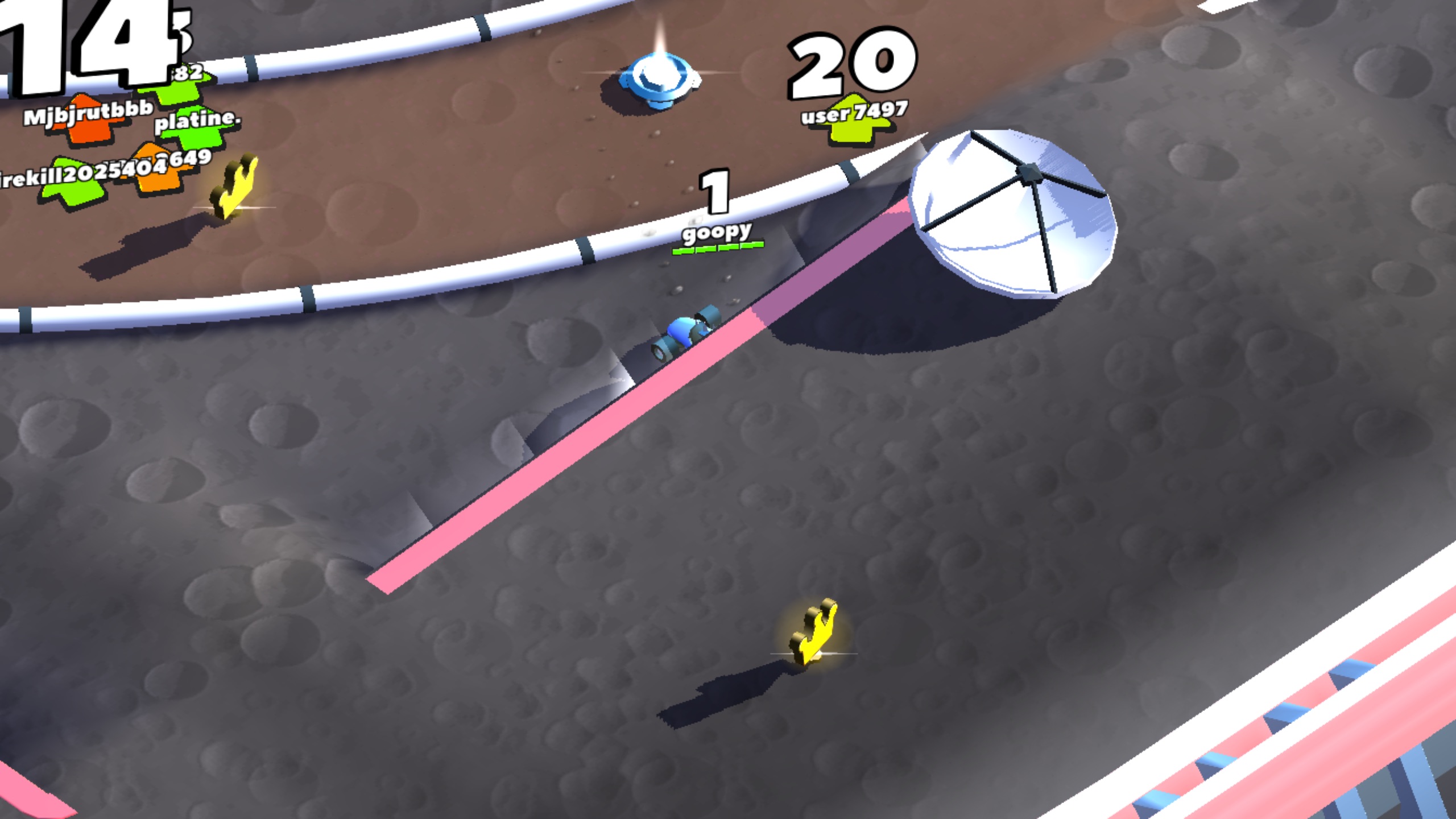 However, whether you quickly fall in or out of love with Crash of Cars will depend as much on your mastery of its driving mechanics as your appreciation for its rewards system. Though it looks good on a larger tablet, unless you’re hankering for a hand cramp, it’s a game better played on smaller devices. The controls are theoretically simple enough – press the left side of the screen to turn left, press the right side of the screen to turn right, tap the item button to activate a displayed item. However, they are extremely sensitive. Unless you’re a frequent top-view car game player, a real natural or willing to spend a bit of time getting used to the sensitivity, this might be a major issue. Part of the mass appear of Slither.io and other casual games is the theoretical and practical simplicity of the controls and Crash of Cars misses the mark a bit here. 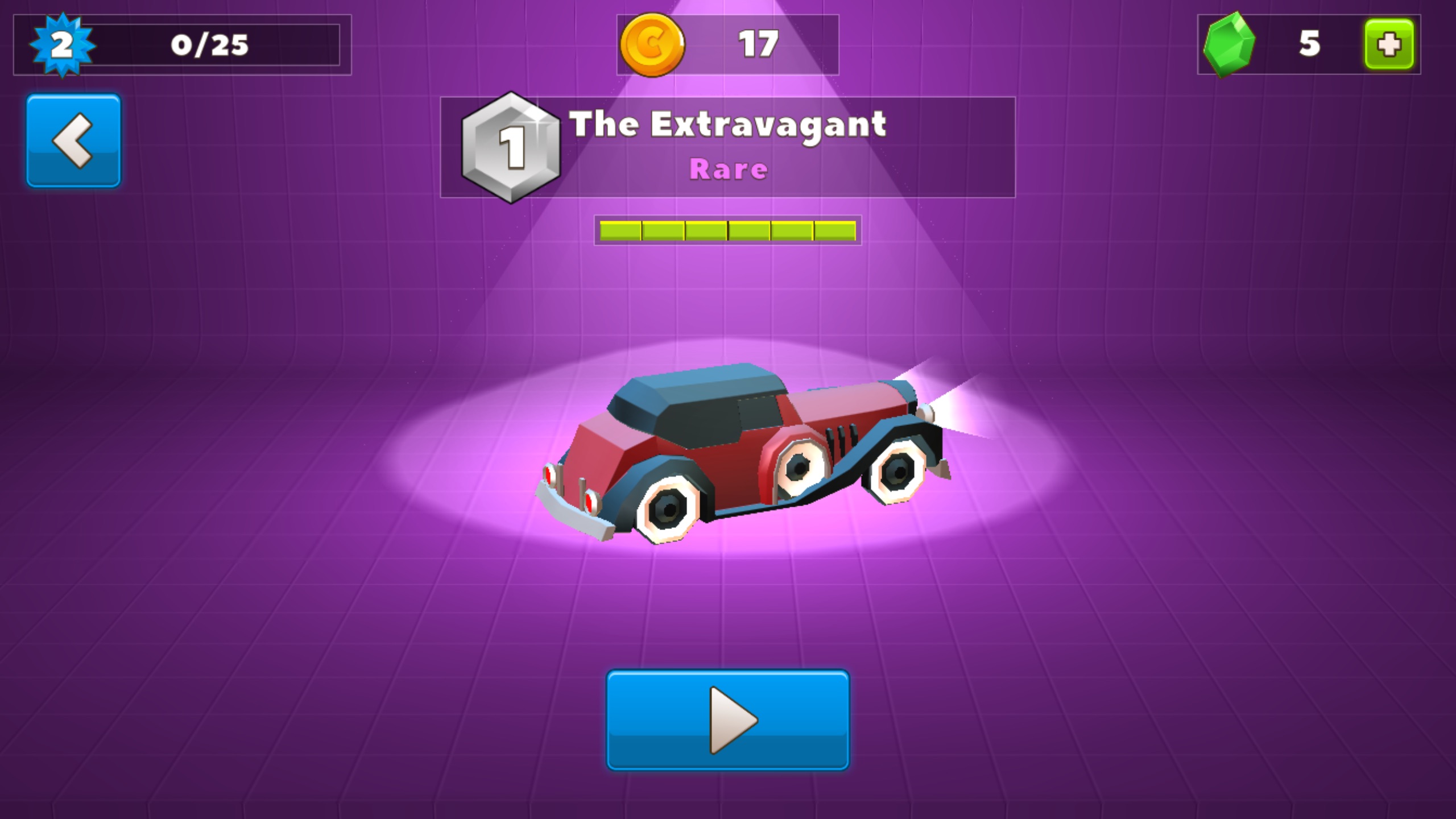 Crash of Cars is an impressively smooth running game. Given that there’s a lot of people playing, that it doesn’t suffer from any noticeable lag is rather noteworthy. The game’s 3D graphics are strong and definitely lean more towards Clash of Clans than Slither. The choice of vehicles is pretty impressive – who doesn’t want to dash around in a rather hardy limo shooting cannons all over the place? The music isn’t remarkable, but it isn’t bad. You won’t have to play Crash of Cars on mute, but the music itself isn’t a huge attraction.

Overall, Crash of Cars isn’t quite a candidate for game of the year, but it’s something most players will likely have at least a week or two of solid fun before it moves off the home screen into the games folder. For a lot of folks, the biggest attraction to Crash of Cars will likely be the social aspect of the game — competing against strangers and friends. The more popular Crash of Cars gets and can stay, the more likely these players will be to stick around, but it’ll depend on whether new vehicles and features are introduced often enough to sustain interest.