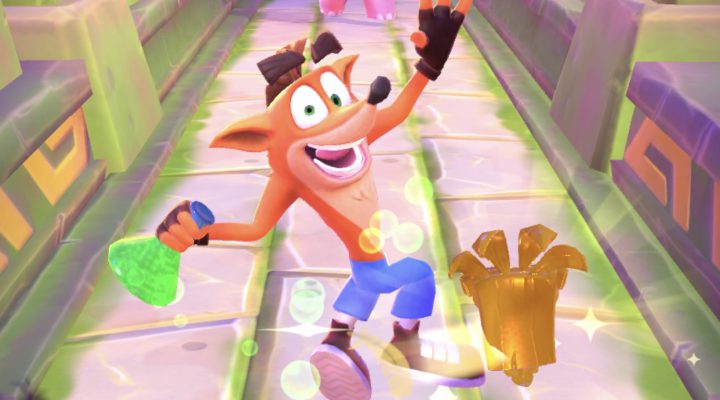 At its heart, it's just another auto-runner

Doesn't do much to stand out

Auto-runners have always looked to the original Crash Bandicoot games for inspiration, so it shouldn’t come as too much of a surprise that things have come full circle – Crash Bandicoot: On The Run (download from the App Store or Play Store) is pretty much your prototypical lane-based leg-it fest.

You’re controlling Crash, who’s running down a three-lane level. You can swipe left and right to switch lanes, up or down to jump or slide, and tap the screen to perform the orange critter’s spinning move. There are crates to smash, apple-like fruits to collect and bosses to take down.

Everything is put together with the sort of slickness you’d expect. The controls never let you down, the graphics capture the primary colored jungle silliness perfectly and anyone with a history with Crash will feel a nostalgic tingle when they take a look.

The game itself is pretty solid. You’re taking down bosses, collecting materials to make bombs and rebuilding a battered settlement. It’s all pretty standard fare, but it’s wrapped around the requisite level of zaniness to keep you interested.

There are a couple of twists – namely in those bosses. At the end of levels you need to take down a big foe, dodging its attacks and getting close before hurling a potion or a bomb at it. You need to grab the ingredients for those weapons in endless sections that exist apart from the main story.

There’s a decent pace to proceedings here, and you’re going to need to be pretty quick with your fingers if you want to succeed. And you probably will want to succeed – Crash Bandicoot: On The Run presents a perfectly pleasant way to waste a few minutes, or a few hours if you lock in.

The fact of the matter is, Crash Bandicoot: On The Run would be as good a game with another veneer applied. It would still be fast and fun and you’d still enjoy the tapping and swiping until you eventually started craving something deeper.

The nostalgic trappings of the experience are a ploy, and one that works pretty darn well. The game bears the hallmarks of nostalgia, of a glimpse into a rose-tinted past, but unabashedly uses them to drag the player into a more mundane and general present.