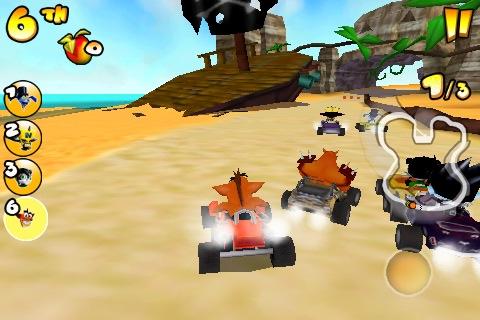 Crash Bandicoot Nitro Kart 3D might have been an early release on the App Store, but that never stopped it from being one of the best. Now nearly two years later, the series has returned with new maps, better visuals, and online multiplayer. Put on your seatbelts, kids – kart racing on the iPhone has never been this much fun!

A portable continuation of the popular Crash Nitro Kart series for home console series, Crash Bandicoot Nitro Kart 2 is a kart racing game that easily rivals the best of the best. Players will select their character from a variety of faces from the Crash Bandicoot series and race their way through 12 different (and increasingly challenging) tracks in an effort to bring home the gold.

Like many racing games on the iPhone steering is handled entirely through tilt. Players have no control over acceleration but can hit the brakes by touching the bottom of the screen, and can make their carts jump by touching the top. Despite this reviewer’s personal dislike of tilt steering in iPhone racers, Crash Nitro Kart 2‘s controls felt like a really good fit for the cartoony series and felt instantly comfortable despite my initial hesitation.

While the controls are competent, track design is where Crash Nitro Kart 2 really excels. The game offers a gentle progression of difficulty as you work through all 12 tracks, offering simple yet smart designs early on and offering more challenging twists and turns the further in you go. The presentation really shines here too, as each of the tracks feels unique and alive. Each track has a different theme – haunted house, bayou, snow, beach, etc – complete with unique visuals and catchy, hummable music. In fact, I’m humming the theme from the bayou level as I type this.

As good as the game is, though, it isn’t without its flaws. Mixed in amongst the exceptional track design is the occasional obstacle that will completely derail your race. On the haunted house track, for example, there’s a doorway that you can get wedged behind if you lose control and miss the opening. Since the game lacks any type of a reverse control, there’s no way to quickly back out and rejoin the battle. You can spend 10 or so seconds trying to turn yourself out of the situation, but by the time your free there’s simply no way you’ll be able to catch up.

The same can be said of any situation where you fall of the track and need to be phased back into the race. You can hold an impressive lead for 2 laps, accidentally drive off a bridge, and by the time you’re placed back in the race find yourself in a distant last. While not every return from death penalty ends up being this extreme, it always feels like you’re being penalized too harshly – especially in light of the fact that the excellent track design means that even the best of players will encounter an obstacle or two that will cause them to veer off the tracks.

These may sound like major issues, but honestly, we’re nitpicking. With how infrequently these problems crop up, it does very little to mar the overall experience. In fact, these were our only real disappointments about the entire package. Considering what a mixed bag so many other iPhone racers offer, we’re delighted that these little issues were the only problems we could find. 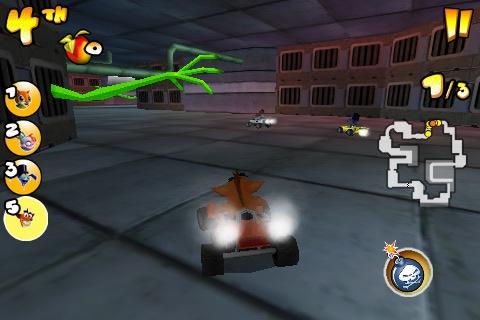 Where the game doesn’t disappoint, however, is in its multiplayer. Online competition is the biggest improvement that Crash Nitro Kart 2 has made to the series, and it executes it perfectly. In the dozens of races we’ve enjoyed over the past few days we haven’t suffered any lag or difficulty in finding opponents. The matchmaking system could use a little tweaking, as we would sometimes be added to a room where other players were already racing (thereby forcing us to wait), but it was never so big a problem that we couldn’t just back out and join another room in search of ready-to-go competition.

If cup racing and multiplayer experiences don’t sound like enough to justify the $9.99 price tag, these are only two of the included 8 modes. Time attack, eliminator, missions – everything you could ever expect from a packed-to-the-rafters racer is here. This game is simply too big for one review to do it justice. And we haven’t even begun to talk about the fantastic assortment of combat items you can pick up, the silly animations that each driver displays… the list of great stuff just goes on and on.

Having played more than my share of kart racers over the years, I can say that it’s incredibly difficult for any series to hold a candle to what Nintendo has had to offer with its Mario Kart franchise. Many players consider the portable Mario Kart DS to be the pinnacle of that series. And while some might be quick to call what I’m about to say sacrilege, it doesn’t make it any less true. Crash Bandicoot Nitro Kart 2 offers almost as much fun as its DS competition, and is just as much a must-buy for the iPhone as Mario Kart is for the DS.