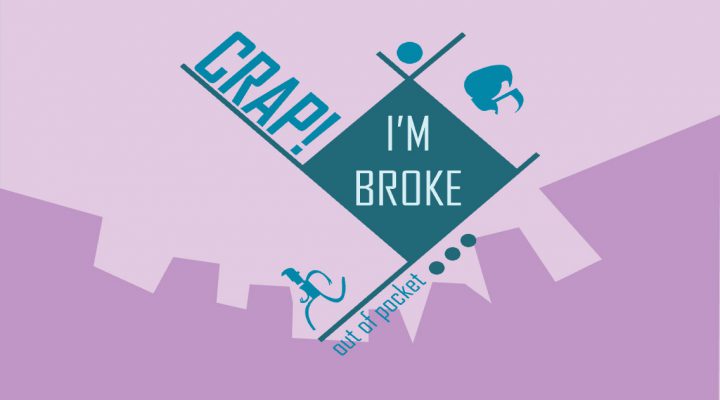 Unique and charming Cubist style with bits of humor and endearing details throughout.

The mini-games are diverse and quite fun to play before they eventually become tiresome.

The small number of mini-games and need to play them repeatedly every month creates an endless and tiring grind.

After you've unlocked all seven mini-games, nothing new happens: it's just the same thing over and over.

No real victory condition, or achievements, or even tangible rewards for your endless efforts.

Crap! I’m Broke: Out of Pocket is a stylish collection of mini-games wrapped in a simplified life sim package. It has a number of good ideas that initially come together into an engaging diversion, but the ultimate result is too shallow and grindy once your foot’s in the door.

Your character in Crap! I’m Broke has recently moved out on his own and has to begin paying bills for the first time in his young adult life. Upon realizing that a zero-balance bank account won’t cut it when his monthly payments come due, he sets out in search of any part-time work he can nab. The first job he comes across is washing dishes at the diner next to his apartment, but as the game progresses, you’ll gain access to a cluster of employment opportunities ranging from flipping burgers to bartending. 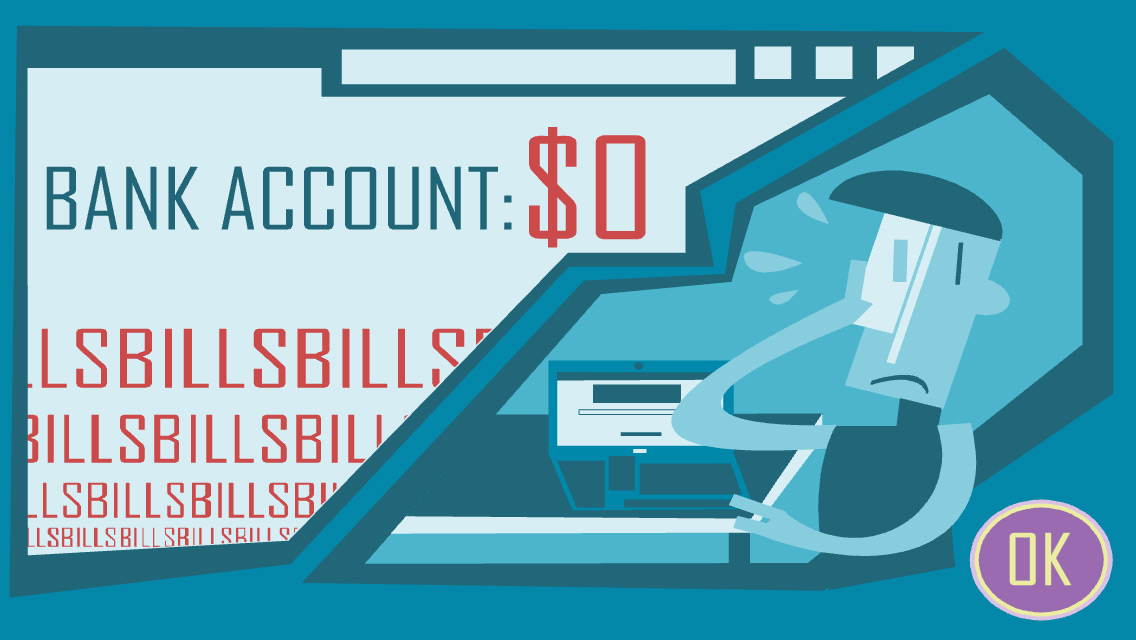 These jobs are the meat of the gameplay and are presented as timed mini-games with different rules and goals. Washing dishes requires you to scrub gunk off plates by manically rubbing your finger across your device. Bartending sees patrons giving drink orders in the form of three symbols (“□△○!”) that you must copy by tapping on their matching liquor bottles. Each instance of a job mini-game has a maximum time of 30 seconds, but if you make a mistake while playing you will lose seconds and be booted to the curb sooner. You can also quit a job at any time without penalty, so if you start flipping burgers but need to get home before your 30-second shift is over you are always free to leave.

That freedom to come and go is useful since you have two other timers always running: your hunger and bills meters. Both will decrease automatically over time, but hunger can be replenished by returning home and grabbing a bite from your fridge. The bills meter, on the other hand, will continue counting down until you pay off your bills for the month. You have three minutes every month before your bills are “due,” and it’s within those three minutes that you must make the most of your part-time jobs by earning as much as possible. 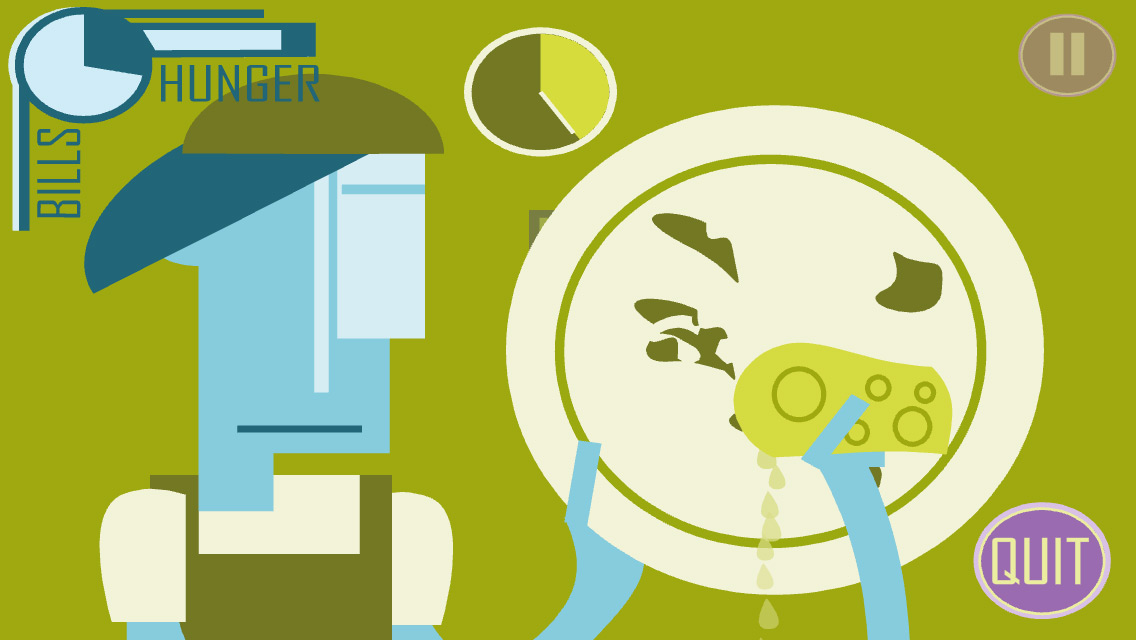 While the game essentially boils down to playing mini-games to make enough money to pay your bills every month, there are some other details that make Crap! I’m Broke an interesting balancing act of time, income, and debts. For starters, not every job is available at the beginning of the game, and you must survive a number of months before you can take part in every opportunity. Some jobs—bartending and being a bouncer—are only available by buying certain items on the webshop that appears at the beginning of each month, but you can only buy one item per month and these purchases often drastically cut into your ever-dwindling savings.

From a strictly gameplay perspective, we’d actually compare it to Cart Life. The mini-games and ever-looming bills create a cyclical progression where you may get ahead one month, but will never feel completely free to skirt work. But Crap! I’m Broke does not attempt to instill the same emotional and physical exhaustion of Cart Life: the different jobs’ mini-games themselves are still fun to play, and most of the purchasable items serve a definitive gameplay purpose, such as improving your walking speed, versus Cart Life’s emotional “luxury” goods like towels. The two games are aiming for entirely different goals, but the paths they take are similar. 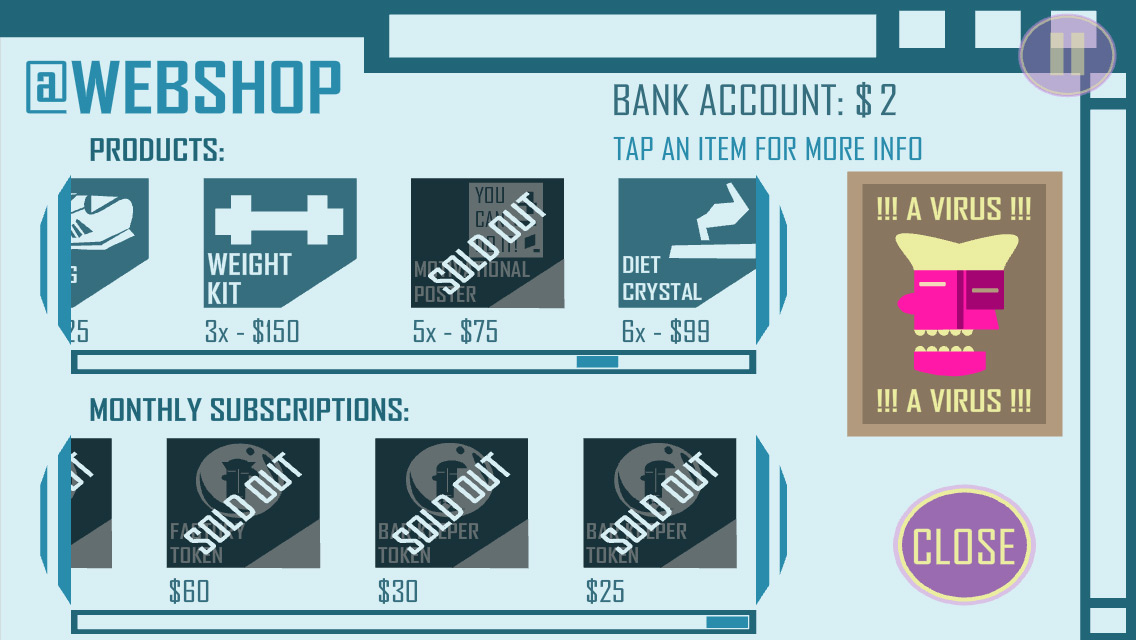 Crap! I’m Broke’s jobs themselves must be accessed by leaving your apartment and running to them. Jobs that are closer to home—dishwashing at the diner, patty-flipping at the Burger Palace—pay the lowest, netting you miniscule amounts like $3 per dish washed or $1 per burger made. Traveling farther out will earn you more money—the bouncer nets $15 per patron admitted or turned away—but will take longer to get to, cutting into your available time to work before you must head home and pay off your bills. And, since you can only work when a blue hiring sign is in a workplace’s window, there’s no guarantee you won’t run halfway across town only to find the club is not hiring at the moment.

At first, this creates a delicate tension between risking the travel time or just staying close to home and taking the first job you see. But Crap! I’m Broke has a decidedly “best way” to play, and once you figure out the right routine, you will never need to weigh your options or worry about money again. You should always take the higher-paying job (anything except the diner or Burger Palace), and if a higher-paying job is not available, you should take a lower-paying job and quit immediately to “refresh” the available gigs. This ensures you don’t waste time on what are essentially unlivable wages and can get to the real moneymakers quicker. 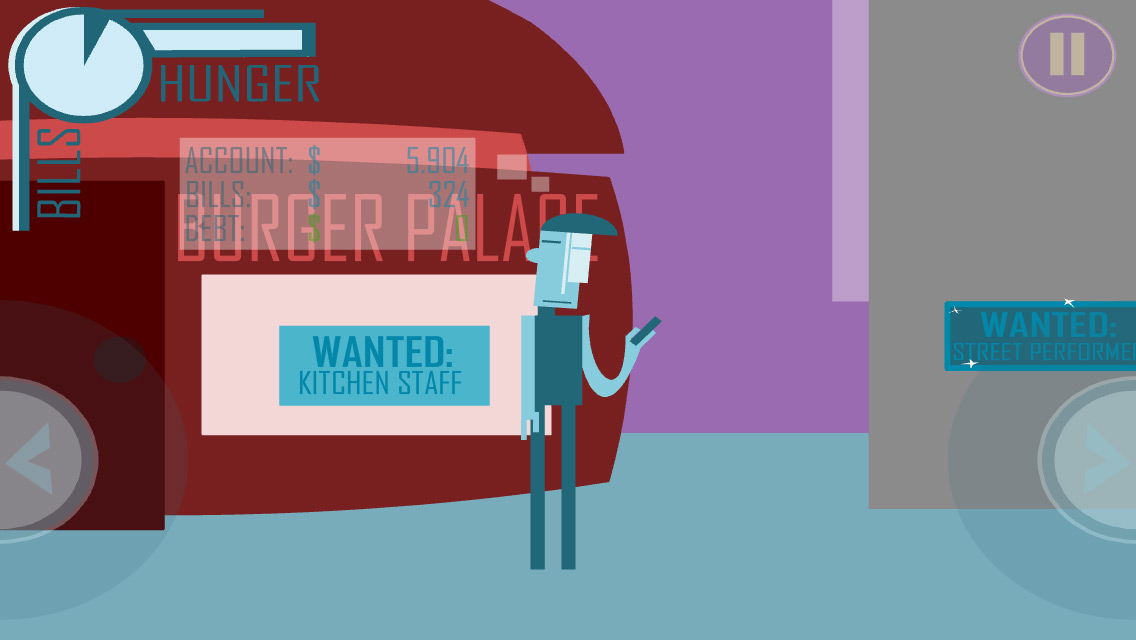 The problem is, whether you game the system by only taking high-paying jobs or suffer through endless dirty dishes and constant debt, Crap! I’m Broke ends up falling into a strict, repetitive grind with no end in sight. Your “goal” for each year is to save up enough extra money to achieve a New Year’s resolution, such as flying home to see your family or going on a camping trip. Your resolution must be selected at the beginning of the year and has a specific price tag tied to it: flying home to see your parents costs only $500 while the camping trip is a whopping $2,500.

There are six resolutions to choose from at the start of each year with increasing costs (and thus, difficulty), and having the right amount of money saved once January rolls around will reward you with some photos of your happy vacation (or actually nothing, since that portion of the game is currently bugged and has given us no photos after three successful New Year’s resolutions). But this same cycle repeats every year and besides the brief sense of accomplishment meeting that goal imparts, there is no real victory condition. You’ll just start the next year, with a new goal, and playing the same mini-games until your fingers cramp. 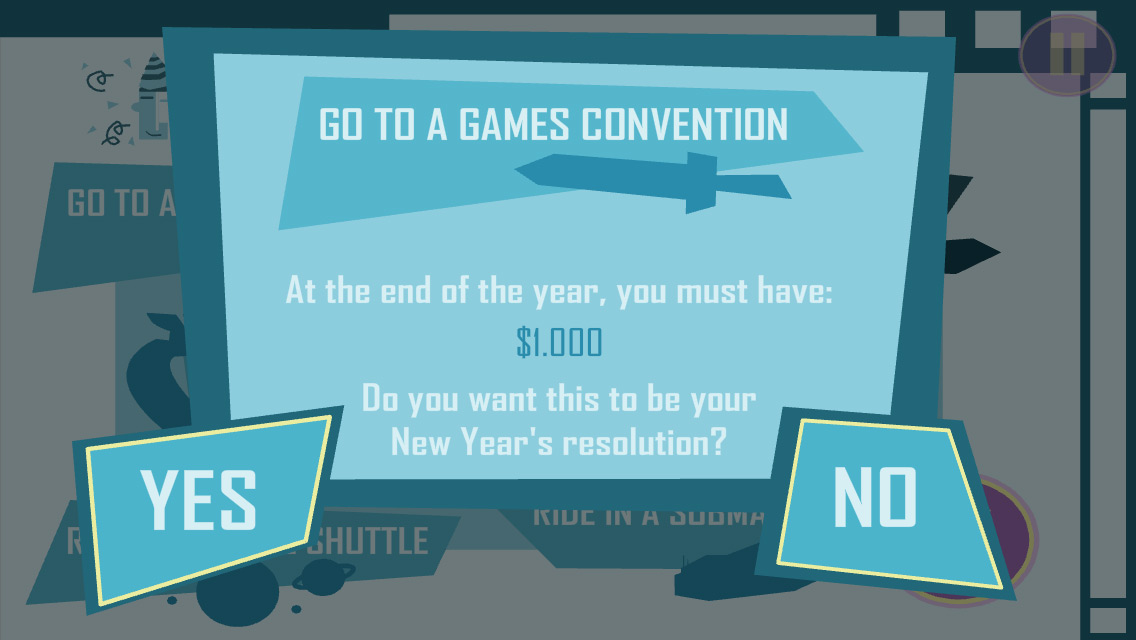 If there were new games each year or a wider variety of choices in work, this could potentially be a fun yearly ritual. But once you’ve unlocked all of the jobs—seven in total—those are all you’ll have to pick from. And since the two lowest-paying jobs and farthest away job—the carnival, at the very end of the map—aren’t really viable options if you want to make enough money before your monthly three minutes are up, you really only have four jobs to take on each year.

We mentioned these mini-games are fun—and they are—but they aren’t complex or varied enough to stay fun for long. Remember, the dish-washing game is just rubbing your screen over and over. By the end of our first year of repetitive mini-work we were ready to quit. We pushed on in the hope that something new would happen, but now that we’re securely into Year 5 we can safely say: nothing happens. It’s possible you’ll get some small reward for achieving every New Year’s resolution, but we just can’t force ourselves to repeat the same four tasks any more. 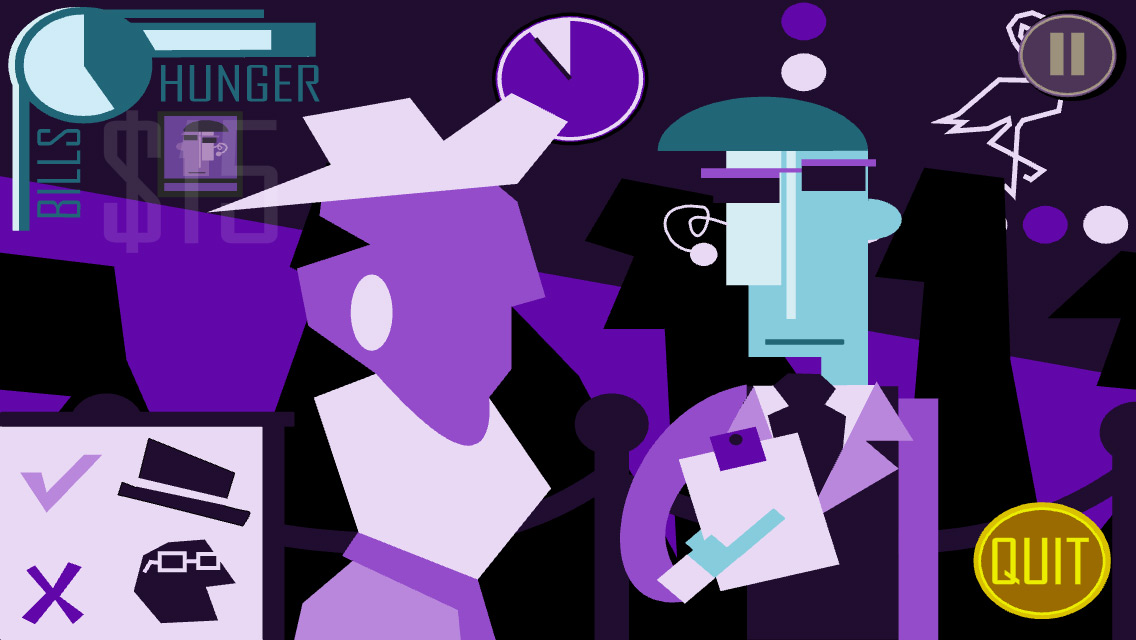 Which is a shame, because Crap! I’m Broke is full of wonderful little touches in other areas that hint at what could have been a great game. The aesthetic is a beautiful Cubist style punctuated by monochrome areas, like the all-blue apartment or green-and-dark-green factory. There are charming details throughout, like a ghostly grim reaper who begins to follow you as you get hungry, playful jazz riffs that warn you of impending time limits, or your character’s photo adorning any job where he’s earned “Employee of the Month” status (or photos if you’ve earned the title more than once).

Those Employee of the Month versions of mini-games provide a nice challenge mode and way to earn some extra cash. And the pre-Atari-style microgames you can earn by paying off bills with time to spare are a fun collectible, if too simple to play more than once. Unfortunately, this is true for the main game as well: what starts off endearing is too simple and repetitive to play more than once, but the entire experience is exactly that—playing the same few games, the same way, over and over and over.

UPDATE: Since the publication of this review, developer Arcane Circus has fixed the bug that prevented New Years’ memories from showing up in the photo album. This also allows the game to have a more definite “ending” than it did at the time of our playthrough. The developer seems dedicated to addressing issues and updating Crap! I’m Broke, and we look forward to seeing how the game continues to advance in the future.