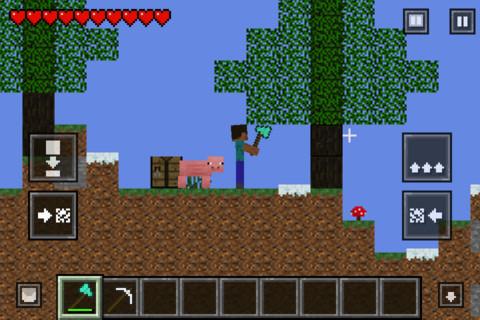 An enigmatic developer by the name of “domp” recently released a game on iOS called Crafted. It is probably a good thing it’s a mysterious company though, as the new app is Minecraft in 2D. No, that isn’t to say that the game is “like” Minecraft. It is to say that it is Minecraft, or at least a blatant copy of it. Like the original, the title is more of a toy than a game, offering players a procedurally generated world in which to build whatever it is that they can imagine.

For those that haven’t played Minecraft, or may have never heard of it, the game is a randomly generated world in which players can explore and dig through the earth in search of crafting materials. These consist of rocks, ores, wood, and other various essentials. As it is uncovered and collected, it is added to one’s inventory and can then be combined to create armor, decorative elements, building blocks, and so on. Once the basics are understood, it is possible for players to build virtually anything they can imagine. Thus it is the exact same in Crafted.

Players move through the 2D (instead of 3D) world with awkward movement controls, pressing virtual buttons to break blocks, jump, crouch, and so on. To move and look, swipes on the left or right side of the iDevice are used, but the placement of the virtual buttons feels backwards. For example, to move, the left side of the screen is used, while the breaking blocks button is also on the left.

Crafted also gives little to no direction when players are starting out other than the controls, the premise of the game, and a crafting book that has no context. To a Minecraft veteran, this isn’t going to be a big deal, but new users are going to be completely lost.

Initially the whole idea is to simply survive. During the day, players do whatever they wish and must attempt to have some semblance of shelter or defense before nightfall when enemies begin coming out of the woodwork. As there are no real instructions, night arrives well before a new user will figure out what they are doing, and when they inevitably die, they respawn with none of the inventory they previously had. To make matters worse, when night falls, it is impossible to see anything without a torch (which players will unlikely be able to make before the first nightfall), and be unable to play… as they cannot see a freaking thing.

The game is a hard learn, but it is doable. What is most obnoxious though is that the game never tells players how to actually craft anything. It gives them a veritable cookbook of what can make what (e.g. gold armor, torches, etc.), but not actually how to make it. Players actually have to place the right combination of materials into a grid space, in the upper right of the crafting menu, to make something automatically. 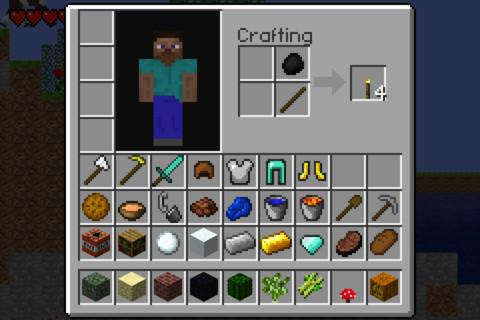 The plus of Crafted is that it is addictive to explore and build. Challenges are derived by the user, and the deeper they dig, the better the materials they will discover. Oh wait! That’s the plus of Minecraft, which Crafted shamelessly copies. Even the art style is identical to the PC predecessor, and as a paid app, this is likely a move to make a quick profit before the official iOS version of Minecraft is released. The only significant difference is that the application is two-dimensional, thus offering players a new perspective on an existing game.

In the end, Crafted is a title that is only really going to be enjoyable by current Minecraft players. It can be enjoyed by new users too, but the learning curve is quite steep and will initially frustrate a good many. Nevertheless, the title almost completely rips-off the older game without even the courtesy of trying to be the least bit different (other than the 2D perspective) in terms of game play and visual style. For that reason alone, Crafted is a game that, by moral imperative, should be passed on.