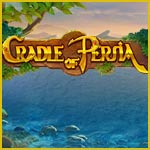 If you’ve got an interest in Middle Eastern history, be sure to check out Cradle of Persia. More than just another match-three puzzler, it’s also an addictive trip backwards in time through the evolution of one of mankind’s oldest and most storied civilizations.

Mind you, at face value, things look much the same as they do in a typical pattern-making brainteaser. Each stage simply consists of a grid of titles situated atop an appropriately exotic background image and bearing icons of flowers, coins, logs and other objects. Dragging your mouse over groups of three or more similarly-stamped adjacent pieces (matches can be made vertically, horizontally or in any combination thereof, so long as they’re linear) causes them to disappear from the board.

Your goal is, of course, to remove all squares bearing marbled coloring from each playfield before a timer runs out and robs you of a limited supply of lives. (A challenge made more difficult as the adventure progresses by the presence of tile-sealing chains, boxes, walls and other obstacles which must be removed.) However, there’s much more to the quest than that, as you’ll be pleased to discover after spending hours trying to make headway in the lone featured play mode, a solo campaign-style affair.

Essentially, over the course of the tale, you’ll attempt to advance your civilization through several different historical epochs, ranging from age of the Achaemenid Empire to periods of Turkish and Mongol Rule. Doing so requires that you construct certain buildings – such as wharves, harems, farms, bathhouses, cities and gardens – between levels by purchasing them with resources gained during hands-on play. You see, each tile used in a match represents one type of resource (food, gold or supplies), or helps build meters granting access to special power-ups, with inventory-boosting benefits gained once such groupings are made. The upshot being that you won’t just be racing the clock, as specified above, but must also take extra pains at every turn to stockpile the resources you’ll need to advance through the underlying adventure.

As in predecessor Cradle of Rome, such strategic trade-offs are constant, adding welcome layers of the depth to the proceedings. For example, you might have to ask yourself at one point if it’s worth replenishing your supply of dynamite at the expense of having to waste extra time attempting to complete the stage. At another, the dilemma could be whether you should try to match ten of an item in one fell swoop or not, potentially being rewarded with a citizen or cow that offers up extra resources with every passing level. The potential sacrifice if you do so? Having to burn a chance to remove that one remotely-situated tile that’s caused so much annoyance already, or making it impossible to grab that equally-tempting combo that would’ve awarded more of another resource you’re routinely short on.

Of course, adding buildings to your collection affords access to new and better resources entirely, such as cups of milk or apples that grant more food than the fish-shaped units one starts out with. And, wouldn’t you know, the more time you take to collect lightning bolts or magic wands that randomly destroy certain squares or turn them into wildcard-style treasures, the more effective special abilities become. (Each power-up sports several tangibly stronger degrees of power.)

As a result, you’ve got to think ahead on several levels before making each move, whether deciding how to best manipulate on-screen objects in your favor or merely proceed faster through the core storyline overall. Complete epochs, and you’ll additionally gain ranks that let you play bonus stages to bolster your supply of power-ups by collecting as many hourglasses or clovers as possible in a set number of moves, or boost resources via slot machine-type gambling sequences.

In short, there’s plenty to love between such staggeringly deep, mind-bending action; a snappy soundtrack that remixes traditional Arabic tunes with fast-paced beats; and universally-attractive depictions of palm trees and minarets. The only downside is that the game can take quite some time to play through (not everyone will have the patience for it) and is tailored to more marathon sessions than bite-sized sittings.

Then again, for all the title simply takes a proven concept and applies it to a different setting, and won’t captivate twitch-happy enthusiasts, we’re far from disappointed. Suffice it to say that Cradle of Persia will leave more dedicated players hooked for one thousand and one nights, and possibly then some.