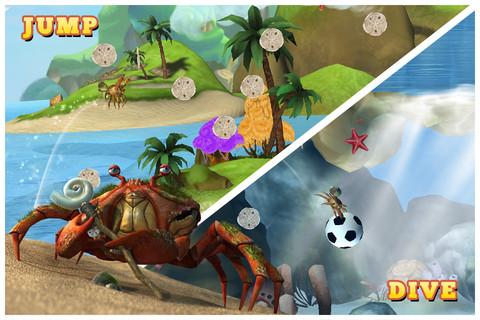 The best commercial you’ll ever play

Typically, when you hear the term “advertisement game”, it isn’t usually an indicator associated with a great product. The last time I decided to abandon this line of thinking, I was left disappointed by Hunger Games: Girl on Fire. So, when I started hearing buzz that Coca-Cola’s free new iOS game, Crabs and Penguins, might actually be good, I rolled my eyes. It looks like I’ve misjudged an advertisement game once again.

The premise of Crabs and Penguins (unsurprisingly) reads just like a Coca-Cola Super Bowl ad: Cute CG animals help each other out in a heartwarming adventure, before finally celebrating over an ice cold Coke. This time, it’s back to the Antarctic, where crabs watch penguins play soccer. When the penguins lose their ball across the sea, it’s up to a single brave crab to bring it back.

The first mode, which takes up a majority of your trip, involves jumping and diving while rolling a soccer ball over the sea. Whether you’re hundreds of feet in the air (or below the sea), the ball will always move at the same speed you do, leaving you free to explore the area in pursuit of coins. Sand dollars are your standard equivalent of the little dots in Pac-Man, while red sand stars, pears, and Coca-Cola caps award additional multipliers.

At its basest level, things feel like your average runner, but play for a few minutes and you’ll realize how much depth and beauty went into the game’s level design. This isn’t a title where your main goal is to collect all the coins; instead, you’ll have to explore each path and try and discover all the hidden areas.

Some of the best dynamic moments included riding secret whirlpools high into the air, dodging sharks, and diving below a collapsing rock formation shaped like a dragon’s open mouth. The fantastic orchestrated score only helps make everything feel much more exciting and engrossing than an advertisement game should ever be.

The second section runs via gyroscope, and feels like the equivalent of Temple Run meeting the bonus stages from Sonic the Hedgehog 2. By tilting your device to the right or left, you’ll weave through a crowded funnel of water, picking up currency all the same. Admittedly, it isn’t as gorgeous or surprising as the “2.5D” sidescrolling segments, but it’s still plenty of fun.

Speaking of gorgeous, Crabs and Penguin is fully rendered in 3D, and requires an iPad 2 or 3 to run at any kind of reasonable speed. Graphically, it’s leaps and bounds over the usual 3D iOS title, but it’s still hard not to wish for just a little more. It’s easy to pick a few pixels out here or there, but it’s nowhere near blocky, either. A slightly higher resolution version, especially for the new iPad’s gorgeous retina display, would be much appreciated. 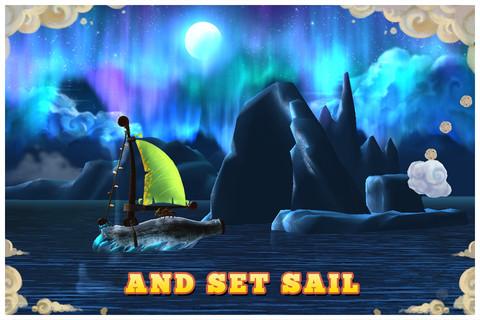 The only other thing I can pick at Crabs and Penguins for is length. It’s six stages in total, and will only take half an hour of your time to play through each level once. There’s definitely merit in searching each stage multiple times to find each hidden path (the 3-star scoring system requires near-perfect runs to achieve the best awards), Crabs and Penguins leaves you wanting more.

I don’t think I’ve ever said that about a free advertisement before, but Crabs and Penguins is an anomaly to the formula. It’s ambitious, engaging, challenging to master, and best of all, one hundred percent free. All at the cost of having to catch a few painless subliminal Coca-Cola and McDonald’s advertisements along the way.

Aside from my strangely coincidental craving for a Big Mac meal with a tall cup of Coke, I’d say it’s well worth the price of free. I’m lovin’ it. Open happiness.