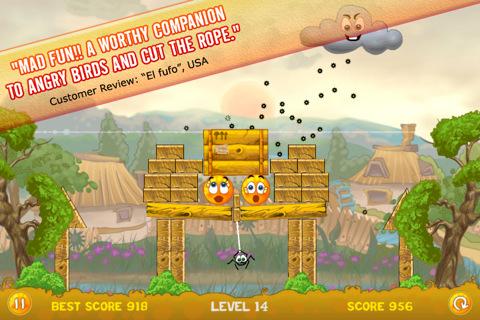 Cover Orange features challenging, inventive, and just plain fun gameplay that will test even the best of players.

Game titles don’t come much more literal than Cover Orange, a game that’s about covering oranges that don’t much like being stuck out in the rain. It’s a simple and goofy concept, but it works well thanks to some challenging physics based puzzle gameplay. There are a lot of iPhone puzzle games out there, but even still, Cover Orange is definitely worth your time.

For some reason, the titular fruits in Cover Orange can’t stand rain. In fact, if a drop of rain so much as touches one of them, they turn black and fade away. So it’s up to you to keep them safe. To do that you’ll need to drop items from the sky to build structures that will keep them covered up. Each stage is set-up differently, with different environmental features to deal with and items to drop. You’ll have boxes, barrels, wheels, and more to drop from the sky, which let you push, block, and cover the poor little oranges.

Sometimes it’s as simple as building a structure around an orange, or using your items to push them towards safety. But it soon gets much more complex. There are swinging chains, instant fail drops, and explosive bombs that can set off chain reactions. And if just one single drop makes its way through you’ll need to start over. You have as much time as you want to drop your objects, but as soon as you drop the last one a rain cloud will come slowly floating in, spitting our black drops of orange killing rain.

There are well over a hundred levels to play through spanning six different worlds, so there’s quite a bit of content in the game. The majority of the levels are pretty challenging, and will require some experimentation and planning to solve. But there are also a few incredibly easy stages that feel out of place. It makes sense in the beginning when you’re still learning the ropes of the game. But when you’re in some of the later worlds and come across an easy to solve level, it throws off the difficulty curve a bit. 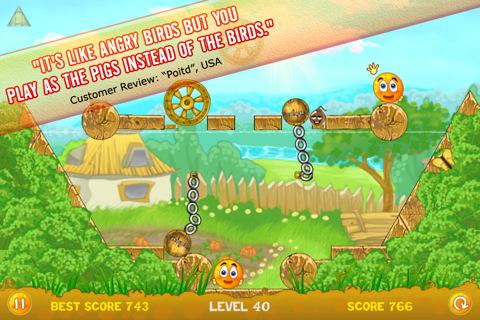 In the grand tradition of fun iOS puzzles, Cover Orange is almost ridiculously adorable. The little oranges all have big eyes and bright smiles, they giggle and cheer, and when one of those evil raindrops hits them, you can’t help but feel terrible. All of the stages have a bright, outdoorsy feel, with plenty of trees and cottages in the background and crawling bugs in the foreground. You almost wish you could pinch the game’s cheeks, it’s so darn cute.

With games like Angry Birds and Cut The Rope dominating the sales charts, it’s easy to look at Cover Orange as yet another me-too adorable puzzle game. But that would be a mistake. The game features challenging, inventive, and just plain fun gameplay that will test even the best of players. Besides, look into those little orange eyes: you can’t say no to that, can you?