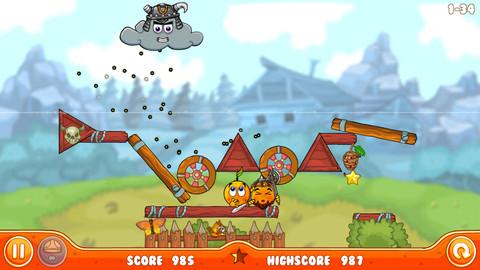 Some days are all sunshine, and some days you’re an orange praying the omnipotent finger of the player will successfully use physics and whatever junk may be lying around to create a ramshackle roof over your head, because there’s a cloud with a face wearing the helmet from Skyrim hell-bent on stoning you to death.

With the proliferation of mobile games, we’ve seen a renaissance of games completely divorced not just from reality but from logic, and in the most extreme cases, coherence. In the days of the NES, anything with eyes could be the lead character in a 2D platformer, but iPhone titles are really stretching the limits of random. As you can probably surmise, Cover Orange 2 doesn’t have any narrative to speak of.

The goal of Cover Orange 2 is to end your turn with a roof over your fruit’s head. At the outset, this is as straightforward as covering the whole area above the orange with a treasure chest, but things quickly become far more complicated. Each round has you dropping a set of objects in a set order, which may or may not include the orange itself. These are physics puzzles. You can roll a wheel down a hill to detonate a bomb at the bottom, or just use its weight to push down one end of a seesaw or open a trap door. Difficulty spikes early, and explanations of what item does what are gone too soon.

Cover Orange 2 follows the Angry Birds structure of a set of worlds made up of a set of levels that measure your performance with a set of semi-optional stars. You get one star for completing the level and one for completing it well. The third star is randomly handed out by one of the throwaway animal characters decorating the level, and you’ll have to click quickly not to miss it. It’s an annoying mechanic which occurs during the phase where the killer cloud passes over, and only serves to draw attention to how long it takes for the cloud to pass. 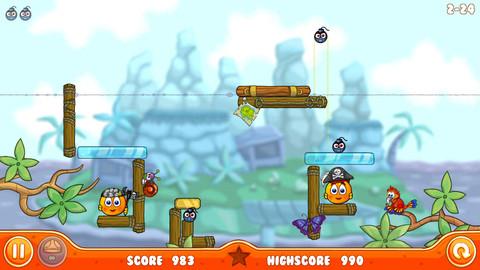 Cover Orange 2‘s presentation is in line with its world and narrative: that is to say, phoned in. It may sound petty, but with so many games occupying similar genres with the same structure and controls, many of which are free, the art style and framing devices become much more important.

While the bite-sized nature of Cover Orange 2 lends itself to mobile play, the difficulty of the puzzles may not. The physics on tap are definitely up to par, and the way a round plays out is novel, but if you get stuck and don’t really like physics puzzles, there’s nothing superlative here to drive you onward. Who’ll stop the rain? Probably not most people for very long.