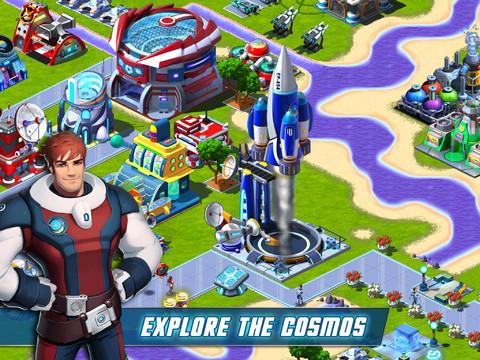 Cosmic Colony isn’t out of this world, but it’s still a fun city building sim

It’s hard not to admire the determination of the human race after playing Gameloft’s Cosmic Colony. Just moments after crash landing onto a distant planet in the year 2088, they’re already tossing up headquarters and scouting out the landscape for sites for potential mines. There’s none of that nonsense of moping over the presumably wrecked spacecraft or even worrying too much about the inevitable injuries.

Before long, there’s a whole city sprawling about the planet’s surface, complete with a launchpad for expeditions to new planets to expand your colony. It’s all a bit familiar, although Gameloft manages to add enough options to distinguish it from some of its competitors.

Cosmic Colony is basically CityVille with a space theme, but don’t let that chase you away. The basic structure is very well done, if a little predictable, complete with an energy bar that doesn’t require you to sit out for hours at a time when you run out and a wide assortment of buildings that you can purchase without premium currency. Once you get your buildings up, you can harvest both money and morale from them, and you can get a better idea of your city’s layout by altering between viewing modes that either show everything “as is” or highlight the arrangement of streets that might be hidden behind another building. There’s even a strong social component here, which lets you visit your friends’ cities and swap out resources with them for faster building.

It handles those resources a little differently than most city building social games, which usually just let you drop down a mine and automatically start pulling out gold or some other specific resource regardless of the location. Here, you gain resources such as chemicals or minerals by playing a mini-game of slots that rewards you with a random assortment of either (depending on the purpose of the mine itself). On the one hand, this approach adds a bit of suspense to the usually drab activity of mining; on the other, it means you sometime won’t get the exact type of resource you need without more spins, which require a hefty chunk of your gold. If your luck’s particularly rotten, you can expect to wait a long time before snagging the materials you need (particularly since each spin takes a few minutes unless you speed it up with currency), which contributes to an overarching feeling of slow progress.

Other activities take advantage of these mini-games as well, like your daily free rocket ride into nearby space for special rewards such as a cosmetic items for your city that just happen to be floating out in the darkness of space. The best are the pirate invasions, in which you have to defend your little colony by slashing the raiders’ ships out of the sky with a swipe of your finger in the style of Fruit Ninja.

Taken together, their addition adds a welcome dose of a variety to a game that could have easily devolved into yet another uninspired city building sim. For all that, though, you’re not going to find a lot of innovation in the core gameplay if you’re already committed to another city builder; it’s still the same type of game we’ve seen many times before, but with a charming space theme.