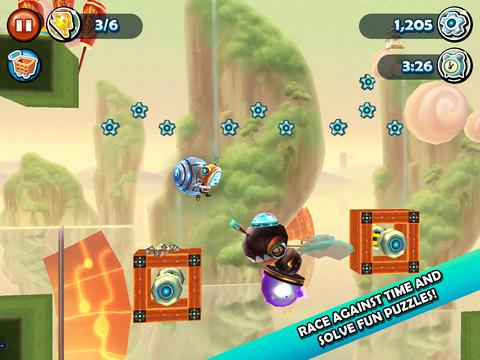 Unplug and get going with Cordy 2 in this cute platformer.

TV-like electronic beings shouldn’t be so adorable. Cordy 2, from SilverTree Media, is a platformer starring a cute little robotic hero named Cordy who’s just trying to rescue all his friends. They’ve been stolen away by the evil Boogaloo and his goons, and waiting between Cordy and his gang are treacherous teleporters, unlockable areas, and puzzles. Cordy’s got his work cut out for him, but you’ll have a blast with him in this colorful little game bursting with personality.

Cordy 2 is a free app, but only four levels are available for free players. With that said, you get a sizeable chunk of the game to explore before plunking down the $4.99 for the full version or splurging on the variety of available in-app purchases. These microtransactions are completely extraneous and range  from colors and costumes for Cordy, so the only real admission price is the $4.99 fee to unlock the rest of the available levels. With that out of the way, it’s a refreshing model that encourages players to try out the game with plenty of content for evaluation purposes rather than one level off the bat, then demanding the $5 fee.

Cordy 2 is well worth its asking price if you’re a platformer fan. On-screen touch controls move Cordy through each level, with a context-sensitive button controlling his jumps, teleports, and speaking to other characters. While the on-screen direction buttons can sometimes make the game frustrating – as is the case with many touch-controlled platformers – the overall control scheme is tight and responsive, so navigating the game world with Cordy is never too frustrating. You’ll frolic through levels decorated with gorgeous night skies, robotic paradises, and more, running and jumping here and there with the greatest of ease. Cordy can swing from special pieces of the environment, and he can also collect Gears, the game’s form of currency, to unlock power-ups and other items around the world.

Across three in-game worlds, you’ll aid Cordy in exploring multiple differently-themed levels with various aesthetic motifs and unique level creations to keep things interesting. Once you’ve completed each level path you can look forward to other puzzle areas unlocked by the Gears collected in-game. These additional levels grant you more Stars, which much like the newer Mario games, are the main methods of advancement in the game. Collecting more Stars will net you more progress, and it’s rewarding to aim higher with each new level.

Simple objectives, challenging platforming, and an adorable art style make Cordy 2 a worthy addition to your library. It’s got a robust set of in-app purchases for those looking to take their game further, and plenty of heart to carry it along. Put this little robot in your pocket and check out the first game while you’re at it.