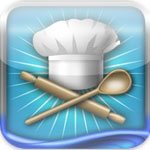 Are you a “foodie?” Do you find yourself recording those Paula Dean and Giada shows because you don't want to miss a good recipe or preparation tip? Well, if you're a foodie and a gamer, then you'll love the new Cooking Quest for iPhone published by Big Fish Games and developed by GameMill and Bubbler Media.

The set-up reads like a description of a Food Network show: Foodville is holding its annual Restaurant Row Chef's Challenge, and you've been invited to participate in the competition. You start with a limited budget, and just like a live show, you're under constant time pressure to complete your tasks. In the end, the food judges decide your fate by awarding you 1 through 5 stars for your culinary creations.

If it sounds like I'm describing a time management game and hidden object game at the same time, then you are correct. Cooking Quest is both. While combining the act of finding objects in a room with rapidly preparing a meal don't sound compatible, the developers did a beautiful job of integrating them seamlessly. You start the competition at the Steak House. Once inside the Steak House, you have four locations to scour for hidden objects to earn a high score (which is money). More money enables you to buy the better ingredients. Better ingredients means you have the possibility of tickling the taste buds of the judges. If you perform poorly and don't have any money at the end of a level, you'll earn the token 'basic' ingredients which will limit your chances of earning 5 stars for your cooking skills.

Once you've searched all of the rooms in a restaurant location, then you're taken to the preparation area. Now, the game's mechanics change to become more like a time-management or multi-tasking game. Here you see ingredients in little cubby holes with a plate, stove and oven at your disposal. If you can figure out how to match ingredients and utensils, cook some items, place items on the plate, AND complete your tasks in the prescribed amount of time, then the judges will smile down upon you. They'll give you higher ratings if you have incorporated the finest ingredients into your creations, but the emphasis is on the quality and the completeness of the meal, as well as the speed.

While the graphics were superb with many clever, object-filled rooms to search, I found the sound to be lacking. There was no music to speak of, and the environmental music in each room sometimes got on my nerves. In fact, in one room I found the background sound effects to downright creepy and I shut off the sound to my iPhone. What a shame. Music would have added a lot to the game, but some developers just don't think it's important to worry about sound and music in an iPhone game.

Is it worth it? I would say that if you are a food and wine 'aficionado,' as I am, you'll love Cooking Quest. I really enjoyed the combination of the two game mechanics in one scrumptious package, and it is definitely worth a little extra money at $2.99. You'll also find that the replay level is a plus. In fact, I wanted to earn a better rating from the judges, so I played some levels over and over so I could earn enough money to buy the finest ingredients. After several tries, I finally got my first 5 star rating for a meal that I prepared. Watch out Paula!