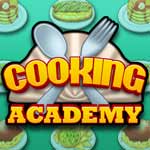 When the first man dragged himself out of the primordial soup and
heard his stomach growl, the age old question was born. "What’s for
dinner?" Well, he might have been satisfied with roots and berries, but
these days most of us have slightly more refined tastes (and slightly
bigger waistlines). And that, my friends, is why a good cook will never
go unappreciated!

But, if you’ve signed up at the Cooking Academy,
you already know this. As a new student, you must cook your way through a variety of appetizers, breakfasts, lunches, dinners, and desserts. If you can navigate through all of your classes, and pass the exams, you’ll graduate and earn a coveted culinary degree (and a nifty chef’s hat to boot).

The mouse is used for all of your cooking tasks, from cutting to chopping to stirring and frying. If you’re a fan of Cooking Mama
on the Wii or DS platforms, some of these tasks will seem very familiar. You’ll be grating cheese, peeling potatoes, slicing bread, chopping garlic, and sauteeing all manner of ingredients in much the same way as in Cooking Mama. To combine ingredients together, you’ll be shown an obscured version of the next item needed, and must
try and select the right ingredient to match.

There’s also the same stove top boiling technique, where you are asked to do certain actions just as the instructions pass the bar at the bottom of the screen. This includes adjusting the cooking temperature, stirring the pot, and adding ingredients. You’ll also be cracking lots of eggs, and spreading butter in the frying pan, though this is much easier using the precision of the mouse than it ever was with the Wii controller.

Despite these similarities, Cooking Academy adds several unique tasks as well. You may be asked to assemble food like burgers or ice cream cones, which is done by dodging falling rogue items and catching only those that match the picture of your order. Mashing is done by looking for shadows that hover over certain objects, and clicking the right target. There’s delicate precision tasks like separating eggs, and peeling away lettuce leaves, which may require a bit of practice to master. For many recipes, you’ll be asked to knead or mix the dough, which is done by tracing over the lines from rounded edge to arrow tip. There’s a lot of food assembly and folding tasks, like sealing up spring rolls or shaping burritoes or crepes. To complete these, you follow the directions on the screen, which generally means tracing over arrows and clicking certain spots as you go.

The recipes themselves also set the game apart from Cooking Mama. Instead of food arranged by ethnic origin, Cooking Academy breaks up recipes into meal classifications. The recipes include both the
mundane (like spaghetti and pancakes) and the exotic (like gyoza and creme brulee), but all are interesting and detailed.

If there is a progression in difficulty level as you advance, it’s hard to notice as you play. The exams generally get harder, but not by much. The recipes might include more steps, but not always, and you use the same skills in the beginning of the game as you do in the end.
Variety is provided by the recipes themselves, and the constantly switching between different mini-games.

What’s pretty cool about cooking academy is that you can actually learn a thing or two about real cooking. While the recipes won’t give you exact proportions, they are fairly accurate in terms of ingredients and the general cooking process. Plus, there’s lots of interesting facts thrown in before each recipe.

The mouse proves to be a decent controller, and it’s actually a lot easier to control than the Wii remote in Cooking Mama, making it easier to be precise and get better results. It helps if you have a large mouse pad or open space, since you will need to do a lot of scrolling back and forth.

Some of the tasks seemed overly difficult, because they require you to guess at things you can’t possible know unless you’ve played before. For example, when cutting shapes in the dough, you need to be careful you don’t overlap or cut over the edge, but you’re not shown the size
of your cutout before you make your first attempt. Also, when adding ingredients in the mixing mini game, some look overly similar, like baking powder and sugar which are both white powders on a spoon. There’s no practice mode, unfortunately, until you’ve already played through a recipe and been graded.

Despite these occasional frustrations, however, most tasks are fairly easy to complete while retaining a good score. If anything, it could be said that Cooking Academy is an easy game to beat, and most players should have no trouble passing all of the courses and exams. Should you fail, or simply get a lower score than you’d like, you can replay any recipe and increase your grade.

If you’re looking for a cooking game for your PC that is much less difficult than Hot Dish and more exciting than Family Restaurant, Cooking Academy is a good bet. All together, expect between 4-5 hours of solid game play, with decent replay value if you want better grades on your recipes. Who knows – you might even pick up a few ideas for dinner.