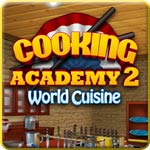 Looking to spice up your menu plan? Cooking Academy 2 is basically a huge collection of cooking-themed minigames that might actually give you some inspiration in the kitchen. It’s not an original concept, but it’s still fun to play.

The story picks up where the last game left off. As a budding chef, you’re privileged to attend the Annual World Culinary Workshop. The student who scores the highest on the qualifying exams at the end of the workshop will receive 1 million dollars from the World Culinary Board to start their own restaurant, so you better get cooking.

If you’ve played the original Cooking Academy, or Cooking Mama on the Nintendo Wii, then you’re already familiar with most of the cooking tasks. In Cooking Academy 2, the mouse is used for everything from chopping garlic, to stirring mango chutney, to folding fortune cookies.

Like in Cooking Mama, recipes are broken up by ethnic origin. You must complete a bunch of recipes in order to earn your way into the cooking exams, where you complete several special tasks from the recipes in order to advance. You can practice recipes as often as you wish, and replay any level you want for a better score.

When it comes to the game mechanics, there are a few new additions worth mentioning. In “raid the refrigerator” boards, you get to play a hidden object game that takes place in the ice box. The ingredients you need to find are directly related to the recipe, which is kind of neat. You can also wash items, like corn and rice, by filling up a pot with water, swishing the mouse around, and dumping out the water.

Another minigame has you juicing citrus fruits, like limes and lemons. For this, you cut the fruit by moving your mouse along the green arrow, and then juice it by following the circular arrows over the juicer. There’s also a “filling” game, where you have to fill items like donuts with cream. This is tough, since you must depress the mouse just long enough, and not a moment too little or late.

Still other tasks have been taken from the original game (and others of its ilk) and improved for more playability. Most notable was the vegetable peeling minigame. I used to dread those peeling tasks in Cooking Mama and Hot Dish, but Cooking Academy 2 has made this a lot more fun by counting any swipes as successful, and not just straight lines.

Cutting the dough is another task I dreaded in previous cooking games, but it’s been made a lot easier by giving the player more dough to work with. Speed is given a higher priority than accuracy, and it works a lot better.

Then, of course, you find the old stock standard tasks which you can find in any cooking game these days. You crack eggs by tapping them with just the right speed against a bowl, and crimp dough by clicking over the gold arrows in the right spots. There are a bunch of chopping and slicing and mixing games, done by dragging the mouse along green arrows and clicking the mouse over gold arrows. You can also expect lots of folding tasks, where you follow a series of prompts to put together Italian calzones and Indian samosas and such. Then there’s the usual task of adding ingredients by guessing what ingredient is obscured in a picture.

Some of the more challenging tasks include stove top cooking, baking, and frying. When baking, you need to set the oven temperature, and then click it off when the meter reaches the green area. The green area is a moving target this time, and it’s really fast. However, approximate clicks are generally good enough. When frying, you need to add ingredients to a pan or grill, and flip them at just the right moment or they’ll burn. This is tough because you must juggle several items at the same time, but you soon get the hang of it.

The recipes themselves are very interesting. In addition to the usual Italian, French, and Chinese foods, it was a lot of fun to make Thai, Korean, and Indian foods. The food includes typical dishes, along with a few exotic ones. To name a few, you can make poppadoms, tandoori chicken, tiramisu, BBQ pork buns, green curry, and chicken pad Thai, along with mundane items like hotdogs and corn on the cob. For every recipe you learn, you’re also told a bit of background, like how it is traditionally served, or where it originated.

While some tasks start out tough, you pick them up very quickly, and eventually you can really fly by all of the tasks. To put it in perspective, I spent over 2 hours playing through the first cuisine and learning the techniques, but was then able to breeze through the rest in an 1 hour each, despite the increasing number of recipes. Still, despite getting easier as it goes along, there are hours and hours of game play to enjoy, so you can expect around 8-10 hours at the very least.

The graphics are improved over the first Cooking Academy, and with a few exceptions (like solid orange colored almonds), they are generally pretty good and very clear. The music is suitable for the background, and changes to match the theme of each restaurant, which is also pretty cool.

On the downside, there isn’t a huge amount of originality. Cooking Academy 2, like it’s predecessor, was obviously heavily inspired by Cooking Mama. It would be fair to say that it’s like an extension of the first, with new recipes but very little unique content.

Still, if you’re a foodie, or you if like to cook, there should be plenty in Cooking Academy 2 to keep you busy. It’s not as challenging as the Hot Dish games, but you will need to replay boards frequently if you want all expert scores. As a bonus, you’ll learn some interesting things about a bunch of ethnic dishes, and maybe get a few ideas to use in the real world.