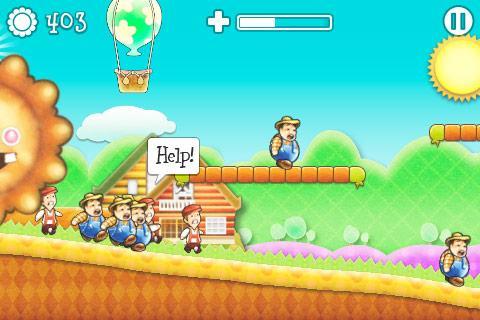 Giant cookies that will crush you to death are ESPECIALLY bad for your health.

Despite having the word ‘rush’ in the title, there’s no time management to be found in Cookie Rush. Instead, you’ll find the boulder scene from Raiders of the Lost Ark – except the boulder has been replaced by gigantic, evil cookie. Why nobody thought to splash some milk on it is a mystery, but at least you’ll have fun running away.

An arcade distance-running game at its core, Cookie Rush is all about how far you can keep people running from an omnipresent rolling cookie as the world scrolls from left to right. Tapping the screen makes a jump point, forcing all the people fleeing for their lives leap up. If enough people are fleeing, they’ll call for a rescue balloon which eventually appears at the top of the screen. Bounce as many people into the basket as possible to rescue them and earn big points. The game ends if all your people get crushed by the cookie, fall into a trap or the cookie grows and accelerates past a certain level. Each level is separated by an ocean that you must leap before reaching a new terra firma.

Of course, it’s not quite that straightforward. There is an evil, self-centered man (looking an awful lot like Luigi from Super Mario Bros) who will steal the rescue balloon all for himself if he gets into it, leaving your other rescuees behind. There are also prisoners who are locked in cages. If you free them, the balloon appears sooner. If you don’t, they help slow the cookie down. Finally, there are animals who will harm your people. But if they are avoided, the animal will, like the prisoners, help slow the cookie down and shrink it.

Cookie Rush can last a very long time, with huge numbers of people to be rescued. The achievements – of which there are many! – tell the tale: Cross 20 continents in a single try; Save 300 characters in a single run. Cookie Rush feels very much like an arcade game, and the simple but long-running gameplay are great reasons why.

The production values aren’t too shabby either. The graphics, while lacking in character, are well-drawn, colorful and clear. The music is largely forgettable, but doesn’t get in the way. Besides, you’ll be too busy hearing the bounces and jump points being made. 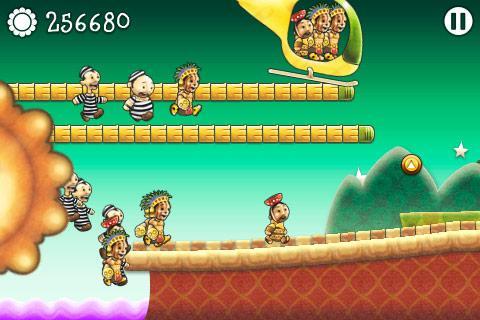 The only real problem with Cookie Rush is there just isn’t enough depth, and the gameplay concept isn’t strong enough to carry it. The only thing you can do is make people jump. Games like StrawNinja have multiple obstacles and actions. Another game, Rat on a Scooter XL, features an array of power-ups to alter the gameplay if you want some variety. Cookie Rush only has one gameplay feature that, ultimately, is only measured by how long you play it.

One other issue comes from how the game determines you lose. As mentioned, if all your people plummet or get crush, the game ends. As long as one person is still running, the game isn’t over. However, if you lose your last person while another just starts their run, Cookie Rush doesn’t recognize this and abruptly ends your game. Though not game-breaking, it is still annoying.

Cookie Rush ends up being really good rather than great. It’s well put-together, for all that it offers. But ultimately Cookie Rush is more of a snack than a full dessert. More options, items and variety would go a long way to making Cookie Rush a fair bit more interesting.

Legacy of a Thousand Suns Review