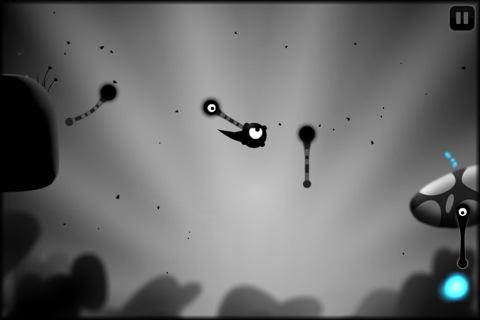 Contre Jour is a beautiful blending of familiar gameplay elements

In my research about Contre Jour, I learned that “contre jour” is actually a french term used to describe a certain type of photograph known for extreme backlighting. It causes the subject in the foreground to appear as an outline of shadow. After reading this, using it as the name of the game suddenly made sense, since Contre Jour uses this throughout to great effect.

In Contre Jour you’ll be controlling a little blob with a tail called Petit. Your job will be to use the environment to move him around and collect the glowing blue lights on each level. The catch though, is that you don’t control Petit directly. Rather, you manipulate the world around him to roll, swing, and slingshot him towards the safety of the soft blue light.

Need him to roll around a bit? Just drag the landscape up and down to form hills and valleys. When it’s time to get swinging you can grab and attach tentacles (some elastic, some not) around the board to pull from to and fro. The tentacle mechanic reminded me of Cut The Rope, and is used here equally as well as in that wildly popular title.

The difficulty over the game’s 60 levels ranges from super easy to crazy hard. While there aren’t any specific enemies to speak of, there are certainly plenty of obstacles and hazards waiting to kill poor Petit. You’ll find yourself in situations where perfect timing on your swings and slingshots will be the only way to ensure grabbing all the blue lights and hitting the large light to end the level.

If you’re a fan of World of Goo, you’re probably going to get the same vague feeling of deja vu that I got from Contre Jour. Don’t get me wrong, it’s not a Goo clone or anything. It’s just that the game employs moving blobs around a sparse landscape and getting from point A to point B. I’d call it more homage and inspired by, almost like a spiritual successor. I loved World of Goo so much that this made me like Contre Jour all the more, since it respects without infringing.

Like the photographic term that served as inspiration for the game’s name, Contre Jour is sparse to look at. White shaded backgrounds, and everything in the foreground is black with hints of gray. The blob you’re moving around, the tentacles that help swing him around, the ground itself – all this same style. The only hints of color are the blue lights that you’re trying to collect in each level. It’s stark, but taken as a whole with the music and presentation, it really works well to create a vivid feel. 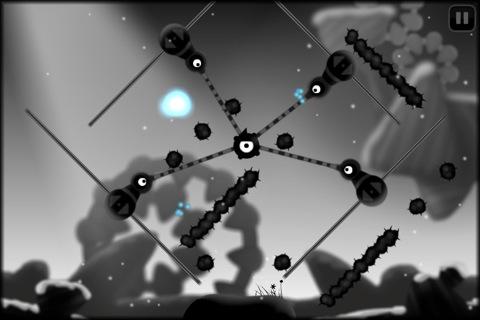 While it’s available on both the iPhone and iPad I can’t really recommend it on the iPhone as strongly, as this is a case where the smaller screen serves to the game’s detriment. Needing to drag around tentacles with specificity, and sometimes numerous ones at once, really benefit from having the larger screen to work with. Is the game unplayable on the iPhone? No. But if you have the choice, it’s a no-brainer to go with the iPad.

Some may look to pass on the game because at first glance it just looks like it’s taking little bits from different games and not adding anything new. The look of Limbo, the style of World of Goo, The rope mechanic of Cut the Rope or the land shifting of Bumpy Road. Yet I would argue that, in this case, all of these elements mesh together perfectly to create a game that feels so inviting that you’d be a fool to turn away. Come to the light.