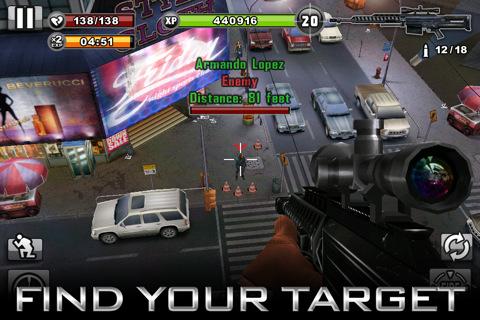 The life of a mobster isn’t always as sweet as it sounds – especially in social games. After all, how many times can you really enjoy collecting protection money or rubbing out the competition if all you’re doing is selecting an option from a menu screen? Contract Killer remedies these woes, offering a more hands-on approach to Mafia style gaming.

Players will start out the game as a sniper for an organization known only as the IPF. Early on in the story, you’ll be disavowed from the agency and find yourself on the run. As a hired gun, you fall in with the mob as you kill your way towards discovering the truth about the IPF and the questionable shenanigans they were up to.

Contract Killer plays a lot like Mafia Wars if Mafia Wars ditched its menu-driven gameplay for some hands-on Silent Scope style action. The basic freemium elements are all in player here: players will accept different missions from different people, spend energy to complete them, and earn experience and cash that can be used to purchase better in-app items (in this case, guns). The big difference here is that completing a mission is more than a simple click of the mouse or tap of the screen.

Each mission unfolds as a 3D action scene with you in the role of the titular contract killer. Initially you’ll be equipped with little more than a hunting rifle, but it’s enough to get the job done (in the early stages at least). Players will scan the area, find their target, and zoom in using the scope. Once you have the enemy in the crosshairs, completing a contract is as easy as pulling the trigger.

The standard freemium elements really compliment the gameplay nicely. For example, players will need to wait a certain amount of time before receiving another offer from a client, and you’ll need to spend the money earned in-game on extra ammo, all while trying to save up for a better gun. But while the marriage of freemium and action elements ends up being a winning combination for freemium gamers, Contract Killer may not satisfy conventional action audience nearly as well. 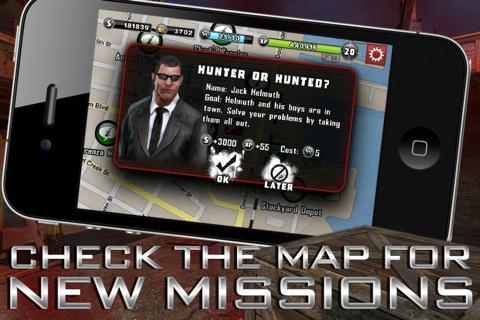 The gameplay here, while passable, is fairly basic by 2011 standards. Targets go down with a single shot no matter where you hit them. Enemy AI is something of an embarrassment too, and there are no bonuses for headshots or other complicated targets. All in all, it feels like the action has been dumbed down to let the player win at all costs. The only time we failed a mission was when we decided to pop off some guards before going for our main target, which gave him ample time to run away (which, until that occurred, we didn’t know he could do).

There’s also a surprising lack of social elements here. For a game that’s so clearly inspired by Facebook-style Mafia games, Contract Killer is completely devoid of any sort of social play.

Contract Killer is a tough game to judge, because it’s hard to know which audience Glu is really going after. If it’s the Mafia Wars crowd, Contract Killer deserves a big check in the win column. If it’s action gamers who haven’t really embraced freemium gaming yet, Contract Killer doesn’t quite go far enough to hold their interest for long.