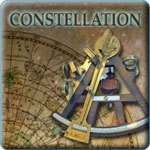 If we were to trace casual games back to their roots, then we would certainly come across old standbys like Reversi or Bejeweled. These were games that didn’t try to pretend they were anything more than fun, simple diversions. But as history has shown, just because they were simple, didn’t mean they were without merit. Constellation, from indie house PaperDragon Games, sets out to prove this same ideal, with pretty decent success.

The premise behind Constellation is simple. There is a board with planets of three sizes, connected in various ways by lines (hence the name of the game). When you click on a planet, you gain "control" over not just the planet you clicked on, but also the planets immediately connected to it. Your opponent then does the same thing, claiming other planets on the board. Each planet collected is given an amount of control exerted on it. So, for example, if you click on a planet and your opponent clicks on another planet that is also connected to one between you both, it will become neutral, as you have an equal amount of control over that world.

Each planet can be upgraded to be able to exert more control over neighboring planets. Large planets can be upgraded with bases (which appear as simple rings) three times, medium planets twice, and small planets only once. Naturally, large planets are better strategically, but you can spend a lot of time upgrading them while your opponent gathers more smaller planets to add to their number.

If a base on a planet you’ve collected is threatened with being overpowered by your opponents control, a brief alarm will sound, indicating that you should upgrade that planet’s defence, or find another hole in your opponent’s planets to try to strike first. Should one player overpower the other, the loser’s base explodes, and the planet – not to mention all weaker surrounding ones – convert to the winner’s control, which can cause a major cascading effect on the board.

The amazing thing about Constellation is that it’s a very simple concept once you get the hang of it. Trying to explain Bejeweled feels like it takes more time with verbal examples than it takes to just have someone sit down and play the game. It feels like that here. There isn’t a lot of depth on the surface, but the gameplay can be as engrossing as you’d like it to be. It is very much like a board game: simple, straight-forward, but fun.

The production values in Constellation are not necessarily the greatest, but then again, neither were Reversi‘s. The graphics are simple but effective, and the music and sound effects are minimal but unobtrusive. Of course, these sounds can be disabled in the game’s option menu.

What gives Constellation its legs is the ability to have up to four players on the same board. While you can play against the computer (and if you set it up with anything other than "stupid" difficulty, you’ll be in for a challenge) it is possible to have all four players be people.

The best part, though, is the fact that every game of Constellation can be different. The game will, if you ask for it, randomly generate a new board for every game. There is the ability to play on a regular rectangular or isometric (hexagonal) grid, but these games can get predictable unless you’re playing against human opponents. Stick to the randomly-generated levels and it will keep you guessing.

The only complaint about Constellations is that it is a pretty bare-bones game. There are some options to enable special planets to appear on the board (like a Terran planet that automatically upgrades to a level two base right away) or a handicap for the player who gets the first move, but not much else. There is nothing in the way of unlockables or achievements, so those who enjoy having a wall of trophies shouldn’t look here.

Otherwise, what Constellation brings is a solid, simple versus game that can be as deep or dynamic as you or the players you’re with want it to be. While it may not be as major a release compared to icons of casual gaming like Reversi or Bejweled, the philosophy behind the gameplay should not be ignored. Sometimes sweet and simple is all a game needs to be.