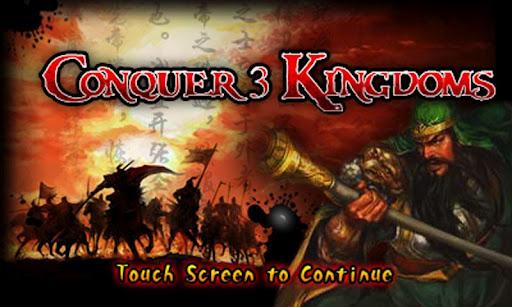 “The big adventure RPG?” More like the big disappointment.

The first thing you’re likely to notice about Conquer 3 Kingdoms is that despite being billed as an RPG, the actual game is more akin to classic arcade beat-em-ups like Double Dragon. Instead of roaming around on an open fantasy landscape, you’re restricted to a limited side-scrolling area, and must do battle with hordes of enemies. In fact, it’s arguable that LeTang mixes the arcade formula up a bit by throwing in conventional RPG elements like character levels, inventory and skill points. Unfortunately, the game is never able to elevate itself beyond much more than frantically mashing buttons.

One of the game’s most obvious issues is that it tries to cram the equivalent of a full-blown RPG overlay onto the relatively tiny display of handheld devices. On a 4.3-inch screen, everything is barely visible, which can make keeping up with the action a bit of a chore when the swords start swinging and the spells start flying. The small size makes controlling the game a bit of a problem as well; the basic movement and attack controls are alright, but access to more advanced commands or dedicated magic buttons can be tricky, especially in the heat of battle.

And while they’re functional, the movement controls aren’t a vast improvement by any stretch. Your character is directed on his journey by four buttons – up, down, left, right – which offers a very limited degree of control. By laying the controls over the playing field, Conquer 3 Kingdoms makes it very easy to move the action directly below your thumbs, which (unless your thumbs are invisible)means you won’t be able to see what you’re doing. Lift your digits to have a look? You’ll stop moving or swinging, making it easy for one of the baddies to take a poke at you.

Fortunately, they don’t always seem inclined to do so. In the finest tradition of classic kung-fu movies, enemies in Conquer 3 Kingdoms will often hover around the periphery of the screen, more or less ignoring you as long as you don’t venture too close to them. The downside to this is that sometimes they’ll skulk mostly (or even completely) outside the boundaries the screen, hidden in the netherworld that exists outside your phone; accordingly, you won’t even know they’re there until you try to walk somewhere else to have them steal upon you! 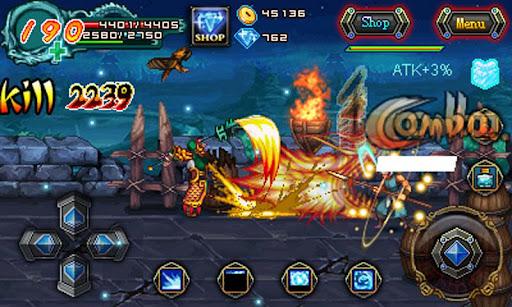 On the plus side, LeTang follows through on part of their promise. This is certainly a big game, with 36 areas to explore and 16 playable characters of differing abilities. That is, sixteen potentially playble characters. Outside of “Guan Yu,” available at the start, the rest of your roster must be unlocked with “diamonds,” the in-game currency. There are a number of “tasks” to complete, like killing a given number of enemies or honing certain abilities,but everything seems to earn you skill points, leaving diamonds frustratingly out of reach.

So yes, although Conquer 3 Kingdoms is “freemium,” many of the more powerful and advanced (read: enjoyable) features must be purchased. What’s even more odd, I can’t seem to figure out any way to actually buy the diamonds needed to access them. Options for earning diamonds by signing up for other games and services, like eHarmony, Netflix or Big Fish, are readily available, but I can’t find any way to actually give these guys money.

As you make your way through the game, the excitement of finding new and better weaponry is tempered by the distressing number of them that can only be used by a particular character, once more driving you in the direction of the game’s premium, mysterious diamonds. And while Conquer 3 Kingdoms does support character growth, as all RPGs do, points are applied automatically to health, magic, attack and defense skills. You’re not actually playing a role, in other words, you’re just pushing buttons and letting the computer do all the thinking. Even the RPG components have taken on the qualities of button-mashing brawlers. 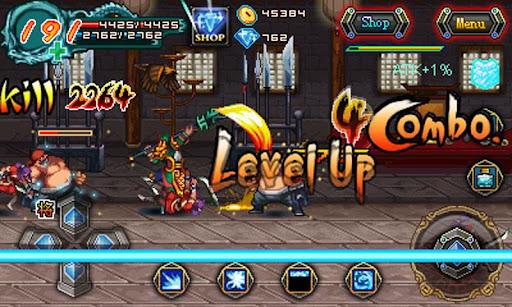 Capping the experience is the half-baked translation from its native Chinese to English, which isn’t disastrous but is most definitely distracting. Your inventory is your “Porperty,” explanations of your various tasks are found in the “Task Describe” section of the screen and the occasional bits of dialogue have all the smooth-flowing, easy English of early 60s Godzilla flicks. Sound is an issue too, in that there is none; the game offers an option to turn “music” on or off but regardless of what I picked, the whole thing played out in complete silence.

Perhaps that was for the best however. Even a small amount of time alone with your thoughts, and you’ll come to your senses on this one.Conquer 3 Kingdoms isn’t the worst game ever, but it’s barely what I’d call enjoyable. With so many better options on the market, I can’t imagine why you’d want to spend very much time with this one.