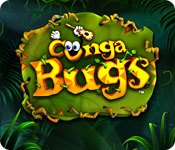 GameTantra’s colorful little Conga Bugs stands out in the crowded marble blasting genre, but not for any one reason. Rather, its mixture of better-than-average graphics, minor but compelling innovations, and fun extras combine to create a game that, while not particularly original, is nonetheless highly engaging casual entertainment.

It turns out bugs like to dance in long lines when people aren’t watching. In Conga Bugs, players take on the role of an entomologist, observing and cataloging how different species frolic. It’s a simple shtick, but GameTantra has, via witty cartoon strips, a narrator who sounds a bit like British comedian Stephen Fry, and fun little bonuses such as a customizable insect orchestra composed of unlockable rare bugs, developed this idea into a full-fledged fantasy world.

Helping players buy into the story are the bugs themselves, which are endearing and expertly animated little googly-eyed creatures. They serve as a sort of welcoming party; a friendly entry point to a game loaded with complex variables, power-ups, and game types.

Play is similar to other ball-blasters: Bugs snake along a set track (or tracks) and players have a launcher they use to shoot bugs at the succession of dancing insects, which marches relentlessly towards a hole in the ground through which they try to escape. Match up three or more of the same color and they’ll transform into butterflies and fly away. However, if even a single bug makes it to the hole then it’s game over.

From the very start players have access to a wide variety of abilities that can be initiated either by shooting bugs with power-up icons floating over their heads or aiming at markers that occasionally appear over sparkling ruptures in the ground. Many of these power-ups are common to the genre—you can slow the line, stop it, and put it in reverse—but some are pleasantly unusual, such a catapult that lets players launch bugs over blocking lines to hit insects in back rows, and a homing missile that zeros in on your choice of bug anywhere on screen.

Then there are the environmental variables, such as slides that scoot bugs down one at a time, and speed arrows that accelerate the whole line for a brief moment. The trickiest levels have branching paths that players can control much like a train track switch by shooting a bug that blocks one side or the other. These obstacles mean that you’ll need to carefully examine each level’s layout and figure out a strategy early on in order to succeed.

Indeed, Conga Bugs is a demanding game. You can expect to fail at least one or two levels in each set of nine, which makes things particularly suspenseful since we’re provided a finite number of lives. What’s more, extra lives—earned by collecting hats dropped by the bugs that bring up the back of the line—don’t come easy.

But the difficulty and risk are part of what makes the experience so compelling. Each time I failed a level I looked at my dwindling store of lives and realized that I needed to reset my focus to keep it from happening again. And the feeling of satisfaction I enjoyed on the rare occasions that I managed to clear one of the game’s stages without losing a single life was terrific.

On the subject of stages, there are 15, and each is composed of nine levels, which makes for more than 130 missions in total—plenty, by any reckoning. To keep things fresh, GameTantra provided multiple game types. “Standard” levels—which involve basic bug-blasting action—are most common, but there are also “frenzy” games, in which players fire rapidly at dozens of small conga lines to earn as many hats as possible, as well as a fun—if not completely original—towing game in which players steal bugs from the encroaching line and then blast them back.

There are also several “puzzle” levels, which provide players with just a few bugs to clear a screen full of conga lines. These are tricky enough that they can require several attempts to complete and end up stalling the game’s otherwise swift pace. In truth, they probably would have worked better had they been plucked out of the story mode and organized into their own little game, but at least they cost no lives. Plus, players can bypass and revisit them whenever they like.

Were I forced to poke a hole in Conga Bugs‘ design, I’d probably focus on the fact that distinguishing between bugs can be needlessly complicated. Their odd shapes means it’s sometimes difficult to tell how many bugs of a given color happen to be grouped together.

Plus, some bugs are multicolored and can be easily confused with other bugs sporting similar hues. The orange bugs, for example, have red markings on their heads, and I sometimes mistook them for maroon when viewing them on the launcher from the corner of my eye.

And all of the bugs’ white googly eyes became a bit of a problem around the sixth stage, when white bugs—the bodies of which blended in with the orbs of insects behind them—started showing up.

That said, the occasional bit of difficulty in discerning bug types just forced me to be even more alert, which probably isn’t a bad thing, given the game’s challenging nature. And if that’s the worst that can be said about Conga Bugs, then it’s in pretty good shape. It may not be particularly pioneering, but it’s one of the most polished and flat-out fun marble blasters I’ve played.

Gamezebo tip: If you like marble poppers, try Luxor 3, Camelia’s Locket, and Stoneloops! of Jurassica.