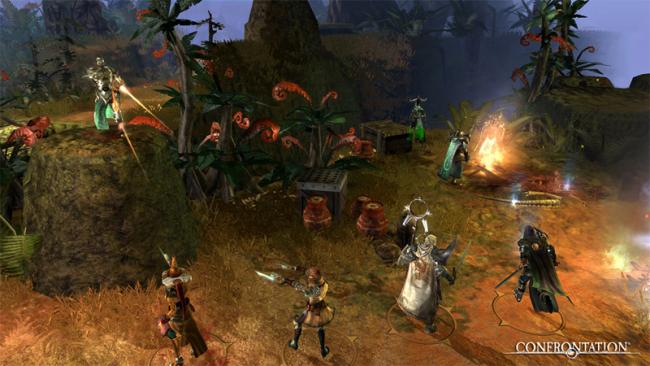 There are all kinds of tabletop games nowadays, and all kinds of gamers who play them. You’ve got your deck-builders who pour over their Magic cards, constantly trying to build the perfect deck. You’ve got your D&D groups spending hours on backstory and building dungeons that might get completely passed over. Then you’ve got your folks who are into the painted miniature scene.

While as dedicated and obsessed as anyone in any other hobby, these gamers take it to a whole different level of commitment. Taking painstaking measures to make sure their army is precisely the way it should be, they take their squads to the tabletop, engaging in epic battles that would make Peter Jackson swoon. Translating these games to an interactive digital format is a challenging task, and Cyanide Studio decided to try their hand at adapting Confrontation for the personal computer. How’d they fare? Let’s take a look.

If you’re unfamiliar with the old BioWare Infinity Engine games, then there’s a good possibility that Confrontation will seem totally brand new to you. The Dragon Age series updated the idea a bit, but Confrontation has based itself on combining the turn-based RTS/RPG hybrid format with the thought process of approaching MMO group role-based combat. You’ll take a tank, healer, DPS-dealer and ranged unit into battle against groups of enemies. Hitting space bar pauses the action and allows you to cue-up a series of actions for each of your party members against the various targets. It’s an old formula that still holds up well in modern games, as planning, executing and adjusting your attack can prove to be tremendous fun.

There’s loot to be had, levels to be gained, skills to learn and lots of enemies to slay along the way. Your party members advance independently of one another, but as they usually fight almost as a single unit they never really stray too far ahead. Of course there’s still a bit of micromanaging to be done, but it’s never anything that is tedious or unexpected in this style of game.

Confrontation‘s biggest misstep is its story. Unless you’ve become deeply immersed in the tabletop game and are already familiar, you’ll have a very tough time keeping up with what’s going on because the names for everything are overly convoluted. I tried my best, but could never keep anything straight concerning who was who, what this is place called, and why are these things fighting. It’s not that they don’t tell you, but I just got worn out trying to keep up with their made-up naming convention. 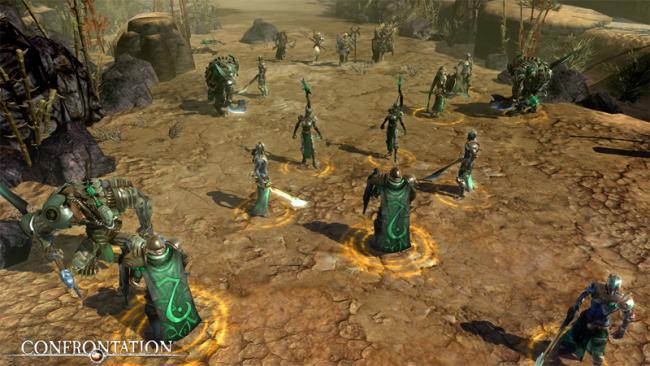 The graphics engine is not going to light your world on fire either. During the cut scenes the character models and textures might have looked pretty good about eight years ago, but not so much today. Luckily for Confrontation, most of the game is played from a fairly pulled-back perspective and you don’t get too close to things. Fairly nice particle effects on the spells and other actions do come off well, making it not a complete bummer.

I wasn’t entirely sure what to expect from Confrontation. I was not familiar with the miniatures game and the trailer made it look like it might be a third person character action RPG. After realizing that it was and old-school style turn-based RTS/RPG style game, I grew to like how it pulled things off quite a bit more. That said, I’m not sure they do enough to advance the genre, but what is there is a perfectly enjoyable game that the player can get some good hours out of. If there’s an Infinity Engine-shaped hole in your heart, than Confrontation may very well be able to fill it.