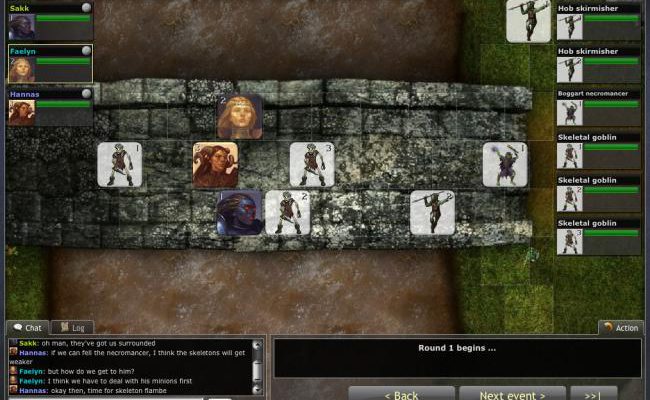 In our always-connected digital age, not many of us have the time to sit down for a vintage role-playing session like we did in our youth (my youth, anyway). The guys at 10×10 Room have come up with a novel way to meet us halfway with Conclave, a browser-based fantasy RPG that can be played live with other gamers or by turns whenever you have time. It’s like pen-and-paper brought into the 21st Century.

Imagination is mandatory in Conclave, since you’ll be exploring the world of the Kin primarily by reading. Thankfully, the descriptions of your surroundings are written with a level of detail that would put most Dungeon Masters to shame.

The five races of the Kin are looking to you and like-minded individuals to help them push back the forces that have caused them to withdraw to the titular Conclave, as the wider world has been overrun by dangerous monsters and dark magic. A selection of five classes awaits, creatively named but corresponding to some pretty standard RPG roles: melee fighters, magic users, rogues, etc.

Venturing out into the world can be done solo or with as many as three other allies. Here’s where Conclave has happened upon a winning idea, because parties can adventure together in real time or with each player taking their actions in turn. When it’s your turn to act, you’ll receive an email notification advising you of that fact. And since the game is played in a browser, it’s a cinch to get in some quick role-playing action anywhere you have internet access. Even at work, or so I’m told.

As proof that even fantastical beings realized the power of democracy, all decisions posed to the party during quests are resolved by taking a vote. That makes them feel sort of like a group Choose Your Own Adventure book, encouraging replay to find out where other paths could have led. Some options aren’t available unless your party has certain attributes or skills at the proper level, so a good mix of classes is helpful.

This being a fantasy RPG and all, most of the decisions end in fights against monsters of some kind. Conclave throws an interesting twist when it comes to combat, which takes place on tiles and has a very tactical feel. Every player and monster acts in turn, receiving both a minor and major action. Every class has attacks, buffs and debuffs and the like, some of which are limited to one or two uses per battle. 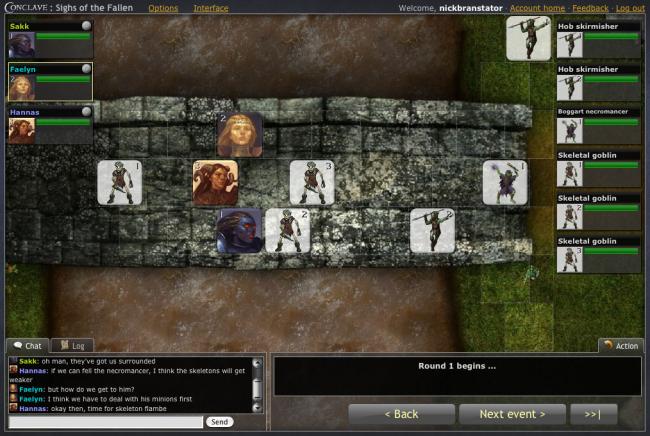 It can be dull at times, but it’s interesting how strategies from real time RPGs can be successfully put to use. For instance, I used a True Bow – an archer who is weak in melee combat – while reviewing the game and found that I could kite enemies just like in World of Warcraft thanks to my Running Shot ability. If playing live with others, a chat window at the bottom of the screen ensures you can coordinate your actions.

Completing quests earns you increased attributes, new abilities and better weapons. There are no XP in Conclave, and you simply level up after completing the correct number of quests. You also won’t find any kind of currency or stores, making the entire reward system feel somewhat random. Early adopters obviously have told 10×10 that they want more loot, and the developers have already promised that they are working on it.

The prologue to the game is free to play and consists of three missions, which can be handled solo if necessary and get your character to level 3. A pack of 10 additional quests makes up Chapter 1 of the overall story and costs $7.99.

It’s hard to think that anyone who grew up on Dungeons & Dragons won’t immediately have warm memories flood back while trying Conclave. The lack of graphics may prove to be a non-starter for some, and the ideas are still ahead of the execution in some areas. The overall concept is solid, though, and 10×10 Room deserves a lot of props for devising an elegant way to give pen-and-paper role-playing a digital makeover.