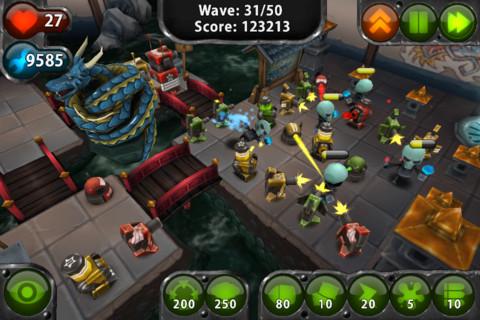 Fight on the front lines in Commando Jack: a unique tower defense/FPS hybrid

We are not alone. At least physically. I can’t really speak to how you’re doing on an emotional level, but hang in there. While there is no undeniable evidence of extraterrestrial life, it’s hard to imagine that there’s not some form of life out there. I’m not here to start conspiracy theories or distribute tin foil hats, but I do think Chillingo’s latest tower defense release, Commando Jack, is a cautionary tale. If there are aliens out there, odds are pretty 50/50 on how they’ll approach our civilization. It’s about the same chance you take on a new mobile game. So does Commando Jack come in peace to your portable device, or is it a plan for a hostile takeover of your free time?

In the world of Commando Jack, aliens from Mars have made contact and have no intention of playing nice. The earth is little more than a target for these less-than-friendly E.T.’s, and they plan on destroying the planet. It’s a plot that upsets environmentalists, but because most of them are pacifists it’s up to the society’s hero and potential savior, Commando Jack.

So how does Commando Jack go about fighting off this unwelcome invasion? Why, through tower defense of course! It’s all the rage lately, and it seems to be the best way available to fend off waves of other-worldly weirdos. In typical tower defense fashion, you’ll strategically place turrets and weapons to act as a line of defense against your enemies.

But what sets apart this game from being just another tower title is the addition of a first person element. That’s right, get yourself behind the crosshairs of a high-powered weapon and blast away all the baddies as the barrel through barriers. If you’ve got a little extra fire power that you want to take care of with some specific spot firing, or if you just find it really rewarding to grab hold a gun and fire at will, the first person action adds a whole new way to protect your location.

Whether you’re watching from above or wielding weaponry yourself, every kill you add to your count with also add to your currency. As far as I can tell, the aliens aren’t actually made of money, but they do seem to spew out monetary rewards when they die. There’s no real reason to question the feasibility of this, because you get the money and it’ll come in handy in building up your defenses.

Upgrades to both the tower turrets and the first person fire power will allow you to power through waves faster than ever. It’s especially fun managing the FPS weaponry because it gives you the ability to release rounds from machine guns, fire out fire with a flamethrower, or reap explosive rewards from a rocket launcher.

All of the action will take place across five locales that will have you fighting alongside local infantry to finish off the invasion. Unfortunately the city that you’re in doesn’t make a huge difference save from the visual aesthetic, and there really aren’t a lot of places to play. The alien units appear in every area, popping up in different rotations but looking pretty much the same. Luckily both the alien enemies and the locations of battle look good and maintain a very fitting old-fashioned sci-fi aesthetic. The audio matches the images on screen to round out the game’s well executed presentation.

It’s hard to not get sick of tower defense titles. They are in abundance on the App Store and it feels a bit like a tower defense game just to fight them away from your mobile device’s hard drive. But if you’ve got some room, fill it up with Commando Jack. It maintains some excellent tower defense action while adding a new aspect that keeps things interesting enough to deserve attention. It’s enough familiarity mixed with some freshness that is definitely worth experiencing.