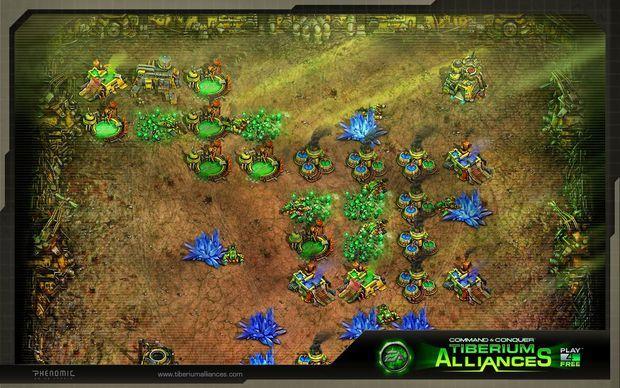 While the console gaming scene has fast become the domain of blockbuster-style action romps, social gaming platforms have seen a renaissance of the strategy genre. Never one to miss the bandwagon, Electronic Arts (EA) has readied its flagship tactical franchise for the freemium market, and we’re delighted to report that Command & Conquer: Tiberium Alliances wins another victory for fans of more methodical gameplay.

Neophyte strategy gamers will likely be more familiar with the Red Alert strain of Command & Conquer, with its tongue-in-cheek banter and flamboyant characters. However, Tiberium Alliances is a return to the series’ roots, pitting the Global Defense Initiative against the radical Brotherhood of Nod. Story takes a backseat to gameplay, though, and an excellent tutorial system allows players to progress at their own pace.

There is a fundamental difference to be found in Tiberium Alliancesfrom the games of yore: it truly isn’t a real-time-strategy (RTS) game. Though Command & Conquer can arguably be considered the granddaddy of the genre, Tiberium Alliancestakes many of the series’ most prolific elements and compartmentalizes them in a way that will be all too familiar to social gamers. Like games such as The Stratagems, the focus here is building up an empire and aligning yourself with other factions (other real players).

At the outset, progression in Tiberium Alliances moves at a steady clip, but you will eventually be required to let your tiberium (the game’s main resource) catch up to your need for continued development. Luckily, these moments of strategic slowdown tend to present themselves as welcome breaks from the game, and you’ll never have to wait long to jump back in the fray.

Combat is very straightforward – literally. You’ll place units in rows, and when it’s time to initiate your attack, units simply march along a set path without player control. As simple as this approach may seem, battles actually make an intelligent fit for the game’s overall focus. Strategy is always at the forefront, and Tiberium Alliances trades the need for quick reflexes for a more careful gaming style. 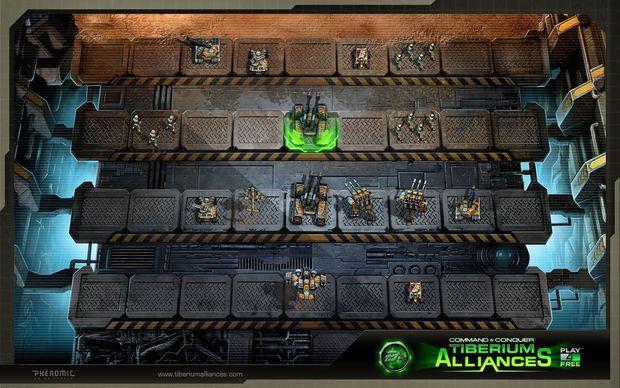 Visually, the game isn’t pushing any boundaries, but the presentation is smart and attractive. There’s a lot going on and a surprising amount of gameplay depth, yet menus don’t feel cluttered or daunting. Background music is dramatic and powerful, and the sound effects that accompany clicking and combat make a satisfying addition to the complete package.

Command & Conquer: Tiberium Alliances starts out – like many strategy games do – a little dry and a little slow. But once the game lets go of the reins and gives you predominant command, Tiberium Alliances is a very satisfying experience filled with variety and challenge. The social components and presentation aren’t cutting edge, but the game sets itself apart with cool gameplay features that make this one of the most well-rounded tactical adventures available to social gamers.