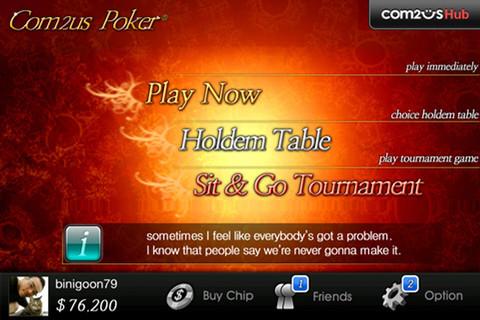 Com2uS certainly knows its way around mobile games, but how does the Korean company’s skill at making tower defense titles translate to the world of Texas Hold ‘Em? Not too badly, as it turns out. Com2uS Poker is a slickly designed free poker iOS app that makes it easy for players to hit the felt while on the go.

Getting started in Com2uS Poker is simple, requiring just a few minutes to create a new Com2uS account or log in to an existing one. The game starts out newbies with $50,000 in play chips, and increasing amounts of bonus chips get added to your bankroll each day you fire up the app.

A classy sounding piano theme greets you in the main lobby, where a single tap gets you a seat at a random active table. If you’d rather pick your card game, the offerings include five and nine-handed ring games with blind structures from $1/$2 all the way to a $1 million/$2 million table that would probably even give Phil Ivy pause – except he’d want to play for real money.

Single table Sit & Go tournaments can also be entered for a wide range of buy-ins, beginning as soon as the table is full. Wait times can vary, and while it’s nice that the game makes it so easy to sit down with a minimum of fuss, it would be nice to see which tournaments already have other interested players so you’d know how long it would be until the cards were in the air.

The actual gameplay is smooth thanks to a clean interface. Options to check, call, or raise are aligned across the bottom of the screen, and can be queued up ahead of time if desired like in most poker sims. Bets can be sized using a slider that pops up on the right-hand side of the screen. The Help menu includes a visual guide to anything you might find confusing, though the game assumes players already know the basics of Hold ‘Em.

Social features are about what you’d expect. Other players can be added to your Friend List, where you can send them messages or gifts of free chips. A search function can help you quickly find someone specific if you know thier Com2uS username.

One feature conspicuously absent is a chat window. The ability to talk trash or simply question other players’ sanity is pretty much a staple of online poker games, and one assumes that the trickiness in implementing it on touchscreens is why it’s nowhere to be found here. 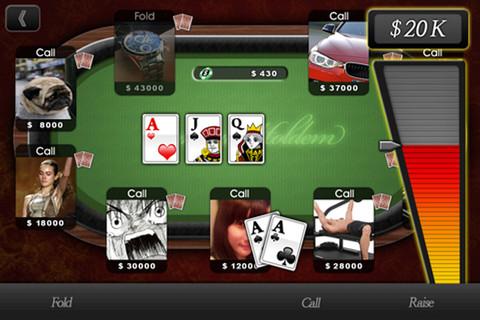 On the plus side, it’s a relief that the game is so basic and uncluttered. It would have been easy for Com2uS to cram in advertising, but at least for now, it seems the company is content to make money from the sale of chips, which can be purchased for real money with just a few taps and a confirmation.

Plenty of poker games try to dazzle with all the game modes and features they can cram in. That’s great for hardcore players, but for anyone who would just like a casual game of poker with other like-minded people, sometimes less is more. Com2uS Poker pulls that off nicely, and the fact that it’s free is the icing on the cake.