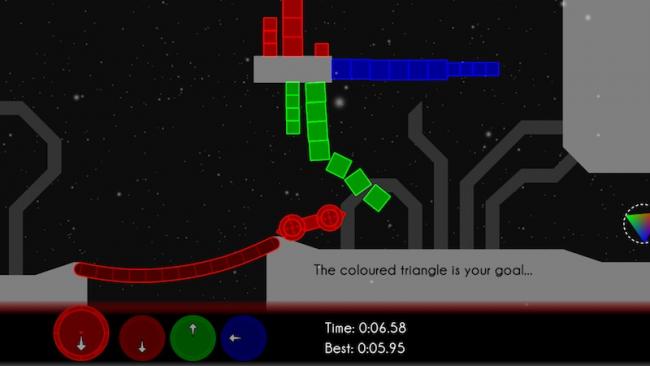 The colour of frustration

Gravity, as we all know, is the magical force that keeps us held firmly to the surface of our lovely planet Earth. But imagine if gravity’s effect was dependent upon color: a deep red hue may hold your feet to the ground, but turning blue could launch you toward the ceiling; going green could see you flung to the left or right, and if you turn purple, well, then you’re really in trouble. That’s the premise in Colour Bind, a brilliantly torturous 2D puzzle-platformer that will have you bouncing off walls and spinning around in circles, both literally and figuratively.

Objects in Colour Bind (and yes, “Colour,” not Color – the game’s author is Australian), including the vaguely dune buggy-like vehicle used to navigate its two-dimensional world, fall in different directions and at different speeds depending upon what color they are and how strongly the gravity flows in any given direction. Objects can change color, changing how gravity affects them, and the direction of gravitational pull can be changed as well. The name of the game is simply to drive your vehicle to a predetermined location – a classic case of easier said than done.

That variable gravity, of course, is what makes it a challenge. In an instant, up becomes down, left is made right and relaxation turns into raging frustration as you struggle not just to figure out how to beat each of the game’s more than 50 single-player levels, but also to actually put your solution into action. It’s not good enough to be smart – you’ll need to be equally fleet of finger if you want to beat this game. (And in case that’s not enough to keep you busy, Colour Bind also includes 20 two-player co-op levels and a full-blown level editor, allowing people to create and share their own diabolical designs. You could be at this for awhile.)

The good news is that the controls are very simple: You can move left and right, jump into the air and lock your brakes to hold yourself in position. Everything else is dependent upon interacting with the level. Button switches, used to open doors or change the flow of gravity, are pushed by driving into them, while passing through colored beams changes the color of your vehicle and thus how it interacts with the world. Everything is done with the keyboard, although Colour Bind’s menus can also be navigated with a mouse.

It’s not an especially eye-catching game, with functional but otherwise unremarkable geometric visuals that remind me of nothing so much as the vector-based arcade machines of old, like Tempest or Omega Race, but with more color. The procedurally-generated soundtrack is much more interesting, as the game blends four distinct, color-based music tracks on the fly to create some very nice and appropriately soothing background audio. But what it lacks in eye candy, it more than makes up in sheer, uncompromising difficulty.

The Colour Bind website warns, “This game is hard,” and the developer stated in a promotional video that he wants players to “still be facing new challenges no matter how good they get at it.” He’s not kidding. Each level has time targets of bronze, silver and gold, and unlike many games, even achieving bronze is a challenge. The 14th level, for instance, awards a bronze medal at 65 seconds; the last time I tried it, I was still trying to get my time under two minutes. 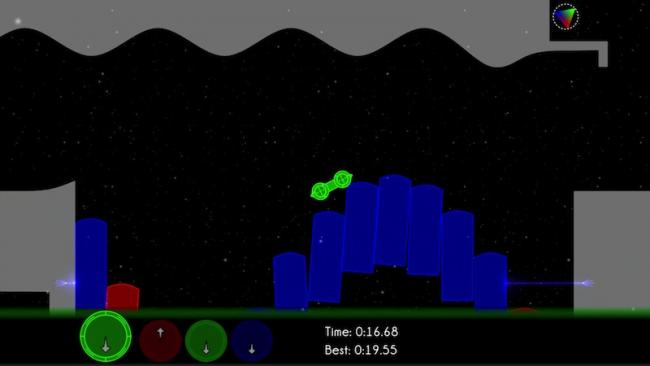 My only complaints about the game, aside from the fact that it’s driving me crazy, are rather nit-picky. The triangle-shaped mouse pointer is nice to look at but isn’t particularly accurate as a pointer. More annoying is that the level selection menu starts at the very first level every time you launch the game, forcing you to scroll through the full list to get to where you left off – and it doesn’t do a very good job of indicating where that point is. It would make far more sense to start each session at the last-completed level.

Those are matters of minor detail, however, and in the end Colour Bind does what it does very well indeed. Whether what it does is something you want to subject yourself to is another matter entirely, but if it is – which is to say, if you’re a serious fan of devious puzzle games that are equal parts thoughtfulness and dexterity – then brace yourself and jump in. You won’t be disappointed.