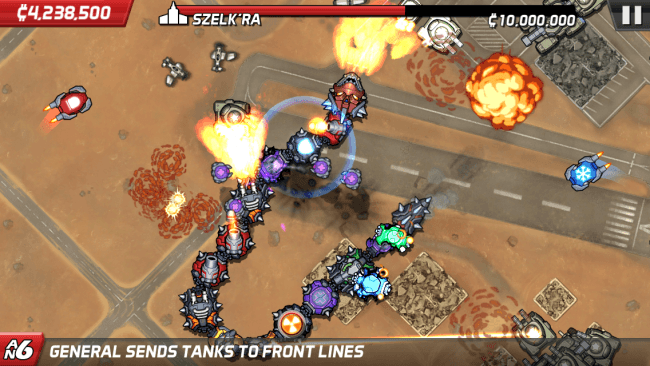 A monstrously original twist on match-3

If they ever add the world Halfbrick to the dictionary, I’m pretty sure the definition will read “guaranteed mobile gold.” After all, we’ve come to expect nothing less from the house that Fruit Ninja and Jetpack Joyride built. Their latest offering Colossatron puts players in control of an interstellar space monster with a snake-like body out to destroy every city on Earth.

Your initial guess – especially based on the term “snake-like body” – might be that this is Halfbrick’s attempt to update the old school Nokia-era classic Snake. And if that’s not your guess, you might think that it’s an action game full of rampaging and smashing. But believe it or not – and if you’re looking at the screenshots, we’ll understand if it’s not – Colossatron is a wholly original twist on match-3.

Rather than controlling the titular Colossatron directly, you’ll be building out his long snake-like body by dragging different colored modules into place. Each module is a different weapon that Colossatron will use in his rampage, and combining three or more like-colored modules will level it up into a stronger version of the same weapon. You’ll also be able to match primary colors to create new modules that aren’t otherwise available (blue and yellow make green, for example).

And… that’s it. As you progress through the game you’ll unlock “gadgets” that will power up Colossatron in some helpful ways – increasing his attack strength, letting you guide him to a specific location for a special attack, letting you swap out modules on the fly – but ultimately the game is really just about dragging and combining these different modules onto the beast.

The simple gameplay is largely contrasted by the frantic happenings that are out of your control on the screen. Hordes of tanks and bombers will flood your field of view, and if this were a game where you controlled the action directly, you’d probably think all was lost. But in Colossatron you’re really just the mechanic who swaps new parts in as the snake monster rampages. So while it may look and feel frantic, the worst that happens is you’ll lose modules at a faster rate than you would have otherwise. 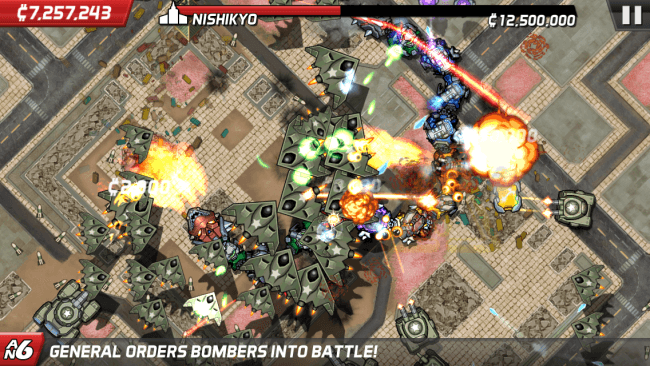 A crazy screen does amp up the difficulty in another way, though not necessarily one we liked. If bombers are blocking your view, it can be all too easy to miss a new module that enters the screen or to misplace one that you manage to grab. This feels like a design choice rather than an oversight on their part. I didn’t care for it, but YMMV.

Still, Colossatron can be good fun – especially by the end when you’ve unlocked all of the gadget options. It delivers that same satisfaction you get from finding a perfect match in Candy Crush, but in a completely different way. It’s not likely to have the long term appeal of the more popular games in the Halfbrick library, but if you’re looking for a different twist on color matching fun, Colossatron is a monster that’s well worth keeping in your pocket.