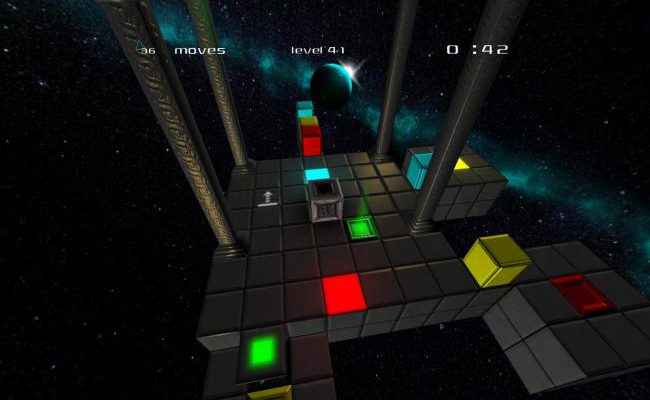 It’s with a hint of irony that the humble puzzler seems to be the one genre that has taken to 3D with the most ease. While Sonic and co. might spend their time running into walls thanks to the extra dimension, and players the world over regularly get confused and fire upon their teammates in shooter after shooter, titles like ColorCube make adapting to 3D gaming look a breeze.

In fact, it’s fair to say ColorCube could only exist in 3D form, it’s fully dimensional floating grid based stages increasingly getting more elaborate as the levels pass.

At its heart, however, is a simple lock and key set-up, where successfully traversing its maze like levels is a question of giving each move you make careful thought. 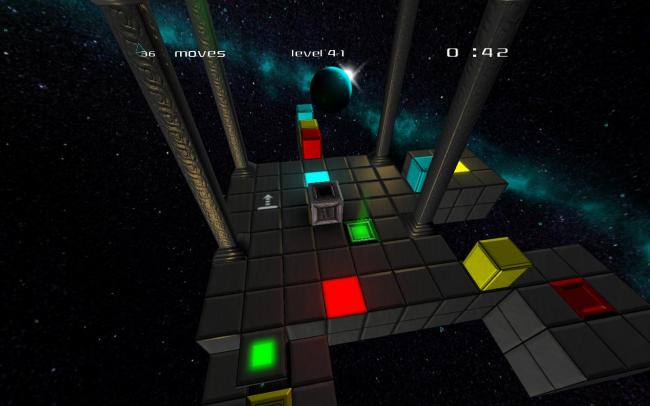 At a very basic level, each stage on offer – and there are 42 to tackle by default – charges you with using the directional keys on your keyboard to guide a cube through to an exit, marked by a series of arrows.

In your way, however, are what amount to a series of locked gateways – colored cubes blocking your path. Unlocking each obstacle is a matter of guiding your cube across a similarly colored grid square that leaves its mark on whatever side of your cube it comes into contact with. The idea is to then press this painted side down on a button – usually located elsewhere on the map, but bearing the same shade.

The problem, of course, is that as you tip your cube around, you’re liable to press the recently painted side down on the floor. Doing so wipes it clean, meaning you have to retrace your steps, plant the cube down on the colored grid square, and set off again on the same mission.

In essence, this means nifty navigation soon becomes a necessity. Managing to guide your cube around the grid based levels without planting one particular side on its surface – or, it’s worth mentioning, on its walls, either – is no easy task, and with ColorCube counting each move you make and setting you off against a ticking clock, the pressure is certainly on from the start. 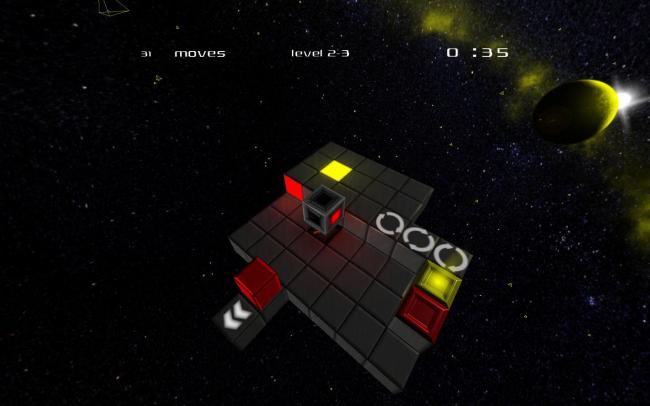 To its credit, however, ColorCube manages to temper what later becomes a considerable challenge by introducing each new element one at a time. After the first batch of levels – where red is the only color you have to deal with – the following assortment throws yellow into the equation, with completely stages a question of taking on two gateways, usually in a predefined order.

Add to this other interactive elements – grid squares that rotate your cube by 90 degrees, for instance – and a series of additional colors, and you have the classic combination of a game that’s easy to comprehend but difficult to conquer.

Those who find it a touch too tricky can have a crack at serving up their own stages, however. Rather shrewdly, ColorCube comes with an editor mode that hands you the keys to the castle and lets you both create and test your own wares. It is a little difficult to fathom, in truth, and would be better served by some sort of tutorial, but it does open the doors to a world of additional levels.

Indeed, ColorCube has slots to let you save user-created stages downloaded from the internet, though just where such levels can be picked up from as of yet remains to be seen.

Either way, there’s certainly challenge enough in the levels ColorCube serves up of its own accord. Balancing out the need for complexity with the prudence required to keep people on board, the game’s grid-based play is one quandary it’s worth finding the key for.