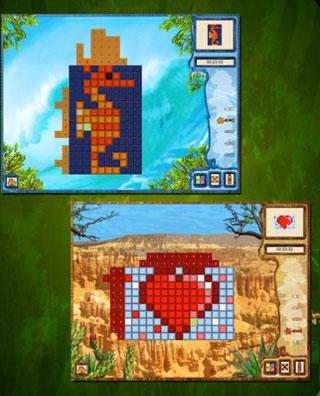 ColorCross will find a home with a niche audience, but doesn’t do enough to attract the unfamiliar.

While Sudoku may be the current king of most newspapers, I’ve always had a soft spot for nonogram logic puzzles like those found in the game of Picross, and now, ColorCross. Like Sudoku, nonogram puzzles take place on a grid, but rather than tasking you with placing numbers in each square, you’re instead filling each box with a different color, to create a larger, pixelated image when all is said and done. Unfortunately for ColorCross however, there just isn’t enough here to recommend anyone new to the genre to try it.

ColorCross’s animal theme sees you traveling through the various continents, starting with North America. Your overall goal is to complete enough puzzles to uncover a larger, National Geographic inspired photograph of an animal (in North America’s case – the Bald Eagle), and you can then move onto the next continent.

Each level of the game presents you with a different grid. For the unfamiliar or simply untrained, the rules of ColorCross can come off as a bit confusing. Unfortunately, you aren’t forced through the tutorial here, so you’ll need to manually read over the rules before you begin if you think you’ll need help.

While hard to explain, the gameplay of ColorCross is easy to pickup with practice. For a well-known example, let’s say our puzzle had us building the American Flag. You might see the numbers 1, 1, 1 next to the top Row, when looking to use the color White, and also while using Blue. This would tell you that that particular row has three total Blue and White squares each, and that there must be at least one space between each colored block in another shade. In our example, this would account for the stars in the flag and the blue background (like I said, it’s more confusing on paper than it is in practice).

For those that are new to the system, ColorCross’s lack of extremely easy puzzles might throw you off. Even for an experienced played such as myself, I was taken aback by how quickly the puzzles went from 5×5 to 15×10 and beyond, all within the first North American section. Furthermore, this difficulty is only compacted by some of the more questionable designs you’ll build. While some, like flamingos, seagulls, and a panda’s paw are easy to pick out as you’re playing, there are others that still have me scratching my head trying to decipher. The puzzle may be complete, but the picture is still a mystery, which is disappointing to say the least.

In addition to the game’s Classic mode described above (which is technically timed, but only for your own bragging rights, and to keep track of your incorrect moves), there’s an Arcade mode, which presents more of the same gameplay, but in a less-themed, and more random format. You’ll find yourself creating various plaid patterns, for instance, while being timed. If you can’t complete the level before time runs out, you’ll have to start again.

All told, if you know exactly how the game of Picross is played, and would be comfortable jumping into what I’d consider a moderate difficulty from the start, then ColorCross’s ample level set will keep you playing for hours on end. However, the nonogram puzzle system isn’t for everyone, and with a lack of extra features or in-game help, it’s unlikely that this will satisfy the curiosity of the beginner before they simply quit from frustration.