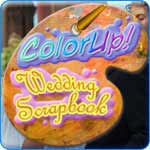 Fiona’s budding photography career gets a big break when she’s asked to photograph her best friend Gwen’s wedding. But after a mystery culprit breaks into Fiona’s studio and trashes her work, Fiona must put together a replacement wedding scrapbook by recreating the photographs through paint-by-numbers puzzle challenges. It’s all part of Color Up! Wedding Scrapbook, a relaxing game designed to bring out your inner artist.

The truly talented artists among us paint, while the not-so-talented (but equally enthusiastic) do what’s called paint-by-numbers. In a nutshell, it means painting each numbered section of a specially-labelled canvas with the corresponding paint color, which has also been assigned a number. By matching numbers (i.e. painting all of the "4" sections on the canvas with the #4 paint), an image will eventually take shape.

In Color Up!, the idea is similar. You’ll get a colorless image divided into numbered sections in black outlines, as well as a palette of numbered paints of various colors. By dipping your paint brush in the paint and then applying it to the canvas, you can fill in sections of the image – as long as the numbers match.

The game is more than just filling in canvases, however. In Bend Your Brain mode you have a limited number of moves to complete the canvas, which is where you’ll need to use advanced strategies like "fencing" (painting around a section so that the middle automatically fills in), and using the splatter and roller power-ups.

The splatter power-up, when activated by filling in all of the sections around it, sends splatters of paint in all directions to fill nearby segments. There’s also a paint roller power-up, which rolls across the canvas in a straight line filling in all segments in its path.

The game awards a gold star if you manage to fill in the entire canvas in a certain number of moves or less. This adds replay value to the game in that people can go back and try to get all of the gold stars in a level on top of simply completing the canvases.

For players who are stressed out by move limits and just want to paint, there’s also a Relax mode where you can take as many moves as you wish to complete a canvas with a never-ending supply of paint – more or less. Youan still run out of moves and lose points for it, but your palette gets replenished with new paint. Sometimes, however, the paint is not enough to finish and you have to go through the same rigmarole multiple times. Relax mode perhaps would have worked better if it was truly "relaxing," – as in, no score-keeping, as much paint as you could possibly use, and no power-ups or bonus multipliers to get in the way.

Both modes have time limits, but only for scoring purposes. Once time runs out you can still keep playing – you just won’t get any bonus points at the end of the round.

Fiona has a pleasant "girl next door" voice as she narrates each picture in the scrapbook, letting readers follow along with the story of how Gwen and Doug met, through to their courtship and the events of the Big Day itself. At 53 levels, however, I found the story dragging a bit. Maybe I was hoping for less lovey dovey stuff and more mystery.

I was itching to get to the bottom of who trashed Fiona’s studio, but it’s only on level 47, "Deceit and Devastation," that the plot finally thickens. But maybe that’s just because I’ve played one too many hidden object mystery game. People with a romantic streak will likely eat the story up, along with the lush, colorful pictures of the happy – and very attractive – couple.

All-in-all, Color Up! Wedding Scrapbook provides a unique experience that combines paint-by-numbers with a surprisingly deep level of strategy and a story that, while it drags in places, is undeniably heart-warming.