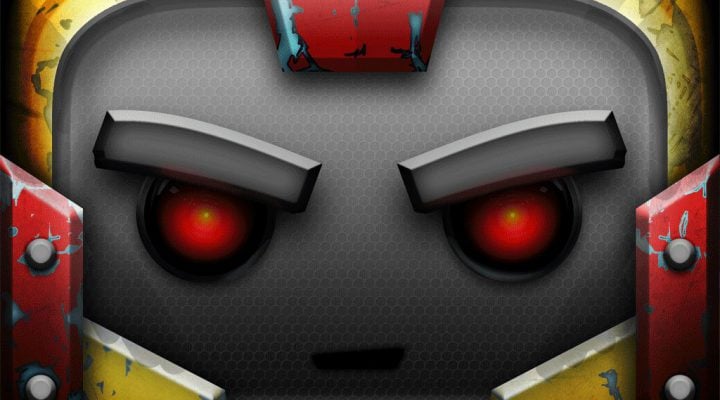 An interesting twist on an old formula.

Boss battles drag on a little.

Control scheme occasionally lets you down.

Color Bots isn’t just another standard lane defense game. It mixes together elements from a bunch of different genres to create something a little bit special. There are pieces here from some classic games, all presented in a unique and interesting way.

Sure you’re just shooting alien invaders, and if you think about it that’s a good chunk of what we’ve been doing for the last 40-odd years. But it’s still nice to see a different take on one of the oldest ideas in gaming, especially when it’s as well implemented as it is here. There are a few niggles here and there, especially when it comes to the boss battles that the game chucks in your direction, but they’re not quite enough to put you off from sinking your teeth into the hue-swapping game of alien destruction. 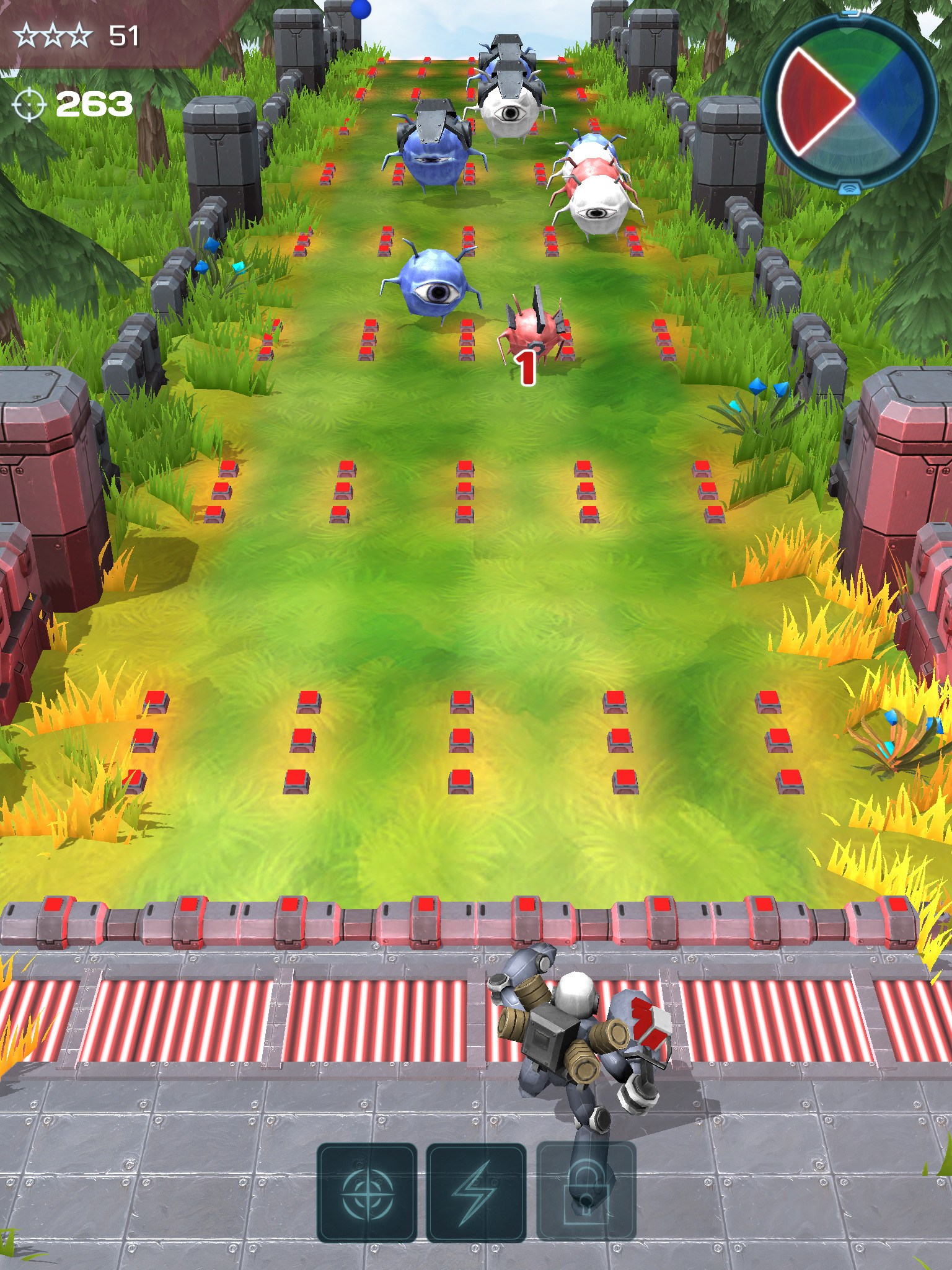 You play a robot who’s stood at the bottom of the screen. From the top, a bunch of aliens are encroaching on your personal space in a horribly negative way. It’s up to you to shoot them to death before they pass your defenses and deal you some damage.

Shooting involves tapping on one of the four lanes that the invaders are cascading down. But the twist is that the aliens can be one of four different colors. Hit an alien with a shot of the wrong hue and not only do you lose your combo, they’ll speed up and charge towards you. The four colors in the game are arranged in a wheel that’s split into four quarters. Swiping up, left, down or right changes your weapon to the color that’s associated with that direction. You’ll also get a few visual cues on the level to let you know which one you’ve currently got selected.

The color swapping makes everything that little bit more frantic. It’s rare that you’ll take a beating in the early levels, but you might mess up your combo. And that combo lasts between stages, so you can build it up to enormous levels and get some big rewards if you’re playing well enough.

Problems start to creep in when you fight the bosses though. These hulking ships hang out at the very back of the screen. It doesn’t matter what color beams you hit them with, but you’ve also got waves of wandering enemies to deal with. The game loses a lot of its snap in these sections, and the levels start to drag a little. It’s not the end of the world, but rather than the slightly manic exertions of the non-boss levels, here you feel like you’re in a war of attrition, and it’s at odds with the rest of the experience you’ve been having. 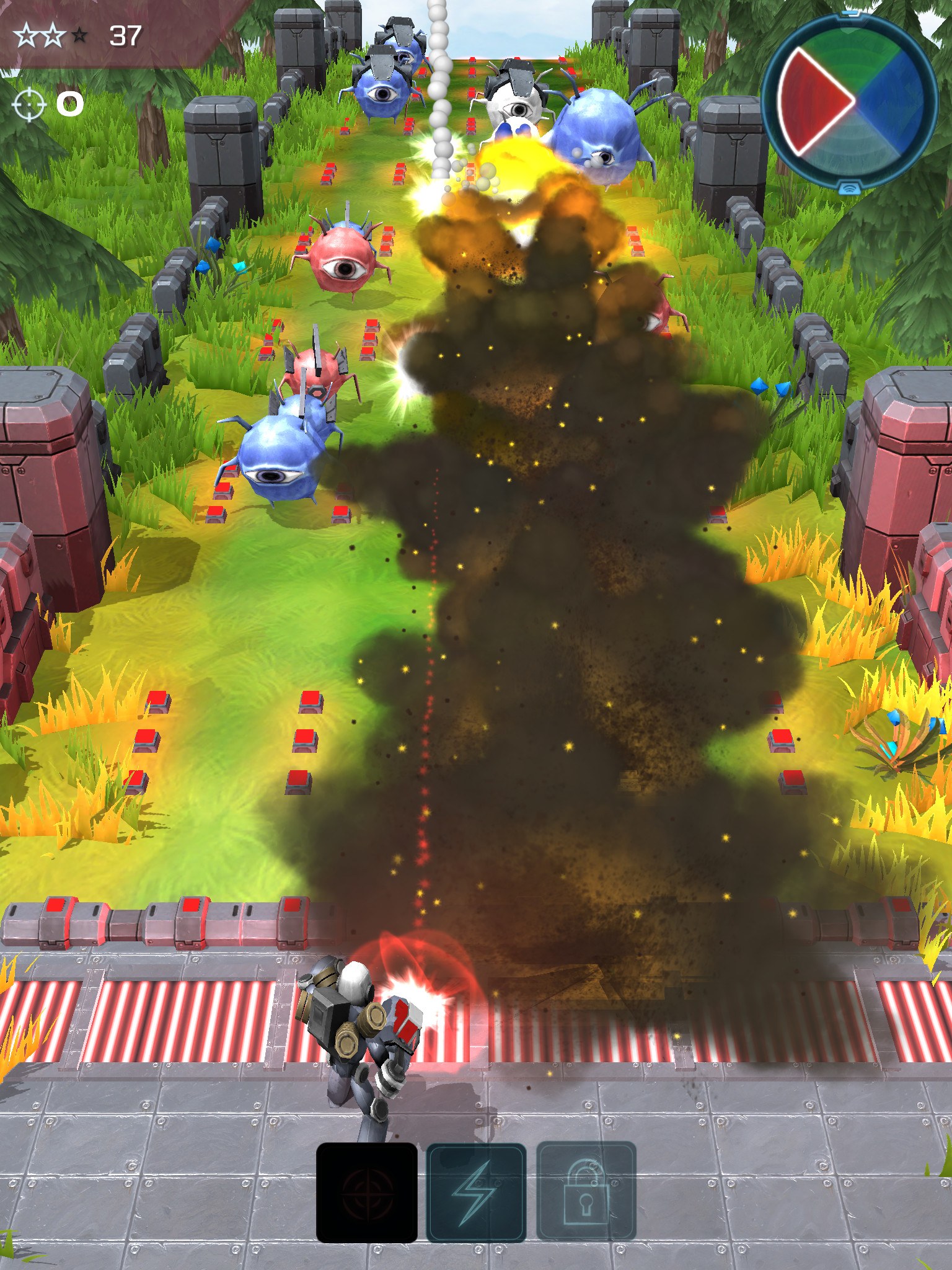 It’s a shame that Color Bots gets a little tarnished by these chunks of play, because when it gets things right it’s a really entertaining and, more importantly, different shooter. Getting to grips with its ideas is a lot of fun, and you feel like you’ve achieved something when you’re taking on waves comprised of all four colors at once.

If you’re looking for a game that doesn’t play by the same old rules, or you just fancy seeing a different take on the Space Invaders template for a more discerning modern audience, then this one is well worth picking up. Just be aware that there are going to be times when you’re gnashing your teeth trying to get through some more stodgy sections. But find your way past them, and the fun comes back in spades.