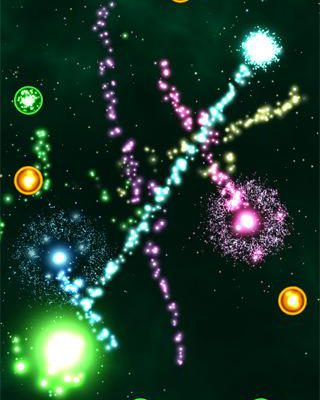 For puzzle fans of any kind, arcade or cerebral, Collision Effect simply can’t be missed.

So how good is Collision Effect? Let me put it this way: I review a lot of iPhone games – far more than my phone can hope to hold. The ones that aren’t deleted – the ones in my permanent collection on my iPhone, rather than backed up in iTunes then wiped off the phone’s memory – are few but special. Collision Effect just joined that list.

Like the best puzzle games, the idea is simple. Colored orbs float onto the playfield. If you touch one, all the like-colored orbs start flying towards it in the straightest line possible. If they touch a different colored orb, it’s game over.

That’s it. Collision Effect‘s strongest point is that it’s a simple idea that can be mined as deeply as you’d like to go. Sure, you can just touch one and let them fly, but if you’re really good, you can touch one of the sailing orbs and make the other ones come to it instead. The re-direction comes in handy once you get good enough.

Collision Effect features two modes, an Action Mode and Puzzle Mode. Action Mode has wave after wave of flying orbs to clear, featuring three difficulty levels. In this mode you’ll also get special items that will slow down time, allowing you more time to set up bigger chain combos for higher points, a smart bomb item, or even one that prevents all collisions, thereby allowing you to rack up some serious points. When you lose, the game will upload your high score to either the Game Center or Crystal leaderboards, and you’ll probably unlock some achievements along the way, too.

Because of its simplicity, Collision Effect has that great addictive quality that keeps you coming back for more. Almost every collision is avoidable, and you’ll know what went wrong because the game highlights the collision for you to see. In later waves, even once you’ve got a good groove going, you’ll miss that one orb, see what you missed, curse yourself, and be compelled to try again.

If you don’t want twitch arcade gaming, Collision Effect also has a great Puzzle Mode. Here, orbs will float onto the screen and stop. Your goal is to clear them, of course, but it’s not that simple. When you collide like-colored orbs, they don’t all disappear, but coalesce in the orb you drew them to. You’ll also have to time the orbs’ movements just right to prevent unwanted collisions. Gone are the items from Action Mode, but Collision Effect gives you three different speeds you can switch between at any time. If there are some hair-trigger small moments, you can make things move through syrup, or ramp it to full speed once you’re sure things are cleared. If you’re really stumped, Collision Effect will give you a hint as to where to start. And though the levels are locked, you unlock them piecemeal. If you’re stumped at level 15, don’t worry. If you can solve level 16, the unlockable that level 15 would have provided is released as well. You’ll want to solve all of them for the achievements, of course, but this method of not holding stages hostage because of one difficult level is a welcome reprieve from most other titles. 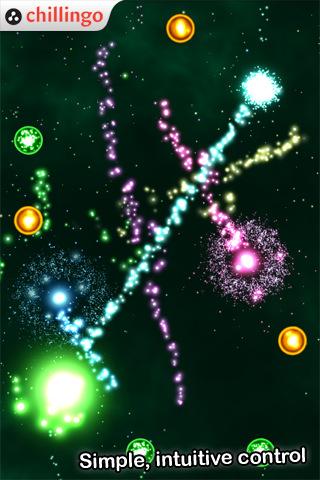 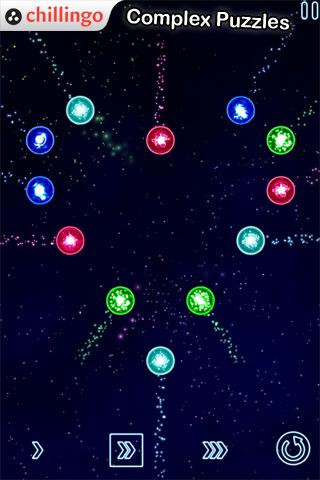 In still shots, Collision Effect doesn’t look like much. However, in motion, it’s very pretty. The sci-fi design is reminiscent of Geometry Wars, with lots of particle effects and star trails. These trails aren’t just for show. In Puzzle Mode, they can remind you of moves you tried in your previous attempt. In Action Mode, they are touchable, so they can clutter up the playfield which adds a challenge without being a nuisance. Heck, you can even swirl the star dust around on the title screen! It’s that attention to detail that you’ll likely not see the first few times you play is crucial to the presentation in Collision Effect.

In fact, other than the so-so synthesizer soundtrack and lack of additional content once you’ve completed the Puzzle Mode, Collision Effect is a really compelling game. At the risk of being repetitious, it’s because it’s so simple that it’s so complete. I’m certain that there are other ways this mechanic can be exploited, and look forward to any future content the developers wish to bring out. For puzzle fans of any kind, arcade or cerebral, Collision Effect simply can’t be missed.