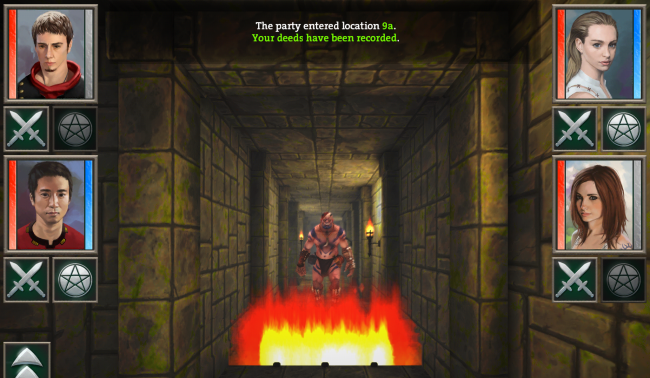 The town of Newsettle needs your help! There’s evil around every corner (careful not to step in any) and it’s up to you and your stalwart band of newbie adventurers to delve into the depths of Coldfire Keep, uncover the source of the trouble, and put an end to it once and for all!

A brief history lesson before we get going: The “dungeon crawler” is a type of first-person RPG, solo or party-based, with a focus on exploration, puzzle solving, collecting loot, and copious amounts of combat with a host of inhuman ne’er-do-wells. They were particularly popular in the 80s and early 90s, but by the mid-90s the genre had fallen out of mainstream gamer consciousness. In recent years, however, it’s enjoyed something of a resurgence, driven largely by the 2012 indie hit Legend of Grimrock. (I delivered the same sermon in the lead-in to that review too, by the way. I like to keep readers informed.)

Now along comes Coldfire Keep, and if you’ve ever wished that you could go digitally spelunking on your bus ride to work, I have good news: There are some rough edges, but in most of the ways that matter, this is a game that gets it right.

Coldfire Keep follows four inexperienced adventurers as they investigate strange happenings in the ancient castle that lies just outside of town. In fine dungeon crawler fashion, that’s the extent of the setup: Some monsters busted up the place and you’re going to look into it because nobody else will. The tale gets a little deeper as you progress through the catacombs but it’s perfunctory stuff, and the truth is that, much like climbing a mountain, you’re diving deeper into the dungeon for no better reason than because it’s there.

Your party is formed of four characters in whatever combination of fighter, rogue, caster, and shaman you prefer. Want four muscleheads who don’t think so good? Four magical superbrains who crumble under the weight of harsh language? The default party includes one of each class, but you can go with any combination you see fit, and the game is definitely balanced toward sword-swingers. There are plenty of magical weapons and armor for fighters (and, to a lesser extent, shamans and rogues), but almost nothing for casters, and the mana supply that powers their abilities burns up quickly and only recharges during sleep, which puts a real limit on their usefulness.

Coldfire Keep is turn-based with movement set on a virtual grid, another feature common in old dungeon crawlers, but it eliminates the “stick and move” combat technique (in which players hit an enemy and then move away before the enemy can retaliate) by keeping the party in place until all members have finished their attacks. You hit the enemy, he gets to hit you back, and only then can you move away. Although I found it frustrating at first, I eventually came to appreciate the greater level of caution it demanded. You can’t just dance circles around your lead-footed foes, slowly whittling them down to nothing; when you get into a fight, you’re in a fight, so you need to be a little more careful about who you pick them with.

The Keep itself and the monsters in it all look quite good, but it suffers from very repetitive level design. The walls, decorations and other environmental features are unchanging from one level to the next, so level 8D, for instance, is visually indistinguishable from level 2. There are also a relatively few number of monster types, and it comes off almost as intentional parody that you’ll spend so much of your time killing giant rats.

Controls are quite simple, in part because the game as a whole is somewhat simplified compared to its PC-based cousins. Character advancement is automatic, there are no skill or spell trees to dither over, you can’t carry torches to light the way, the environment is largely non-interactive, and you can’t jump over, or even fall into, the pit traps that occasionally turn up. It’s a slimmed-down experience designed to compensate for the limitations of a touchscreen interface, although old-timers can opt for virtual movement buttons instead of the default swipe controls. 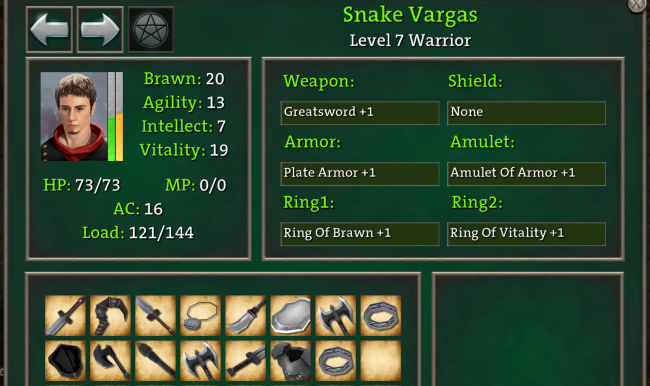 Either way, the double-tap function to pick up or interact with objects is infuriatingly spotty and often doesn’t register, so you’ll find yourself bopping the screen repeatedly in order to make things happen. It’s also a bit of a twitchy game, and will crash reliably if you tap too close to the bottom of the screen while trying to pick up a fish. (Fishing, presumably a nod to games like Fate, provides sustenance for your party and, very rarely, magical treasures.) It’s possible as well to freeze yourself in place by turning and then immediately bringing up the map before the turn is complete, although that situation is escapable by way of the teleport function.

There are other bugs, less aggravating but still obvious – the supply of arrows never depletes, and the gameplay timer is just flat-out wrong – and it can get tiresome, too, at least in large doses. There are simply too few enemies, environments, and even puzzle types to keep the action truly compelling over its entire, admittedly impressive length. By the time you’re powering through the lower levels of the Keep, the odds are good that you’ll be looking forward to wrapping things up.

But you will look forward to it, because in spite of its shortcomings, Coldfire Keep is a really nifty little dungeon crawler. It doesn’t compete with the giants of the genre, but as an introduction to the form that you can carry under your arm and play whenever you have a few minutes (or a few hours) to kill, it really should not be overlooked.