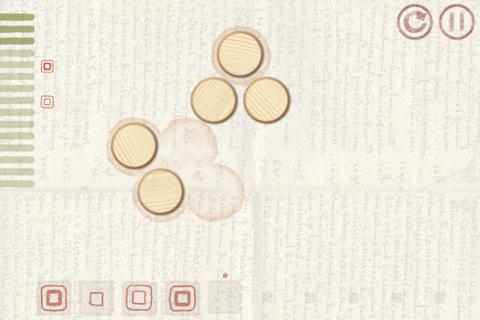 Zen and the Art of Moving Disks Around

Sometimes games can be a little too demanding for their own good, like a car with a standard transmission.  Sure it can be fun switching gears, hitting fourth at just the right second, but sometimes it’s just a pain.  Wouldn’t it be nice to simply press the gas pedal and go?  Well, this is my feeble analogy for Coins.  It is the antithesis of the standard transmission.  It is the uber-automatic.  Coins is so undemanding, that, if I were to extend my feeble analogy further yet, I might even equate it to taking a taxi.  You just sort of sit back and enjoy the ride.

Depending on your mood and your inclination as a gamer, this is a very good thing.  If you are the sort of gamer who likes to play in short spurts — the sort of gamer who is looking for a way to kill some time during your lunch hour — than Coins was made for you.  It’s an extremely simple, almost peaceful puzzle game that will stimulate your mind without frustrating you.

Here’s how it works.  Each level challenges you to arrange wooden disks into specific spaces highlighted on the playing field.  In a stylish touch, the playing field is rendered as a sheet of paper with hints of calligraphy or cartography penned onto the reverse of the sheet.  The spaces you need to fill appear as wet spots on the paper.  These visual elements are a minor detail in the grand scheme of things, but they go a long way towards reinforcing the zen-like elements of the actual gameplay.

The main mechanic of Coins is this: when moving disks towards their ultimate destinations, you must place them beside two other disks on the playing field.  That’s pretty much it.  All you have to do is rearrange disks, making sure they touch two other disks until you’ve placed them in the watermarks on the page.

Like any good puzzle game the mechanics are simple, but the actual puzzles are not.  Each level is its own little brain teaser, but you won’t come across anything that will make you tear your hair out.  With enough experimentation, you’ll be able to find the solution.  If you’re looking for a challenge though, you can challenge yourself.  An indicator on the left of the screen marks each turn you’ve taken.  Every puzzle can be solved in a minimum number of turns — think par in golf.  If you want, you can replay puzzles until you solve them in as few turns as possible. 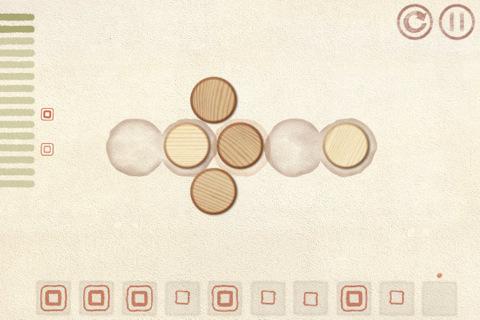 Halfway through the game, just when things might have gone stale, a new mechanic is introduced.  Disks of a darker color appear, corresponding with new, dark watermarks where they must be placed.  Instead of simply placing disks beside two other disks, these later levels demand that you place disks beside two disks of two different colors.  This ups the complexity of each puzzle, but in no way impedes accessibility.

Coins is a chill out game.  There isn’t a whole lot of it, but if you feel like killing a few minutes, relaxing, listening to music, whatever you like, then give it a go.  I completed all the puzzles in the browser version in under an hour while listening to the radio.  I had a bit of fun and it wasn’t so demanding that I couldn’t pay attention to the news while playing it.  It was, to put it simply, nice.