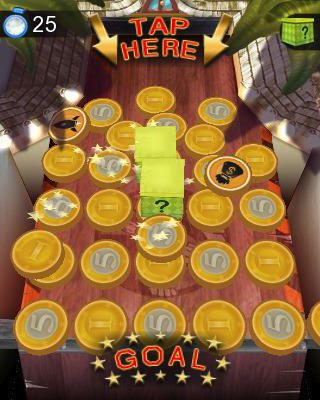 Coin push games are a childhood favourite that are almost as old as arcades themselves, and in the past few months we’ve seen more than a few of them show up on the iPhone. It’s a simple concept that could grow stale quickly, so if you’re going to do make a game like this, you’d better do it right. Thankfully Freeverse – the minds behind last year’s similarly-inspired Skee-Ball – know exactly what’s needed to make Coin Push Frenzy a daily obsession.

In case you’re not familiar with the real world equivalent, here’s how a coin pusher work. A table is covered in coins, and a “broom” pulsates back and forth, pushing forward any coins that block its path. A player drops his coin in the path of the broom in an attempt to push the other coins forward, knocking some off the edge and into the pocket of the player. There are many variations, but these basics are all you need to know to enjoy Coin Push Frenzy.

In addition to coins, Coin Push Frenzy offers virtual prizes that players can collect. Prizes come in large boxes that are dropped amongst the coins, and they also need to get pushed off the edge to be collected. Watch out, though! A gutter on both sides of the playing field means both coins and prizes can fall off the edge and out of your life forever. 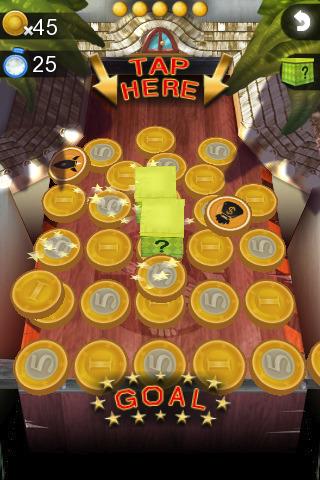 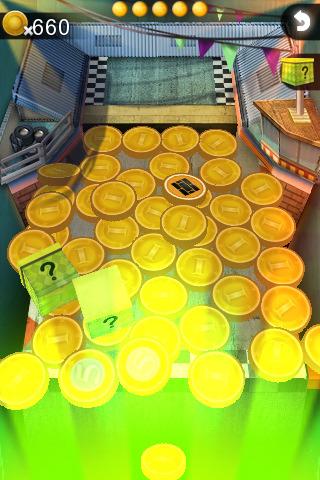 Some of the prizes will unlock new types of coins that then become part of the overall experience. Some special coins might have a higher value, for example, while others can do neat things like cause a little explosion to stir things up, or switch off the gravity temporarily. The best prizes, though? They unlock new tables.

Coin Push Frenzy currently features three different tables, though only a jungle themed table is unlocked at the beginning of the game. There’s also one with a racing theme and one set up like a Japanese monster movie, but to unlock those players will need to collect 3 specific prizes for each. Lucking into those prizes could potentially take weeks or months of playing to accomplish …or you could just pay to unlock them.

In keeping with the freemium spirit of Freeverse’s parent company ngmoco, tables can be unlocked by trading in 750 coins. Earning those through regular play seems to be a mathematical impossibility (you’ll almost always play more coins than you’ll win), but players can sink some real world dough into the app to purchase more coins. It’s a clever scheme, but from a certain angle this almost robs the game of all its fun. Sure you’d still have the incentive to try and collect all the prizes – but the big prize is opening up the new tables. Cheating the system essentially robs you of your ultimate goal. Still – so long as you’re using those purchased coins to lengthen your play experience rather than purchase the tables, it’s an in-app offering I’d welcome with open arms. 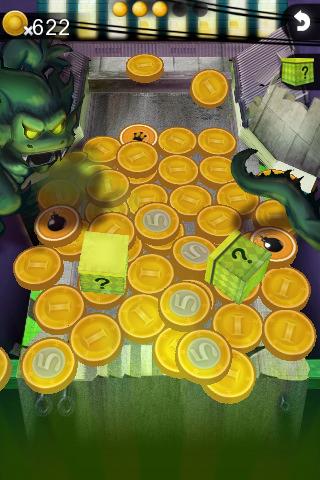 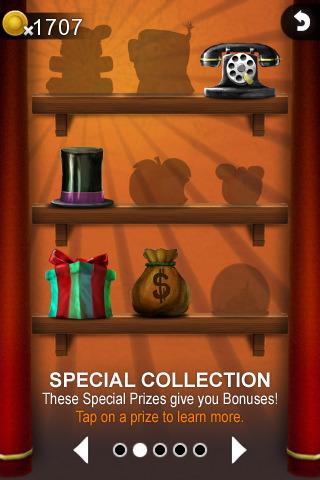 It should also be noted that you don’t have to purchase coins to keep playing – they’ll automatically regenerate at a rate of one coin every three minutes when the app is closed, and one every 30 seconds while playing (to a maximum of 50 coins).

Having the option to unlock tables the easy way isn’t the only thing we’re taking umbrage with. A current glitch means that you’re not always earning coins when you’ve put the game away, making for an unpleasant discovery when you jump back in after spending a few hours assuming you’re earning more coins. Coin Push Frenzy has also crashed for us on more than one occasion, somehow losing our stockpile of coins in the process. Still – little wriggles like this, while annoying, aren’t common and will no doubt be remedied in a future update.

Minor complaints aside, the game has a great look and feel to it that should make this an instant download for any gamer in need of a nice quick 20 second fix. The physics are spot on, providing a tiny taste of placement strategy for gamers that want it, and a satisfying “gotta catch’em all!” prizing system that everyone can love.

A worthy follow-up to Skee-Ball, Freeverse’s Coin Push Frenzy is an overly simple experience that’s embarrassingly hard to put down. With push notifications reminding you every few hours that you’re coins have been refilled, expect to be jumping into this one a few times every day.