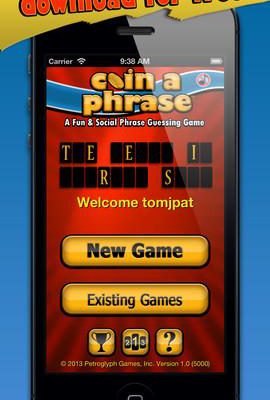 What’s in a phrase? Well, not a whole lot, as it seems. Coin a Phrase is the first mobile offering from Petroglyph Games, the people who brought us Rise of Immortals and the popular Heroes of Graxia board game. However, the extremely underwhelming and lackluster result goes to show that not every developer can make the successful transition onto mobile platforms, and that some are better off just sticking with what they know.

At its core, Coin a Phrase plays like a watered-down version of Wheel of Fortune, but without the exciting lights and sounds, or the fun of giving that big wheel a spin. Players take turns guessing letters to spell out a mystery phrase, but the catch is that you can’t see what letters your opponent has unveiled in the puzzle. Each turn, you can only pick from letters that are given to you on three randomized playing cards, which can have one, two, or three letters on each of them. More common letters like “S” and “R” will usually be on a card by themselves, while more unlikely letters like “NJW” are found in sets of three, if you’re feeling more adventurous. 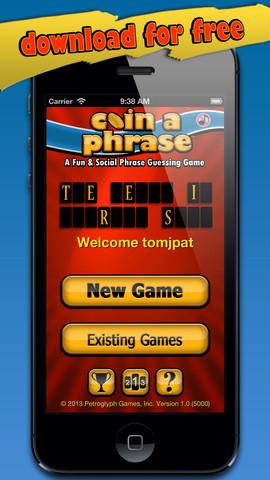 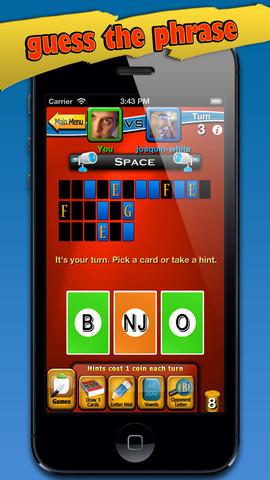 Yes, this lets you guess three letters in a single turn, but there’s a much higher risk that none of them will appear in the board puzzle. After you make your choice and the letters are revealed on the board, you’ll have the option of guessing the puzzle or passing your turn. Guess right, and you’ll be rewarded with a coin or two, and given the option of starting a rematch. And that’s about it.

This is essentially the entire game, and players can experience everything that Coin a Phrase has to offer in only ten minutes or so. There are no long-term goals or other incentives to keep you hooked and playing past the five-minute mark. The game employs the “play at your own pace” model of Draw Something and Words with Friends, and you’ll want to rack up about twenty games at once as each turn only lasts five seconds or so. Luckily, there is a very quick turnaround for all the games I’ve played, so you won’t be waiting hours at a time for someone to make their next move or finish up a puzzle. You will also be restricted to only guessing from the “Phrase” categories of puzzles, unless you’re willing to pay $1.99 to unlock better ones like “Movies,””Songs,” “Sports Teams,” and “Books.”

Each turn, before you guess your letters, you can spend a coin on one of four hints to help you come out victorious. These hints include drawing three different letter cards, seeing where all the vowels are located on the board (but not what they are), getting a hint on one specific letter of your choosing, and revealing one of your opponent’s uncovered letters. But you only start out with fifteen coins, and earning new ones comes sparingly, so a lot of the time it’s not even worth it to take the hints anyway. 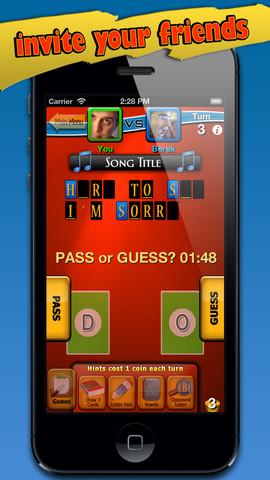 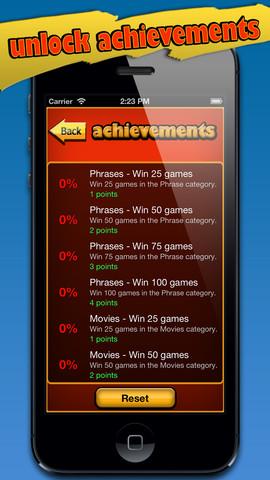 Coin a Phrase lacks any heart in visuals or design, and has about the same boring effect as playing Hangman with a pen and piece of paper. There is never any variety or interesting animations to the game board, and the ugly maroon background develops a real droning quality after a while. I wish I could use the rest of my coins to buy a new color scheme here. The game will also flood your device with push notifications whenever one of your opponents has made a move, and if you have a lot of different games all going on at once, this can get exasperating, to say the least. Given this overabundance of in-game and out-of-game notices, I found it odd that the interface doesn’t even tell you when one of your games has ended; it just silently moves it over to the finished category, where you’ll have to go and find it if you’re even remotely curious as to what the answer to the puzzle was. This poor and awkward choice in design makes for an abrupt and anticlimactic end to each game, every time.

Even though there are no technical flaws or performance issues with Coin a Phrase, it’s very hard to justify a smooth-running game that packs in so little, and that’s about as fun as its graphics are bland. Above all else, it’s just strange to me that this is the game that Petroglyph chose to make for their first foray into mobile gaming. But sadly, good intentions on unfamiliar terrain are not enough to save this one from a non-existent personality and monotonous gameplay.