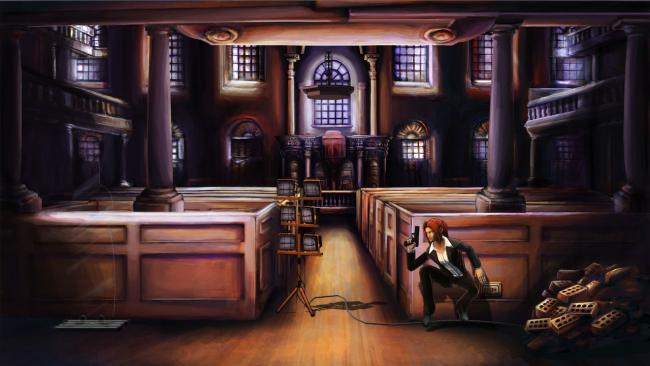 Cognition isn’t a complete disaster, but it has some pretty major problems.

Cognition: An Erica Reed Thriller follows the adventures of FBI agent Erica Reed, who possesses supernatural powers that allow her to witness past events, pull “memories” out of inanimate objects and even bring out long-forgotten memories in the minds of others. It’s an intriguing idea but it’s also a mess, brought low by clunky technology and writing and game mechanics that are completely out of place in such a dark, serious game.

The game begins three years in the past, as Reed and her partner, John McCoy, rush to save her brother from a maniac known as the Cain Killer. Reed’s powers are still raw but she’s able to use them to track her brother and ultimately free him from the killer’s deadly trap in a tutorial prologue that promises a legitimately mature effort from the team whose previous release, the King’s Quest fan tribute The Silver Lining, was anything but.

Cognition is a very conventional point-and-click adventure, featuring a simple, context-based menu providing all the interaction with the game world you’ll need. As the situation permits, you can examine objects or people, talk to them, use inventory items on them or interact with them in certain object-specific ways, such as banging on a vending machine to free a bag of chips. You also carry a cell phone, easily the most useful tool in your inventory, which serves as your calendar, camera, music player and more, and best of all allows you to send text messages to your father, who provides sage advice in what is actually a pretty clever hint system.

The hand-painted backgrounds and occasional pseudo-cinematic interludes, like the bizarre (and loud) series of images that pop up when Erica begins to lose control of her powers, look great and are quite appropriately creepy at times, too. The characters, on the other hand, do not – except for the “creepy” part, that is. They move with an impressive fluidity, but their faces are trapped somewhere between the uncanny valley and Linda Blair circa 1973. Brows furrow, eyes roll back into skulls (sometimes horizontally, which is even worse), heads swivel aimlessly and your partner’s smile is lopsided enough to be downright disturbing. The game also suffers from excessively lengthy pauses between actions, even for relatively trivial things like pulling out a chair and sitting on it, which feel odd and often interrupt the flow of the action.

Worse than the technical bumps or sluggish performance, however, is the actual gameplay. Cognition is meant to be a mature experience, spinning a dark tale of loss, horror and murder that wouldn’t be out of place next to a typical episode of Criminal Minds. But rather than the logic-based challenges you might expect, its puzzles are taken straight out of the classic Sierra Online playbook. In one sequence, for instance, you need to borrow your partner’s lighter, but for no particular reason he refuses to give it to you. You have to distract him with food, but neither the sandwich on your desk nor the chips in the vending machine will do. You need donuts, but there are no donuts in the station, or anywhere else in the city of Boston, apparently, except on the table of the antique shop on the other side of town.

The puzzles also bring out the remarkably uncooperative and even unpleasant nature of your supposed co-crime-fighters. The tech guy won’t hand over a piece of crucial evidence until you convince the medical examiner to share storage space with him; the medical examiner flat-out refuses to let you borrow her tape recorder to listen to an interview made during a related investigation a few years earlier; the guy who was so desperate for the FBI to solve his wife’s murder now refuses to speak to you unless you bring him something to munch on – but not an egg salad sandwich! He’s not that hungry, you know.

This kind of thing may have been the norm in the late 80s and early 90s, but the genre has evolved dramatically since then. And, perhaps more to the point, the early King’s Quest and Space Quest games it emulates weren’t telling blood-soaked tales of serial killers run amok. Even Erica herself is rather unlikeable at times, and her renegade style leads to moments of outright silliness, like breaking into her boss’ office rather than waiting for a scheduled meeting later in the afternoon – and which none of the highly-trained FBI agents sitting mere feet away in the outer office seem to notice.

The corollary of all that, of course, is that gamers with a taste for that kind of old-time Sierra-style adventuring may find something here to like, as long as they don’t mind a more contemporary approach to storytelling – which is to say death, forensic gore and f-bombs. But most gamers, I suspect, would rather focus on the mystery of the Hangman Killer than on the mystery of where in the city of Boston they can find someone willing to loan them a tape recorder for a few minutes.

Erica’s powers add a potentially interesting twist to the game, but they become bogged down as it progresses. Her “intuition” is simple and effective enough, but the additional abilities she picks up later in the story feel cumbersome and contrived, and rather than serving as a narrative device end up as merely a means to insert more time-filling puzzles into the action. An interrogation of a homeless man that eventually takes a turn for the supernatural leads to numerous trips around the office and the city as Erica gathers items, talks to supporting characters and even unlocks another aspect of her latent psychic ability, all while the poor guy sits alone at a table. Like so much of the game, it’s a good idea, poorly executed.

Cognition Episode 1 isn’t a disaster, but it isn’t good, either. The attempt to create realistic-looking characters proves to be more trouble than it’s worth, and the dissonant blend of style and subject matter is jarring to the point of irritation. With better writing and more focused gameplay, Erica Reed could easily become an enduring adventure game lead, but she has a long, long way to go to get there.

Fairly Twisted Tales: The Price Of A Rose Review