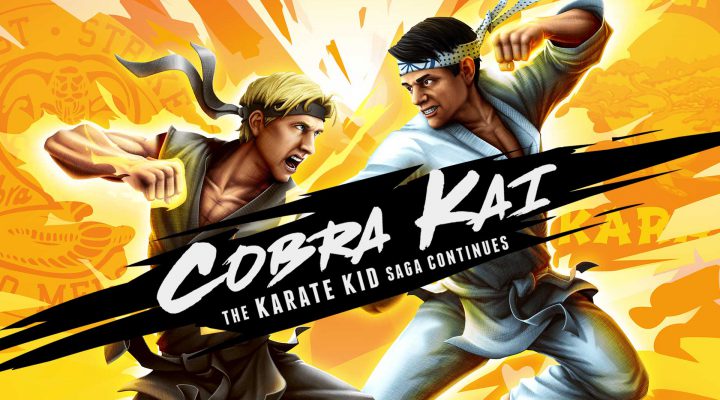 The Cobra Kai TV show has become an unexpected hit, showing that something based around 80s cliches can actually be surprisingly deep.

This videogame spin off isn’t quite as intricate as its inspiration, but still offers a far more interesting experience than anyone should rightly expect. And, most importantly of all, it’s fun.

A side scrolling brawler, it sees you playing as characters from both the Cobra Kai and Miyagi-do schools of karate. The former is more aggressive and fiery, the latter more level-headed and peaceful.

With both you just go from left to right in linear stages though – beating up pretty much everyone you see.

What’s pleasing is that there’s actually a lot more to the combat than button mashing. One button kicks, another punches – but then there are moves that you power up via combos and avoiding hits, and also environmental items you can use to take out enemies in one blow.

You can also parry foes, and sometimes this also results in knocking out everyone else nearby.

All of this – coupled with tactile feedback when you’re whaling on enemies – makes the game a lot more interesting than your average old school beat-em-up.

What is archaic here is the presentation however. Or at least the visual side. Cobra Kai: The Karate Kid Saga Continues boasts some pretty ropey looking 3D and some rather dodgy animation.

And this is a shame, as the throwback soundtrack and voice acting are top drawer. We know pixel-art visuals are a bit overdone at this point, but we can’t help but feel they would have been a more fitting choice than what the developer plumped for here.

After all, isn’t this exactly the type of game that’s going to appeal to those who love the nostalgia soaked aesthetic of pixel-art?

There are other issues too, such as the fact that levels are a tad overlong – and some performance issues do crop up when the action gets a bit too frantic.

The former can be overlooked a little when you play the game with a friend though, which is an obvious addition but still works very well – especially as the second player can drop in and out of the game as they wish.

It just demonstrates how accessible an experience Cobra Kai: The Karate Kid Saga Continues is. Unfortunately you have to look past some often baffling presentation choices to do this.

Sam & Max Save the World [Switch] Review – On The Case